This past weekend was one of the best I have had in a very long time. I got to see the movie Pan’s Labyrinth with Shelly and figment_j, then dayo came into town for a visit from Chicago, and… bliss. Snapped this pic of dayo and I at Panera Bread using the iSight built into my MacBook: 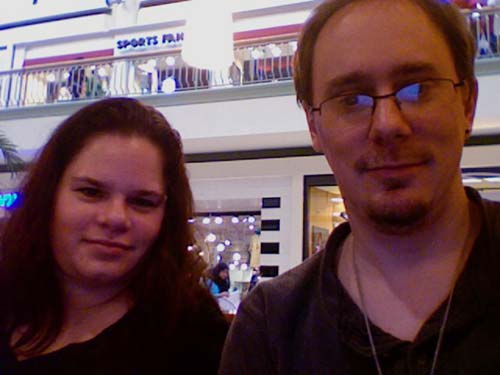 And now today I get to pay, karmically (karmacally?) speaking, for the wonderful weekend. The battery in my car has died. I know a dead battery when I see one, and I’m looking at one right now. It’s stone dead. It’s definitely deceased. It wouldn’t “voom” if you put four million volts through it. It’s bleedin’ demised. It’s passed on. My battery is no more. It has ceased to be. It has gone to meet its maker. It’s a stiff. Bereft of life, it rests in peace. It’s shuffled off this mortal coil, run down the curtain and joined the bleedin’ choir invisibile! It is, not to put too fine a point on it, an ex-battery.

This presents, as you may surmise, certain practical and logistical difficulties. Not insoluble ones, as I drive a car with a manual transmission, but difficulties nonetheless. Quite frustrating it is, especially seeing as how, at this late hour, I have little choice but to procure a new battery at the altar of consumerist greed and avarice that is Wal-Mart, and I loathe all things Wal-Mart almost as much as I loathe large, soulless corporations that have forgotten their ethical roots and become little more than gigantic, indifferent profit-vacuuming machines willing to do almost anything and commit almost any atrocity in their quest to improve the bottom line.

But I repeat myself.

And now, gentle reader, I am off, to leave work in quest of a battery that has not shuffled off this mortal coil. I was going to make a pun on the phrase “aggravated battery,” but restrained myself at the last moment. Consider yourself fortunate and escape while you still can.

10 thoughts on “Paying for my sins”