More and more often, when I pump gas at a gas station, I see warnings on the gas pumps advising motorists to turn off their cell phones: 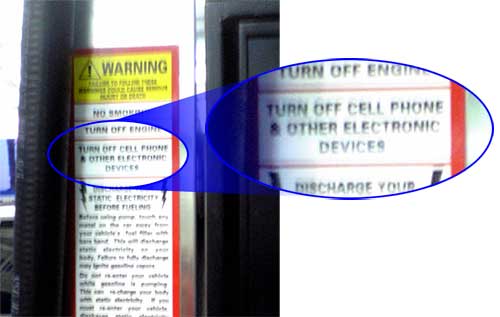 Supposedly, this is to prevent fires. Everyone knows, after all, that sparks from a cell phone can cause gasoline vapors to ignite and start a gasoline fire, right? I mean, there’s even an Internet email circulating that talks about how cell phones can start gasoline fires, right? So it’s only wise to put up a warning about cell phones on gas pumps, right?

Hell, the Discovery show Mythbusters attempted to use a cell phone to ignite a gasoline fire, and failed. In fact, they filled a pressurized chamber with gasoline and oxygen, disassembled the cell phone so that its battery and electronics were exposed directly to the gasoline vapors, and still failed.

Which is about what anyone who knows anything about electricity would expect.

If gasoline could be ignited by a cell phone, then you’d expect explosions left and right just from filling a car. You see, your car’s electrical system is powered by a big, high-capacity battery, far more powerful than the puny battery in a cell phone…and your car’s electrical system is still active even when the engine is not running. After all, if you’ve ever replaced your car’s battery, you know that your radio loses all its presets and your clock gets all scrambled when you take the battery out.

Even when it’s just sitting parked with the engine off, your car is consuming far more power than a cell phone. There’s far more likelihood of arcing, because the voltage and current present in your car is far greater than that in a cell phone–but your car doesn’t blow sky-high every time you refuel it!

But what about that CBS News story about a fire in New York that was triggered by a cell phone–you know, the one that quotes the fire marshall as saying “Don’t use their cell phones when they’re pumping gas. Really, it’s deadly.”?

It’s bunk. In fact, the fire marshall CBS quoted has actually come right out and said “”After further investigation of the accident scene and another discussion with the victim of the May 13 gasoline station fire in New Paltz, I have concluded the source of ignition was from some source other than the cell phone the motorist was carrying.”

Yet this particular urban legend is so common, so widespread, and so often believed that a state senator in Connecticut wants to pass a law banning cell phone use at gas stations.

As urban legends go, the cell phone legend is a good one. It preys on fear, as all good urban legends do; it relies on the fact that people know a little bit about electricity (electricity can make sparks, sparks can start gasoline on fire), but not a lot; it sounds plausible to someone who knows a bit but has no real background in electronics (which is to say, most people).

Yet there has never been one single confirmed case of any cell phone ever starting a fire, and attempts to start fires intentionally with cell phones have always failed. Put most simply, a cell phone can not start a fire without being attached to a detonator of some sort.

That’s a common technique used by insurgents in Iraq, by the way–rigging a cell phone to an electrical detonator and then setting off a bomb by sending a signal to a cell phone–but I don’t know anyone who’s carrying a cell phone modified to be connected to a detonator, and can only assume someone who had such a thing most likely wouldn’t be chatting on it while pumping gas. But I digress.

The picture of the cell phone warning at the top of this post is pretty crappy quality, and for that I apologize. I didn’t have my good digital camera with me while I was filling my car, so I took this picture with the camera in my cell phone.