Skip to primary content
The catholic girls now, stark in their dark and white
Dread in monochrome, the sisters of mercy
High tide, wide eyed, sped on adrenochrome…

Friday, Shelly and I got gothed out and headed to Orlando to meet up with friends at a Sisters of Mercy show. Shelly now has a Catholic schoolgirl uniform, which she wore for the first time that night…and no, you don’t get to see any pictures, neener neener.

Good show, all in all. I’ve never seen Sisters before and never been to the House of Blues before. House of Blues is a weird venue, in that “corporate rock meets gospel with a touch of urban decay” sort of way; they try really hard to give the place atmosphere, honestly they do, but a corporate chain’s idea of “atmosphere” always comes off in much the same way (witness Sony’s corporate idea of “cool,” the Metreon in San Francisco, and you’ll see what I mean.) House of Blues is decorated in a kind of “folk art with a vaguely nonthreatening gospel theme and AK-47s” style, and features television monitors that run ads for HOB merchandise on a loop–even during the show. But I digress.

Opening for Sisters was a goth band called Warlock. Picture a group of avid, hardcore D&D gamers who get together one day and say “Hey, we should start a band! And…and…we’ll call it ‘Warlock,’ ’cause that’s like, the most goth name ever! And we can practice in my mom’s garage!” ‘Nuff said.

We are few, and far between
I was thinking about her skin
Love is a many splintered thing, don’t be afraid now
Just walk on in

We met up with smoocherie there. She’s decided she’s moving to California for sure, which means that the relationship between us is about to become long-distance.

And that right sucks.

She seems to be quite good at maintaining long-distance relationships. Evidence would suggest, however, that I am not. One could argue that we have a long-distance relationship now; she lives on one side of the state, and Shelly and I live on the other, a good several hours away…but we still see each other nearly every weekend. Opposite sides of the country makes that more…difficult. I don’t know yet how this will work.

I hear the roar of a big machine
Two worlds and in between
Love lost, fire at will
Dum-dum bullets and shoot to kill,
I hear dive bombers, and empire down

My archnemesis datanode and I have remarkably similar desires for the world, all things considered. At the concert, we began negotiating a temporary truce, at least until such time as the Apocalypse comes. The idea of stalking him from within a steel exoskeleton across the shattered ruins of a post-apocalyptic world just seems so much more…satisfying than stalking him across a Wal-Mart parking lot, you know? And perhaps, if we learn to work together, we can pool our talents and help bring about that arclight-illuminated future nightmare of twisted steel and broken concrete that much sooner.

Besides, with the money I save on the swarm of self-replicating nanorobotic hunter-killer machines, maybe I can get a new G5 Quad computer this year.

We spent the remainder of the weekend with smoocherie who has a Dance Dance Revolution pad for her Playstation. I’ve never understood the cultural phenomenon of DDR, much as I’ve never really understood the cultural phenomenon of “Friends” on TV, but Shelly seemed to think it was great fun. Somehow, things went from that to ballroom dancing, and Shelly (who’s taking a class in it) was showing some things to smoocherie (who’s planning to), and this involved me “being a guy” by, evidently, standing there and raising my arm periodically so that one or the other of them could twirl underneath it.

Which is an interesting metaphor for life, when you think about it.

Sunday saw a PolyCentral meeting, which S was actually able to make. We realized that this represented the first time since I’ve been romantically involved with Shelly, smoocherie, and S that all of us have been in the same room together, so we took a picture outside the restaurant to mark the occasion: 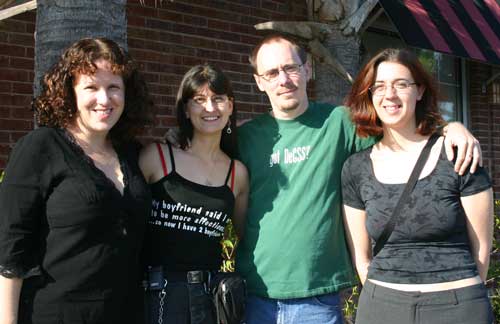 Long-distance relationships seem to be an ongoing theme here.

S is wearing a T-shirt reading “My boyfriend said I should be more affectionate…so now I have 2 boyfriends.” She has an online shop where you can buy it and other designs here.

And part of the problem is that there is a certain approach to polyamory that seeks to box and contain things before they even exist: “Well, I already have a Primary relationship, and my Primary and I are reluctant to face our own insecurities and jealousies, so we’ll deal with them by making damn sure we let everyone else foolish enough to get involved with us that they are Secondary, not Primary, and that our Primacy will always reign supreme. Because, y’know, that’s the only way we can do this without being jealous, right?”

And lest you think that there’s a contradiction between wanting to define a thing and not wanting to box it in: defining a thing merely describes the reality of the form it has taken; it does not assign a shape to it.

Relationships are with people, and it is hard to see people for who they are if you’re too scared to talk about what you see and too jealous to let relationships take their natural form.

Sunday evening, S introduced us to some friends of hers (visiting, natch, from California). Her friends do not self-identify as “polyamorous,” and are supremely uninterested in having anything to do with the organized poly community at large. They are, however, cut in many ways from the same cloth as Shelly and I in matters related to romantic relationships; their refusal to identify as “poly” comes not from the fact that they’re monogamous but rather from a very similar frustration that Shelly and I are beginning to feel with polyamory as it is often practiced within the poly community.

Meeting them was absolutely delightful, and talking to them was natural and effortless. It’s nice, sometimes, to see a shared commonality in approach in someone.

We all–Shelly, smoocherie, S and her friends, and I–wandered around a shopping mall for a bit, then ended up at a combination ice cream shop/miniature golf place for a while. I realized that I haven’t taken a picture of myself since Shelly got at me with a set of electric trimmers, so I slipped into the restroom to rectify that: 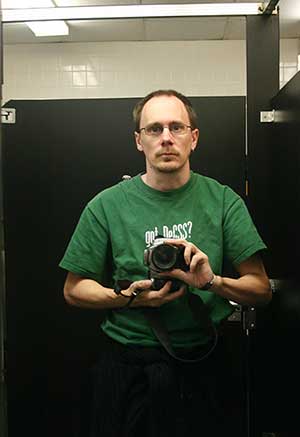 I think I like the short hair. It’s…err, growing on me.

And finally, because this is LiveJournal and LiveJournal is ultimately all about pictures of cats, I give you: 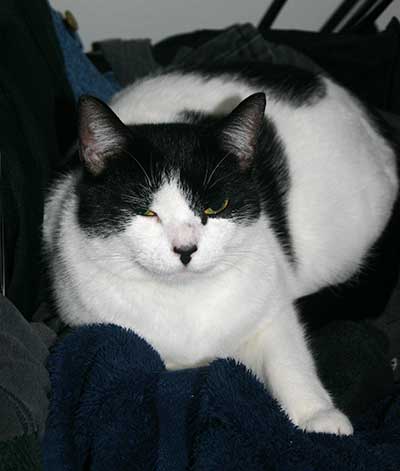 And now, to work.

58 thoughts on “Flowers on the razor wire: or, how the weekend went”