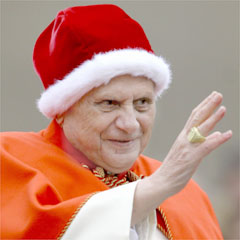 Pope Benedict XVI, Dark Lord of the Sith, addresses the Imperial Senate moments before permanently dissolving that troublesome body. The last remnants of the old Republic have finally been swept away…