So. We’re back from DragonCon in Atlanta, the science fiction convention we were going to, then weren’t going to, and then at the last minute were going to again. We visited Atlanta while Hurricane Frances was beating up Tampa, more’s the better.

Shelly got Borged out and made an outfit out of saran wrap, which was great fun: 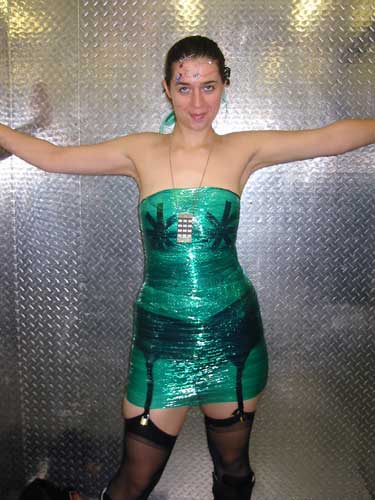 Lots of other fun photos, of zombies and faeries and cyborgs and carbon nanotubes and zensidhe getting assassinated, cut for your viewing pleasure…bandwidth-intensive and probably not work-safe. 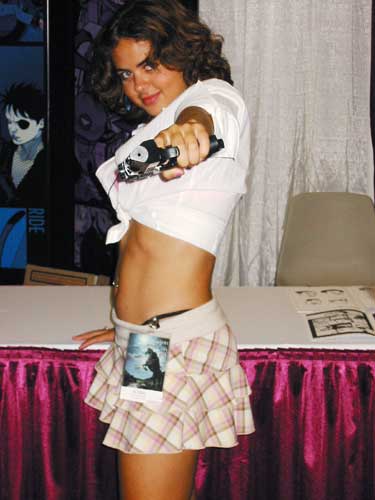 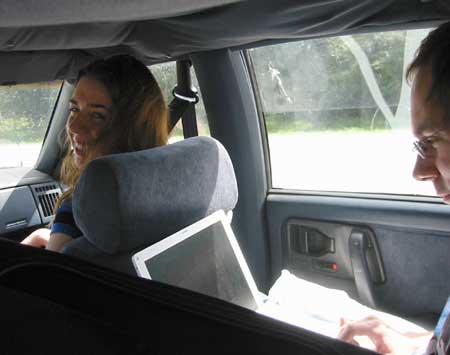 The drive up, in a car with no AC and a bad starter motor. We drove up with a friend; that’s Shelly in the front, and me spinning tunes on my laptop (which was the world’s largest iPod for the trip) in the back. 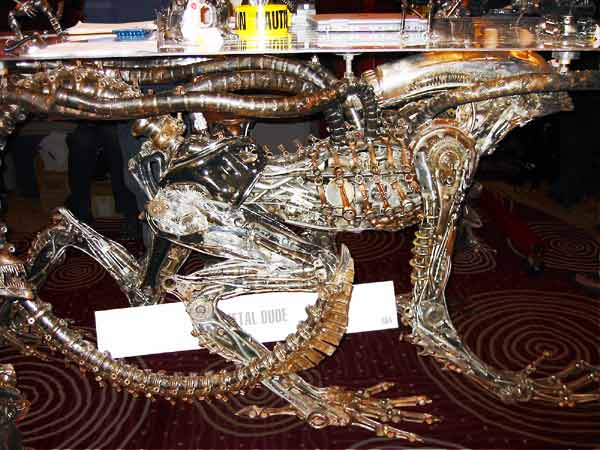 This thing ROCKS! The photo can’t do it justice, but it’s a conference table, supported on the back of an alien from the movie Alien, about 7′ long and made entirely out of metal bolts, nuts, tools, car parts, and the like welded together. The level of detail on this thing is incredible. It’s made by Metal Dude. I don’t know how much they want for the table, but it’s not enough. 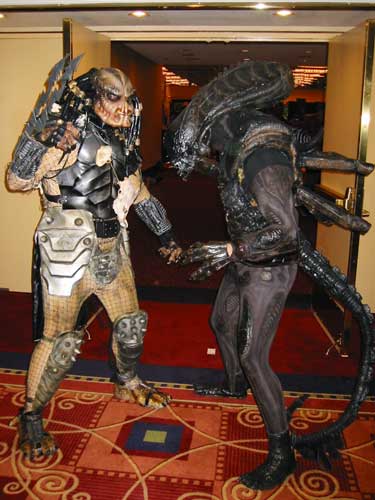 A surprising number of Predators wandering aound. Only a couple aliens, though. 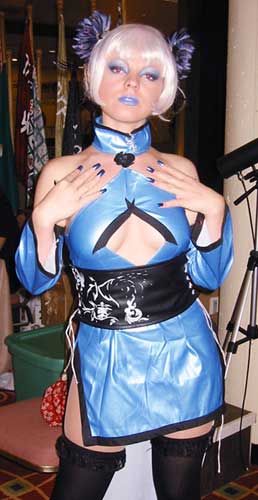 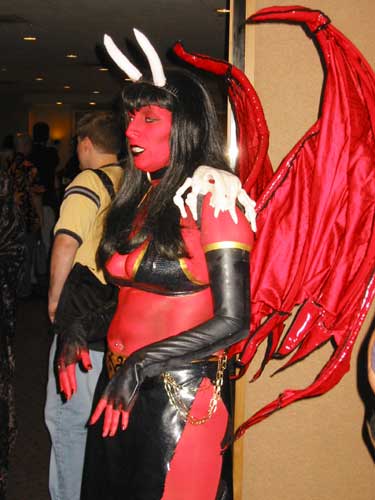 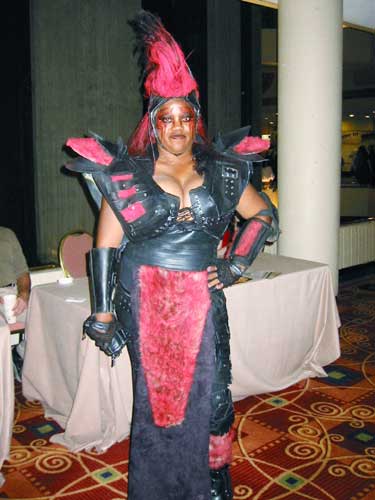 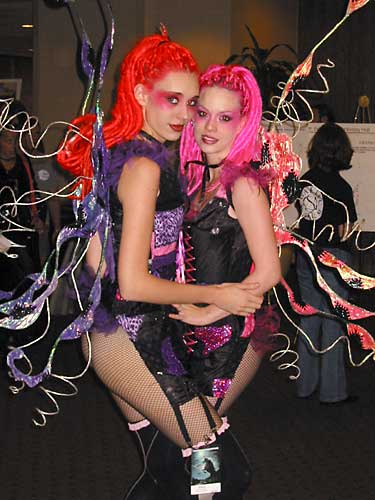 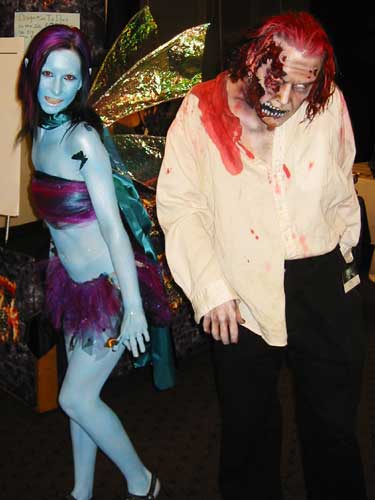 A bunch of random people.

The cryonics panel. The guy who’s been cut off on the left is Ralph Merkle, who’s an expert on computer security and nanotechnology, a board member at Alcor, an expert on cryonics, and a very, very cool guy. I got the opportunity to talk to Dr. Merkle at length after the panel and at various other times during the convention. He’s smart, accessible, and generally an awesome guy.

datan0de somehow managed to get onto this panel. See if you can pick him out. (Hint: One of these things is not like the other…)

And while we’re on the subject of datan0de: 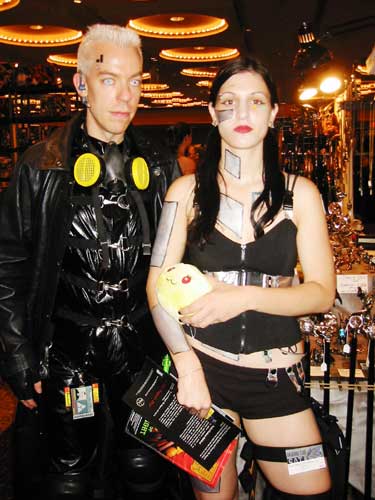 datan0de and a random cyborg wandering through the dealer’s room. 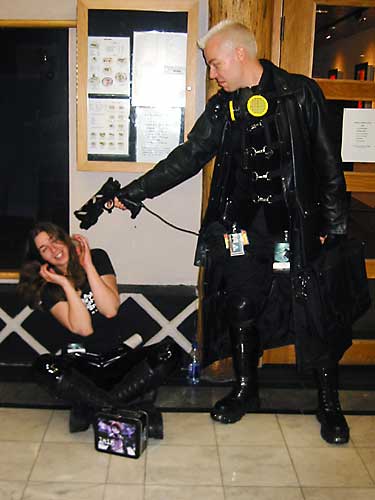 datan0de about to assassinate Shelly at a nearby mall, in front of the sushi place. 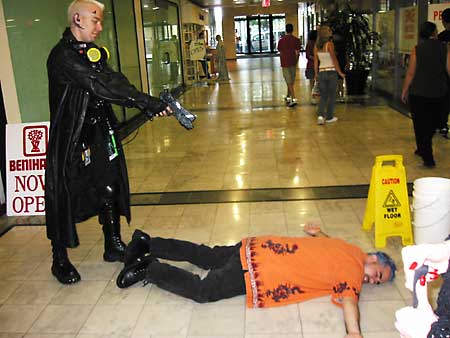 datan0de just after assassinating zensidhe, same mall. The Atlanta locals appear to take this sort of thing in stride. I guess when you live in the Sprawl, there are just some things you come to expect. 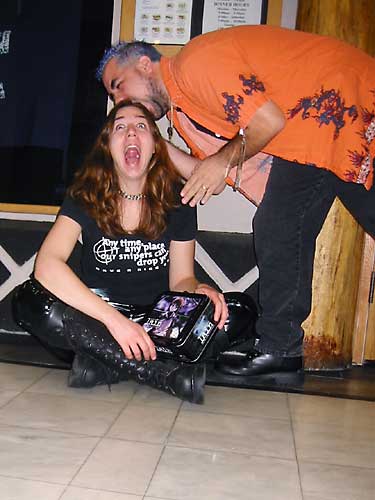 zensidhe devouring Shelly’s brain after reanimating as a flesh-eating zombie. It wasn’t a good trip for Shelly… 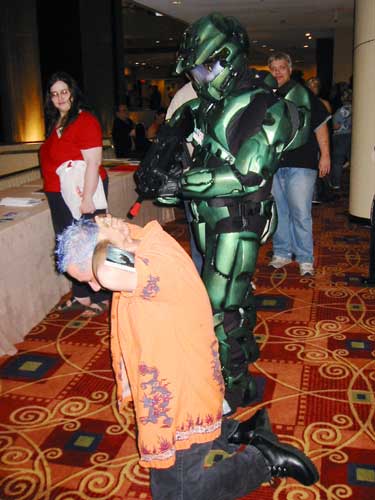 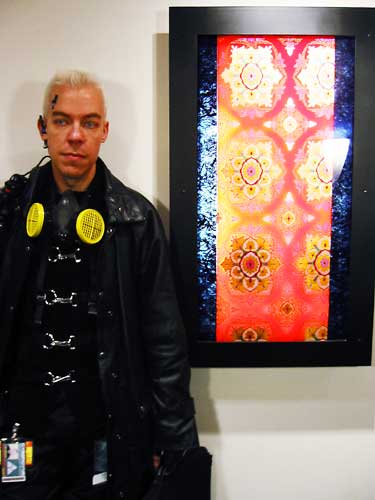 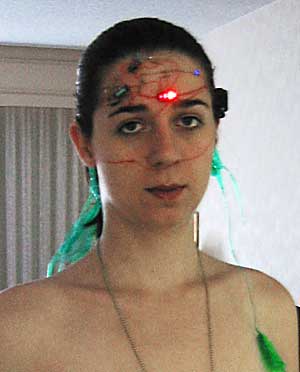 The Borg gear on Shelly. It’s a completely functional electronic circuit I constructed directly on her face, with a blinking LED display and flashing blue light and battery and all. This is a time-lapse photo, the light effects don’t come through in the other pics.

We met Elonka, something of a celebrity in cryptographic and hacking circles, at a panel, then ran into her again later…she rather liked Shelly’s Borg gear. 🙂 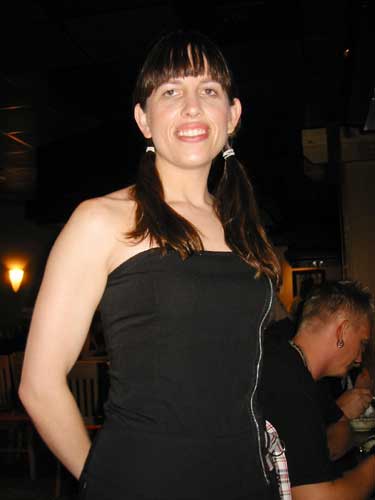 Finally got to see the “other” girlfriend again! Haven’t spent time with her in waaaay too long. 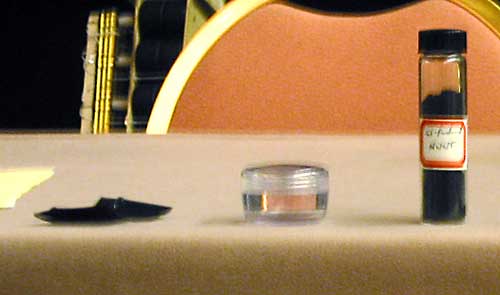 The black plastic n the left is impregnated with carbon nanotubes, and is remarkably strong for its size. The container in the middle holds a hair-thin, 5-meter thread of nanotube-impregnated material; the vial on the right is 95% pure carbon nanotubes. This material is getting set to revolutionize materials science; it’s lightweight, many times stronger than steel, and finally becoming easy to manufacture. This is big stuff–bigger than the leap from the Stone Age to the Iron Age. 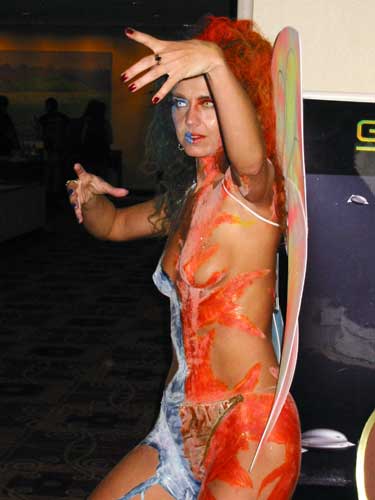 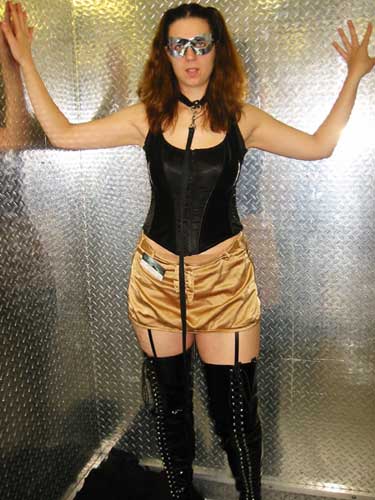 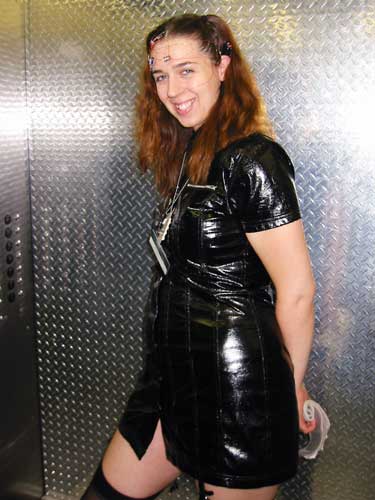 Shelly again, in the freight elevator of our hotel. True story: the hotel we stayed in, located just feet from one of the convention hotels, was hosting–of all things–a Fundamentalist convention for senior citizens while DragonCon was going on. 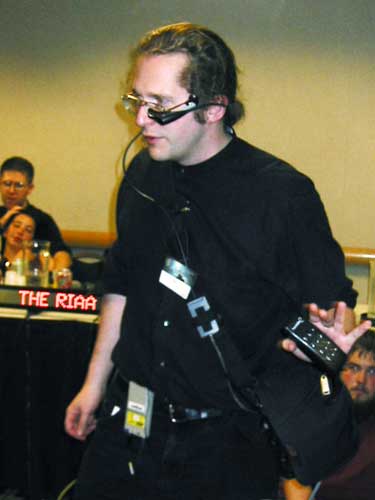 A wearable computer, with a head-mounted display and keyboard. The keyboard is quite unusual; only a small number of keys, and you access letters by holding down various combinations of shift keys. Supposedly, it takes about 4 hours to learn to type on it, and a user becomes proficient much more quickly than on, say, a QWERTY keyboard. The person wearing it in this photo can reach 130 words per minute typing on that thing.

I had a chance to try out the head-mounted display. It’s limited resolution (640×480) and expensive ($2,000), but it’s an amazing piece of work. It creates a perfect illusion of a large monitor floating a couple feet in front of you; it’s razor-sharp, crisp, and easy to read. The computer itself is an 800MHz Pentium 3 with a gig of RAM and 20 gigs of hard drive space, running Red Hat Linux.

Edit: You’ll notice the moving marquee in the background says “THE RIAA”. That’s because minutes before this pic was taken, datan0de got his hands on the controller for the sign, and I suggested he program it to say “All your base are belong to the RIAA”.

We came back to find our power was out, and had been out all weekend; without power, it was about 97 degrees in the apartment. Fortunately, power was restored a day later, though we lost everything in the fridge. We ended up driving back straight through the hurricane, which was a lot of no fun, but it was worth it nevertheless. Next year, we’ll have enough lead time to plan a few special things for DragonCon. 🙂

26 thoughts on “Cyborgs, half-nekkid chicks, and transhumanists, oh my!”