My word, nothing good ever comes of crossing His Steveness, Mr. Steve “I’m brilliant and charming and charismatic but also kind of psycho” Jobs, does it?

IDG, which hosts MacWorld, moved MacWorld from New York to Boston this year. His Steveness doesn’t like Boston, and threatened to pull Apple out of MacWorld. IDG called his bluff…

…’cept it wasn’t a bluff. Apple pulled out of MacWorld Boston.

And so did almost every other major vendor, once everyone heard that Apple wasn’t going to be there. It was slightly surreal; there were, like, 5 people there. (By way of comparison, MacWorld San Francisco normally fills Moscone Convention Center, and the last MacWorld in Boston, in 1992, completely filled both of Boston’s convention centers.)

Here’s a pic of the exhibit floor: 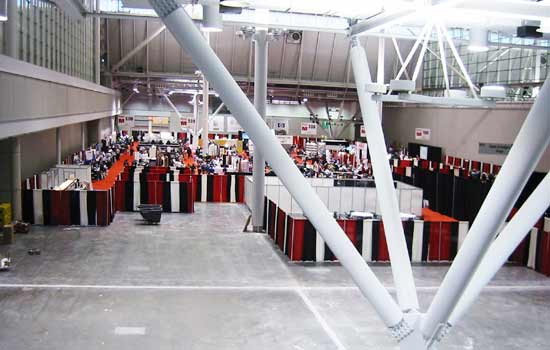 That’s it. That’s the whole thing. You could cover it in ten minutes.

Fortunately, a friend of mine hooked Shelly and I up with free conference passes, else I would have been right pissed about paying money for such a dismal thing.

IDG cried “uncle” and is moving back to New York.

Pity, too–I was hoping Apple would make a formal announcement about the G5 iMac.