…and you’re guilty, too!

Now that the annual report that’s been hanging over my head like the sword of Damocles all week is almost ready to go to the printer, I can actually write about my weekend.

Shelly and M were both able to spend Valentine’s weekend with kellyv and I, which was absolutely delightful. My own rant aside, M found a perfect Valentine’s card for all three of us; it said “Our relationship might not be what other people expect, but it works for us.” 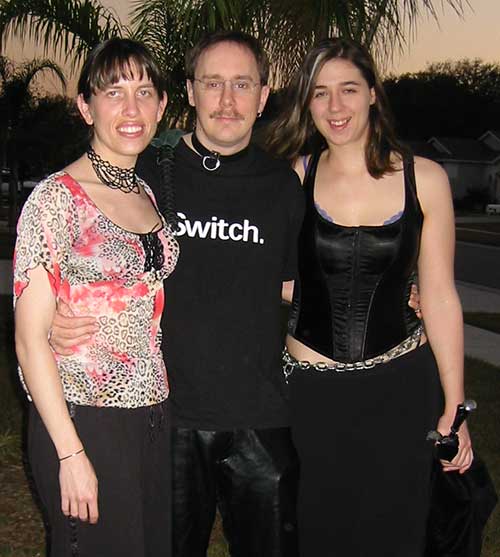 M and I had the opportunity to tie Shelly to a St. Andrew’s cross and take turns whipping her, whihc was quite a treat. Afterward, we watched a lovely demonstration of fire play, given in part by a woman who could easily be the twin of Carrie Ann Moss’ character “Trinity” in The Matrix.

M has a talking Stich doll from the movie Lilo and Stitch.

The toy has voice recognition circuitry in it. Whenever you talk to it, it talks back, if it understands what you’re saying. You can tell it things like “You’re naughty!” or “Aloha, Stitch!” or “Can you play?” and it will respond to you.

Upon our return from Ft. Myers, kellyv watched while Shelly and I used the violet wand on M. Stitch sat in a corner, ignored; and whenever M screamed, Stitch would say, “WhatEVER!” Clearly, Stitch did not appreciate the situation one little bit. Foolish little stuffed talking alien. I think he has some unresolved internal issues.

I’m your fear, I’m your monster
What’s hiding in your shadow…”

These views are not shared by everyone who belongs to Po lyTampa. One trait I have in common with kellyv is that if someone says something I disagree with, I tend not to keep my mouth shut about it.

This at times makes me the bad guy–the one who says “Well, yes, that looks great on paper, but pitchfork it into the world of things that exist and it’ll turn to shit faster than you can say ‘Communism was just a red herring.'”

Which is fine. I don’t mind playing the bad guy.

Afterward, we went out to dinner with several friends, including smoocherie and fritzcat66. kellyv and I have been spending significantly more time with them since Shelly and I started dating, which has been nice.

So violently to touch, it’s tearing me down
So beautifully to clutch is what you believe

This weekend, kellyv and Shelly want to go get tattoos. We’re also considering a trip to the Castle, possibly with smoocherie. Saturday, sunyata__ has invited us to a party, though it’s still up in the air whether or not we’ll be able to attend–I would certainly like to, however. And at some point, I plan to spend some “alone time” with kellyv. Things have been so hectic lately, it’s been difficult for us to meet our recommended daily allowance of together time.