A motte and bailey argument is an argument in which you believe something, but you don’t really have a good justification for it. So when you’re attacked, you retreat into a different, much more specific belief, for which you do have a good argument. When the attack is over, you come back out to your original, more general belief, the one that’s harder to justify.

An example of a motte and bailey argument I hear in polyamory circles all the damn time is this one:

“You need to have a veto in your relationship if you want your primary relationships to stay healthy.”

“So you agree, all poly relationships need veto.”

The Motte and Bailey argument comes from a style of fortification called a “motte and bailey,” which is a place where an area of land that’s difficult to defend (the bailey) is overlooked by an easily defensible structure (the motte). If raiders or an enemy army or whatever show up, you evacuate the bailey, bringing all the people into the motte. The he motte can be defended from attack. When the attached tack is over, everyone goes back out into the bailey.

Okay, so now that you’re up to speed…

The town of Lincoln in northern Britain is home to a motte and bailey castle, called, appropriately enough, Lincoln Castle. Naturally, I had to visit.

Lincoln Castle was built somewhere around 1068 or so, and has been in use continuously ever since. It’s an unusual motte and bailey structure in that it actually has two baileys. The motte is a smooth, round valley between two hills. Naturally, since if one is good, two must be better, William the Conquerer built two baileys, one on each hill, and there you have it.

Originally, the motte was completely enclosed by a wood fence, and both baileys were built of wood. It was replaced over the years centuries with beefier fortifications of stone. Today, nothing remains of the original wood structures.

Lincoln Castle is still in use today–the castle is now the courthouse and, from what I gather, capitol building for Lincoln. The rest is an open-air museum. We had a blast running around the place. 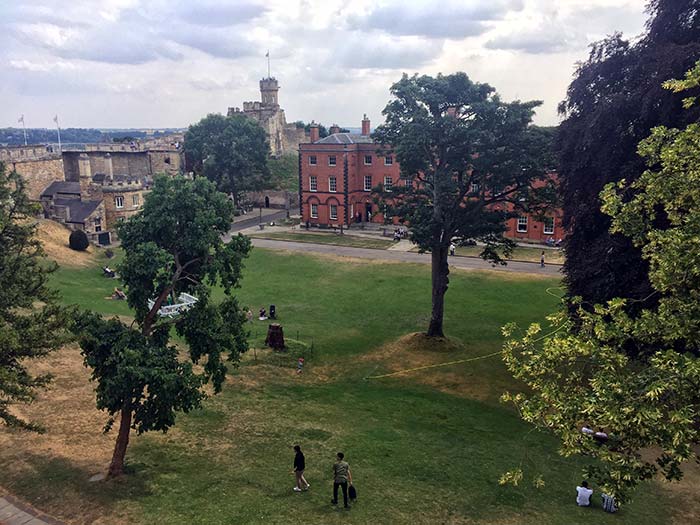 Here’s a view from one of the two mottes, looking down into the bailey. The round structure on the left is the fortified gate through the outer wall. The red brick structure to the right is an old Victorian-era prison. The round tower in the background is the second motte, because you know what they say about mottes: you can never stop at just one. 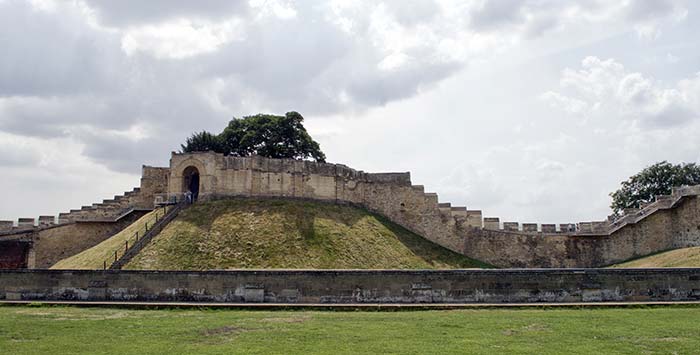 Here’s what’s left of the second motte, seen from the middle of the bailey.

As soon as I found out that Lincoln Castle has two mottes, I immediately, on that very spot, registered the domain name twomottesonebailey.com — though I have absolutely no idea what I will use it for. Suggestions? 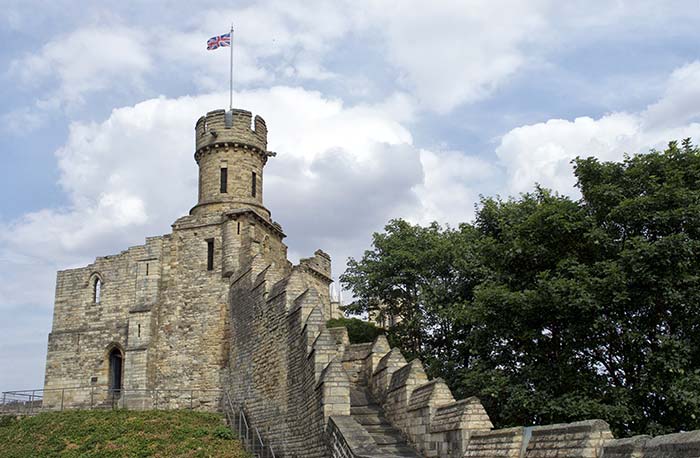 The second motte, which is in much better shape than the first. The tower still exists, though most of the rest of it is now a broken, hollowed-out shell in which it would be tremendous fun to film a cheesy low-budget movie. 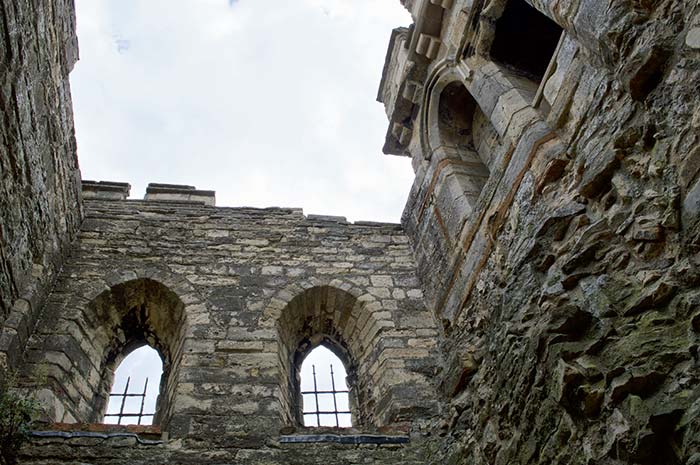 See what I mean? This place is just screaming for orcs or spectral knights or some sort of special effect where mist flows through the windows before congealing into an undead sorceror or something. 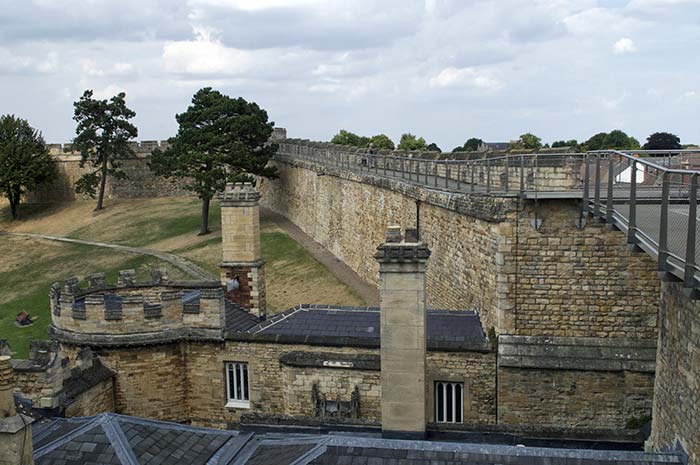 The fortification has two gates, one on each side. Breaking in through one of these gates would be a nontrivial undertaking for sure. In the background, between the two trees, is a place where the wall widens into a large round structure that contains cells where prisoners due to be executed were chained up prior to being hanged–more on that in a minute. 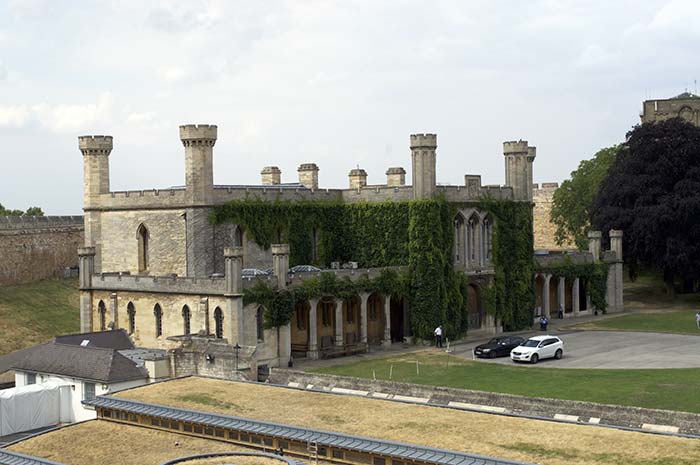 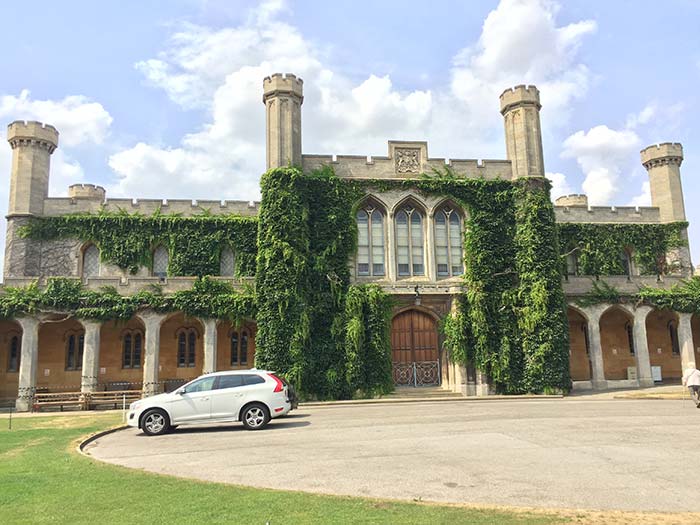 Here’s the actual “castle” bit of Lincoln castle. It has been the administrative center and courthouse for Lincoln for…oh, for longer than the country I live in has been a country, honestly. It’s still used today, which is why I have no photos of the inside. Tourists aren’t allowed in, being that it’s a functional courthouse and all. 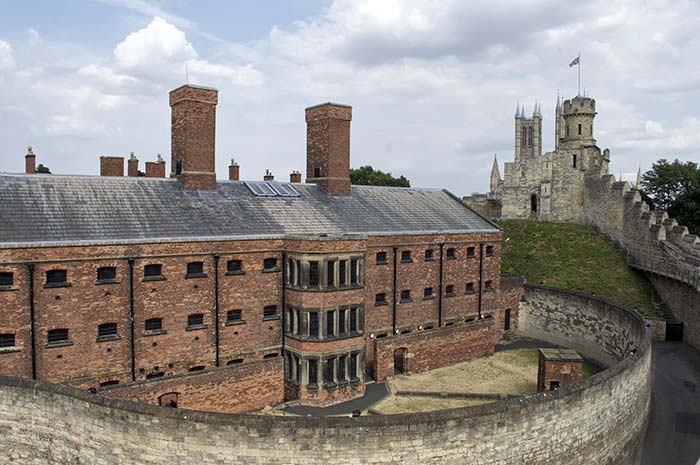 The Victorian prison. Touring this was interesting. Whenever I see something like this, I always wonder how many innocent people were sentenced here, and how many people ended up here for political rather than criminal justice reasons.

The inside had rather more windows than I expected, though I suppose in an age without electric lights, that makes sense. 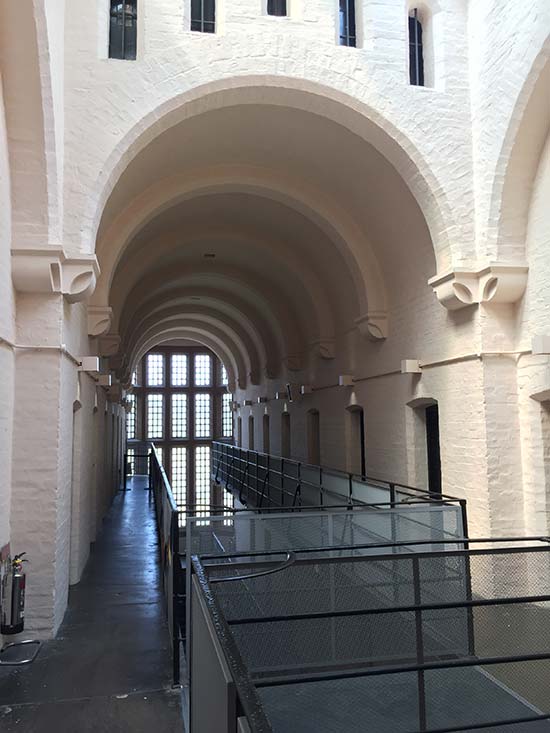 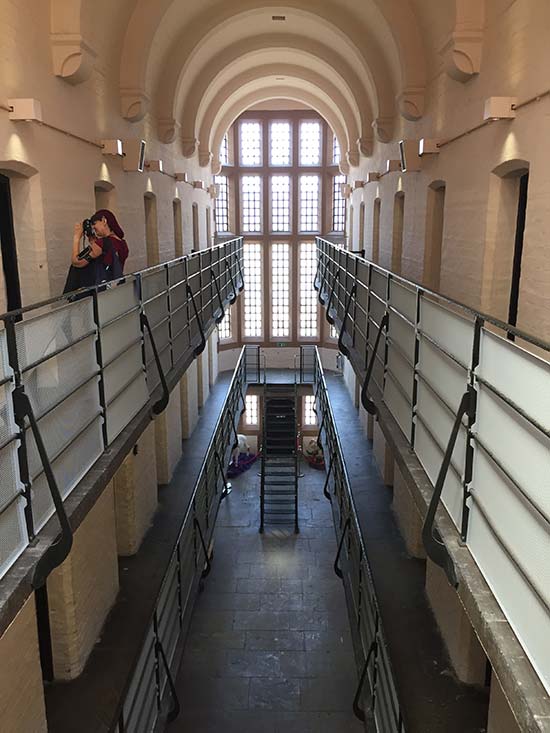 Prisoners were kept in cells lining both sides of the stacked corridors. The building is divided into two halves, one for male and one for female prisoners. More on that in a minute, too.

Some of the cells were used by the prisoners to do tasks like washing laundry, making bedrolls, or stamping license plates. 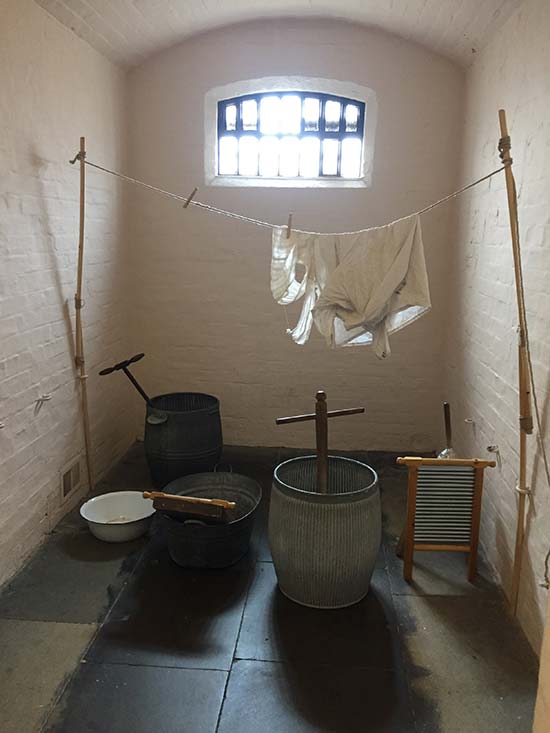 This left fewer cells for actual housing of prisoners, so they were stacked in like cordwood. 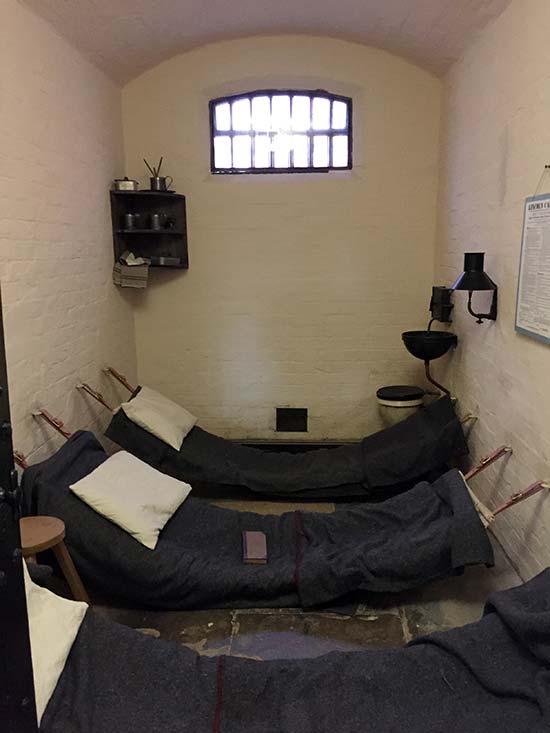 Though to be fair, I have stayed in a hostel whose accommodations were roughly similar.

This being Victorian times, God was kind of a big deal (those Victorians were quite the bunch of God-botherers, even as they did the most ungodly of things), so of course the prison had a chapel, and of course, attendance was mandatory. 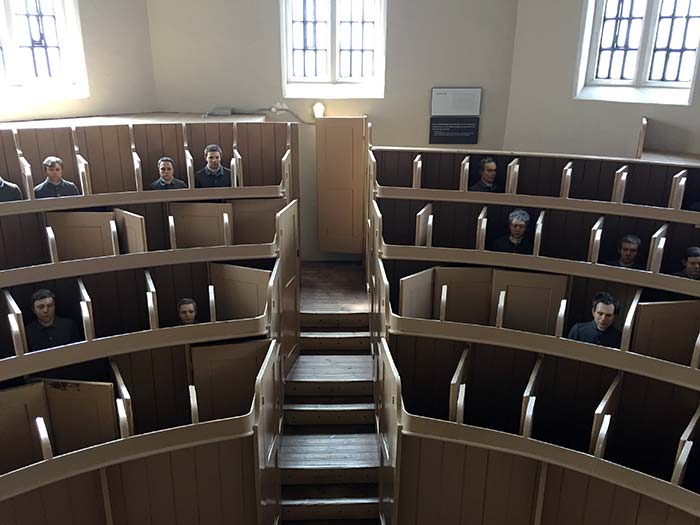 Each pew was a separate room, divided from its neighbors by a little door, presumably to make it more difficult for the prisoners to shank each other during services, that being considered rather uncouth and all. The prisoners could not see each other, but the person delivering the sermon could see all the prisoners, cleverly combining the functions of a chapel and a panopticon into one (a Chapelopticon? Panchapelcon? I don’t know). Thus do we see religion reflected in architecture. God sees you, so stop doing that thing you do with your private parts ands that feather duster, you pervert.

I was, while we toured the prison, engaging in cybersex with a lovely woman who lives in Waterloo, Ontario, which was a bit freaky. I have now imprinted on Victorian prisons as arousal triggers. There’s no way that can go wrong.

So yeah, executions. The Victorians were big on ’em. They’d kill you just as soon as look at you. Steal something? Say something bad about the king? Poke a badger with a spoon? You’re a dead man walking.

Or women. They were remarkably egalitarian in the judicial application of death.

They had special cells in that bulge in the wall I mentioned earlier. They look like this: 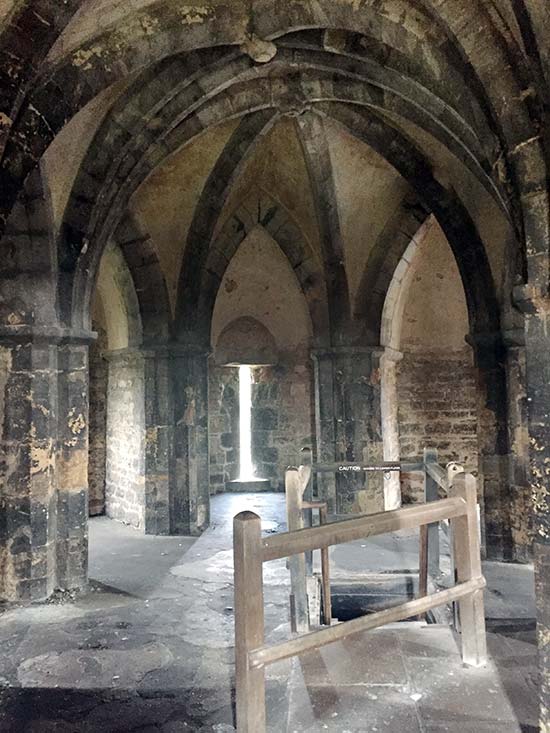 Each one had a steel ring set in the wall, to which they would literally chain the condemned. 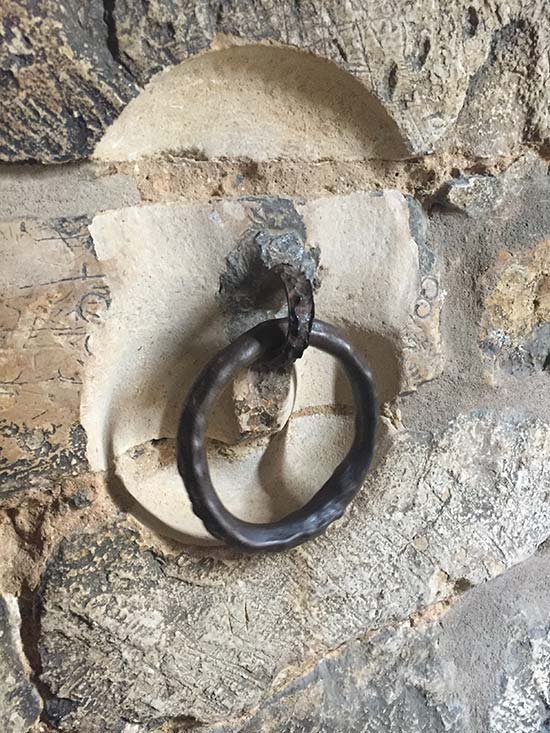 On the appointed day, after the crowds had gathered, they’d unchain the people, lead them out into the bailey, and kill them for the entertainment of the guests justice and peace of the land.

And yes, there were crowds. Big ones. People who lived in houses near the walls would rent out second-story rooms with a view at exorbitant rates to folks who wanted a good view. Apparently, there was a full-on riot on execution day when the star of the show had ruined everyone’s entertainment by committing suicide earlier on–the people demanded to see someone be killed, but the prison didn’t have anyone else to kill that day, and it was all a hell of a mess.

I guess that’s what happens before the age of Marvel superhero movies.

So anyway, one of the Victorian prison wardens was a man of Science, who installed a telescope in one of the mottes so he could look at the stars. Err, yeah, that’s right, the stars. To look at. In the sky. Stars.

Remember how I said the prison was divided into a male and a female wing? Female prisoners were kept in the back, and allowed into an outdoor courtyard behind the motte. 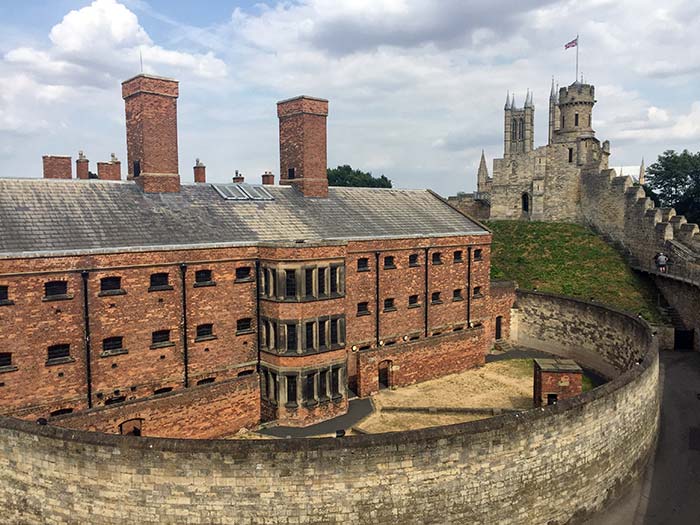 Here’s a view from the observatory the warden built for his telescope. 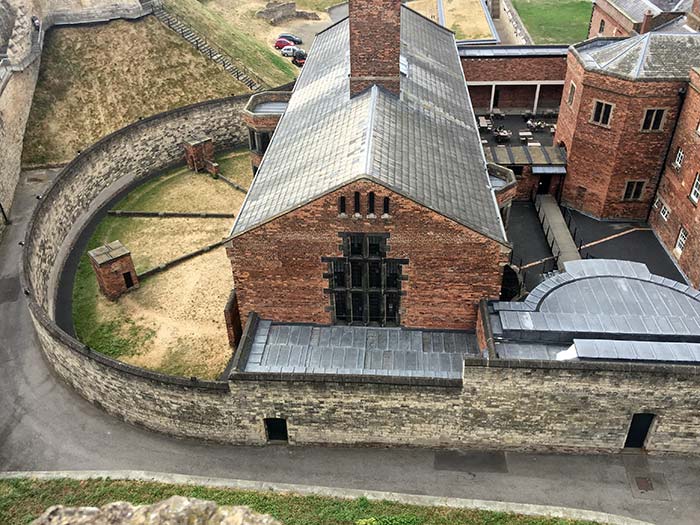 …yeah. Apparently, from what our tour guide said, he had sevral illegitimate children with several different female prisoners.

There is one other bit I don’t have photos of, because photos aren’t allowed in the super special room where it’s kept: the Magna Carta.

Yes, the Magna Carta, one of the original handwritten copies. It’s here, in a climate controlled room with the text of the thing up on the wall.

And there, right at eye level smack dab in the middle of this enormous wall of text, is Clause 54:

No one shall be arrested or imprisoned on the appeal of a woman for the death of any person except her husband.

Even back then, women’s voices were never taken seriously.