I was out on the porch enjoying the lovely Portland weather this morning when the postman came by with the advance review copies of my new novel, Black Iron,, straight from the publisher. 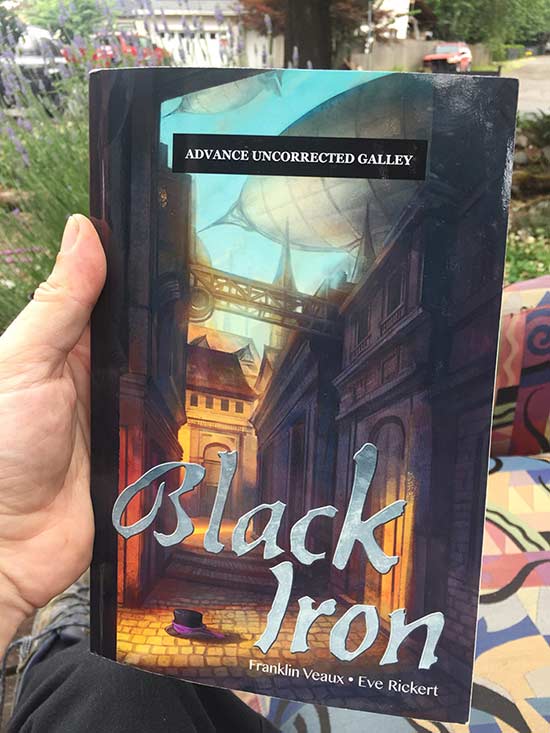 No, it’s not about polyamory. Not at all.

So what’s it about? Well, that’s kinda hard to say. It’s a bit steampunk, if you interpret “steampunk” very loosely. It’s about a heist, kind of. Well, it’s really a murder mystery, sort of. No, wait, that’s not quite it. It’s a story of political intrigue, in a manner of speaking.

Think Terry Pratchett’s Discworld books or Douglas Adams’ The Hitchhiker’s Guide to the Galaxy, only set in an alternate 19th-century London where there’s no British empire and the British don’t drink tea. (Joreth read the first draft and described it this way: “Imagine if Terry Pratchett and Neil Gaiman had a love child who grew up on a steady diet of George RR Martin.”)

It’s the same kind of loopy, over-the-top humor that you see in books like Night Watch or Hitchhiker’s Guide, the sort of absurdist comedy that’s really social commentary.

There’s a petty thief and a princess, of course, because if you have a 19th-century heist political intrigue steampunk murder mystery, you have to have a petty thief and a princess—it’s required by law. There are undead things, after a fashion. There’s a cameo by Doctor Frankenstein; in this world, his experiments worked, but not quiiiiiiiite the way he expected them to.

There are airships. The New World colonies are still colonies. Oh, and people die, because we now live in a world where Game of Thrones is a thing, so gone are the assumptions that sympathetic characters are immune to being killed.

Oh, and if you know anyone who would like an advance review copy, let me know!