We didn’t plan to see The Great Wall. We actually intended to see Get Out, but owing to an unfortunate accident with a parallax time distortion unit and a group of Brazilian terrorists, we ended up in the theater a week early. The only movie that had not yet started playing was The Great Wall, starring a bunch of CG space aliens, Willem Dafoe as John Hurt doing an impression of Keanu Reeves, Matt Damon as Matt Damon, and Tian Jing as an archer-specialized player character from Skyrim. 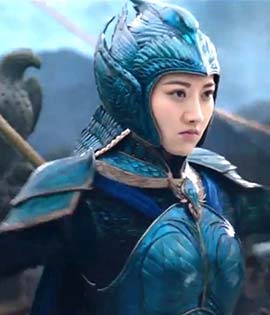 Seriously, tell me this isn’t glass armor from Skyrim.

So, with some trepidation, we ventured into the theater, expectations and parallax time distortion unit appropriately recalibrated.

MATT DAMON: The Chinese have the secret of black powder. We do not. Let us venture to China and steal black powder from the Chinese.
MATT DAMON’S SIDEKICK: Wait, what? If they have black powder and we don’t, doesn’t that mean they have better weapons than we do, thus making stealing from their military kind of a bad idea?
MATT DAMON: That’s why we brought expendable extras with us. Plus, I have a magnet.
MATT DAMON’S SIDEKICK: Why do you have a magnet?
MATT DAMON: Because unlike you, I read the script.
EXPENDABLE EXTRAS: Hang on, back up a second. What was that part about expendable–

CG SPACE ALIENS come out of NOWHERE and kill the EXPENDABLE EXTRAS.

MATT DAMON: Let’s take that arm with us.
MATT DAMON’S SIDEKICK: Wait, what? Why?
MATT DAMON: Because it’s a CG space alien’s arm, of course! 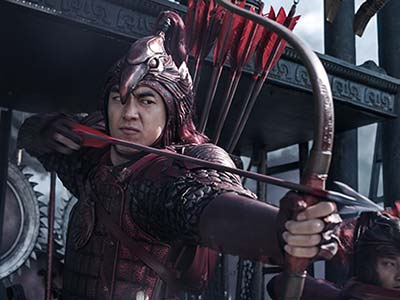 They are taken before the HIGH COMMANDER and INTERROGATED. WILLEM DAFOE quietly LURKS in the BACKGROUND.

MATT DAMON: Look! We have a space alien arm!
HIGH COMMANDER: Your space alien arm impresses us, Matt Damon. I will put you in a prison cell.
RANDOM SOLDIER DUDE: I can’t find the key to the cell.
HIGH COMMANDER’S UNDERLING: Put the prisoners on top of the wall instead, because that totally makes sense.

SPACE ALIENS attack the WALL. ARCHERS FROM SKYRIM jump off the WALL on BUNGEE CORDS to SHOOT and STAB the SPACE ALIENS because that makes TOTAL SENSE and it is TOTALLY how you defend a WALL from attackers who have NO PROJECTILE WEAPONS. WILLEM DAFOE quietly MUNCHES SCENERY in the BACKGROUND.

MATT DAMON: Space aliens are attacking the wall! Matt Damon’s sidekick, grab a red cloak and go all bullfighter on them while I shoot them with trick shots using my bow!
LEGOLAS: Eh, I’ve seen better.
ALIEN QUEEN: Oh shit, there are white people up on top of the wall! Retreat! Retreat!

They have a VICTORY CELEBRATION. The CHINESE MILITARY taunts MATT DAMON for his BOW.

MATT DAMON: Watch as I do some complicated trick shots with my bow.

MATT DAMON does some COMPLICATED TRICK SHOTS with his BOW and manages not to PUT HIS EYE OUT or ANYTHING.

HIGH COMMANDER: You have a magnet. That is how you killed the space alien at the beginning of this movie.
MATT DAMON: How do you know?
HIGH COMMANDER: The legends speak of a time when the Emperor was cruel and wicked, so the space aliens came to punish him. Now, every sixty years, the space aliens come out of hiding in the mountains and roam the earth for food.
MATT DAMON: Wait, what? A large number of organized, highly aggressive, large predators only come out once every sixty years? How does that ecosystem make any sense at all?
HIGH COMMANDER: It worked for Pitch Black, didn’t it?
VIN DIESEL: Hey, leave me out of this. My movie rocked.

HIGH COMMANDER: Quickly! We must kill the space alien!

A SECOND SPACE ALIEN comes up BEHIND THEM and ATTACKS

PLAYER CHARACTER FROM SKYRIM: Now I am in charge!
MATT DAMON: Great. We should capture a space alien.
PLAYER CHARACTER FROM SKYRIM: Did you not just hear me? I said I am in charge!
MATT DAMON: Yeah, yeah, whatever. Okay, so what we’ll do is we’ll make some alien tranquilizer–
PLAYER CHARACTER FROM SKYRIM: I am in charge. Also, how on earth would we know anything about alien physiology or biochemistry? What makes you think a tranquilizer–
MATT DAMON: Yeah, yeah, yeah. Then we’ll put the alien tranquilizer on harpoons, see. And we stab the harpoons into the aliens and use the magnet to keep them from fighting back! And then we put them in a cage!
PLAYER CHARACTER FROM SKYRIM: We have never before thought of using harpoons, capturing aliens, or using magnets. Fortunately, we happen to have a whole bunch of harpoons and alien tranquilizer just lying around, even though this idea is completely new to us and we’ve never even considered it before. And look, there’s an alien-sized cage just lying here! Also, even though we learned that magnets incapacitate aliens hundreds of years ago, we have never considered using magnets in any of our fortifications or defenses because of reasons. It’s a good thing you came by to save us, Matt Damon! Also, I’m being so sincere right now. No, really, I am. Sarcasm is not known to my people.

A FOG rolls in. The aliens ATTACK. MATT DAMON jumps off the WALL on a BUNGEE CORD to fight tranquilized aliens HAND TO HAND instead of just waiting for the TRANQUILIZER to work

MATT DAMON: I have captured a space alien!

MATT DAMON: Wait, what? You have a door at the bottom of the wall? Then how come I jumped off the top of the wall on a bungee cord like a dumbass?
PLAYER CHARACTER FROM SKYRIM: You didn’t ask. I do not think you came here to save us. I think you came hear to steal our black powder.
MATT DAMON: …
PLAYER CHARACTER FROM SKYRIM: I can’t tell who’s worse, us or the space aliens. At least you don’t see them screwing each other for a percentage of the profit.
RIPLEY: That’s my line.
BURKE: Go for the black powder! Do it! Do it!

PLAYER CHARACTER FROM SKYRIM: The space aliens have dug a tunnel through the wall! Now they will destroy the world, just like the creatures in Pitch Black, which was a much better movie!
MATT DAMON: You guys really don’t understand static defenses, do you?

PLAYER CHARACTER FROM SKYRIM: Matt Damon, your friends have stolen the black powder and run away.I will put you in a cell, since we have finally found the key. Also, we will now get onto hot air balloons which have failed all of our tests and fly to the capital, where we have shipped the captured space alien in a cage. Let us be off.

WILLEM DAFOE: Go walk up that hill and see where we are. I promise not to steal your horse and all your supplies and ride off into the desert, leaving you stranded.
MATT DMON’S SIDEKICK: Okay.

WILLEM DAFOE steals the HORSE and ALL THE SUPPLIES and rides off into the DESERT, leaving MATT DAMON’S SIDEKICK STRANDED

MATT DAMON’S SIDEKICK: You promised!
WILLEM DAFOE: Ha! I had my fingers crossed!

WILLEM DAFOE, the RAIDERS, and EVERYONE WITHIN A MILE are blown SKY-HIGH by the BLACK POWDER

MATT DAMON: I will get on a balloon and ride it to the capital city and kill the queen space alien.
CHINESE NERD: Aren’t you afraid the balloon will blow up and send you plummeting to your gruesome death?
MATT DAMON: I am not a non-player character.
CHINESE NERD: I’m riding with you.

They FLY to the CAPITAL CITY. The SPACE ALIENS are RAMPAGING

CHINESE NERD: We can cover the captured space alien with bombs and let it go! When it goes to the queen it will blow her up!
MATT DAMON: See, that’s what I’m talking about. This is why nerds rule the world.

They cover the CAPTURED SPACE ALIEN with BOMBS and let it GO. It heads straight to the QUEEN

MATT DAMON: Okay, I will go up this tower and make a daring trick arrow shot that will save the world.

MATT DAMON makes a DARING TRICK ARROW SHOT that MISSES. The world is not SAVED

LEGOLAS: Loser!
PLAYER CHARACTER FROM SKYRIM: Okay, I will go up this tower and make a daring trick arrow shot that will save the world.

The PLAYER CHARACTER FROM SKYRIM makes a DARING TRICK ARROW SHOT that BLOWS UP THE QUEEN. The world is SAVED

LEGOLAS: Eh, I’ve seen better.
PLAYER CHARACTER FROM SKYRIM: Matt Damon, we have captured your sidekick wandering alone in the desert without a horse or supplies. You can take him with you or you can take black powder with you. Your choice.
MATT DAMON: I choose Matt Damon’s Sidekick.
MATT DAMON’S SIDEKICK: It’s like I don’t even know you any more!
PADME: That’s my line! It’s pretty awful, though. You can have it if you want.