It’s a comment I see scattered far and wide across the Internetverse. In almost any conversation where some guy is complaining about his wife or girlfriend having male friends, inevitably someone else will ask, “don’t you trust her?” And inevitably, as sure as night follows day, he will say “Oh, I trust her, I just don’t trust other guys.”

Which, as near as I can tell, translates into English as “I don’t trust my girlfriend.” Because the only alternative reading I can see is far more horrifying. 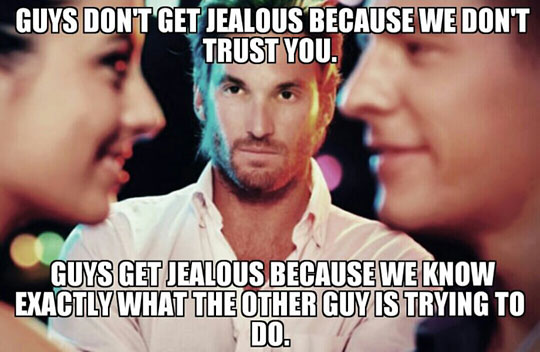 First things first. Let’s call this what it is: an endorsement of the belief that what women want doesn’t matter.

There are a couple of ways to read this, one of them pretty messed up, the other one even more so.

The first, messed-up reading: My girlfriend wants to be with me and be faithful to me, but other guys don’t want her to be. Other guys will trick, persuade, cajole, or convince her to cheat on me. You know, because they’re guys and she’s a woman. Women are weak of will, incapable of holding out when faced with a determined guy who wants to seduce her.

The second, even more messed-up reading: My girlfriend wants to be with me and be faithful to me, but other guys don’t want her to be. They’ll just rape her. Because, you know, they’re guys, and that’s what guys do.

Regardless of the reading, the conclusion remains the same: Ergo, the thing I must do is prevent my woman from hanging out with other guys. Charmers or rapists, it doesn’t make any difference if she wants to be faithful to me; they want her, so they’re going to fuck her.

And that’s a whole world of messed up right there, it is.

Disempowering and infantilizing on the one hand, or implicitly supportive of rape culture on the other—there’s no interpretation that makes this idea smell any less bad.

So, I would like to have a word with all you men out there who have ever used this reasoning, thought about using this reasoning, or nodded in sympathetic agreement when someone else has this reasoning. I will try to put this as delicately as possible:

Cut it out. It’s bullshit.

Look, I get it. It’s scary to trust someone else. When you do, you’re putting your heart in their hands and giving them a chance to let it shatter on the floor. You’re hoping they won’t drop it, knowing it will hurt if they do. I totally understand how scary that is.

But you can’t have it both ways.

If you trust your partner not to betray you, you have to have confidence that she won’t even if she has the opportunity to. And if you try to control her to prevent her from having the opportunity to hurt you, you don’t trust her.

This is not about other guys or what they want. It’s about her.

If you don’t think she can say “no” to a silver-tongued bloke with a huge, massive, throbbing bank account, you don’t trust her. If you trust her, it doesn’t matter what other men’s intentions are.

And if you assume as a given that other men who take an interest in your girlfriend will ignore her ‘no’ and just rape her, there’s a bigger problem than her fidelity. Perhaps it’s time to stand up, you know? And I don’t mean stand up to control your girlfriend. I mean stand up against the notion that it is in any way, shape, or form acceptable to assume that other men will not listen to her ‘no’ and there’s anything normal about that…because there isn’t.

Is that really what you believe?

My hunch is that it’s not. My hunch is what you’re really saying is you think your girlfriend will choose to cheat, but you don’t want to say it because you understand what it might mean. You don’t trust her, and a healthy relationship can’t function without trust.

You aren’t fooling anyone.

2 thoughts on ““I trust my girlfriend. I just don’t trust other guys.””