It’s much too early in the morning. You stumble blearily out of bed and put on the hot water for a nice cup of tea, or perhaps flip on the percolator to brew some coffee. Unfortunately, your morning beverage is laced with a poisonous chemical that keeps the crop from being eaten by insects–an insecticide that is toxic not only to bugs, but to humans too.

You go out to lunch. The server recommends the rainbow salad, which unknown to you, also contains a number of insect-killing chemicals. Your workmate from across the hall–you know, the one who always plays the stereo too loud and makes that weird snorting sound when he laughs–skips the salad in favor of a nice, healthy ginger tofu with peanut sauce. Sounds healthy? It, too, contains pesticide chemicals, even though there’s a little “organic” sticker on the menu right next to it.

Sound scary? We’ll come back to that in a bit.

One of the objections that people have about GM food is the idea that it’s intrinsically less healthy than normal or organic food. Fears about health and food safety are sometimes hysterical, as when Zambian president Levy Patrick Mwanawasa banned all GM food imports and destroyed donated food over GM fears in 2002, even though his country was facing a famine and millions were at risk of starvation, and sometimes more muted, as when people try to link GM food to cancer.

Food safety is absolutely a legitimate and valid concern. Imagine, for instance, what people might reasonably say if a strain of genetically modified zucchini were linked to widespread cases of illness. In our hypothetical example, if it were shown that something intrinsic to the zucchini–not an insecticide or herbicide the zucchini had been modified to resist, but a compound actually produced by this strain of zucchini itself–sickened people, we might expect that folks would voice some concerns about the safety of genetic modification.

And that would be a perfectly reasonable thing to do.

This hypothetical case isn’t actually hypothetical. In 2003, a number of people in New Zealand were hospitalized by an outbreak of food poisoning linked to zucchini. Environmentalists jumped on the story, quick to point out the dangers of untested genetic engineering of food.

Problem was, it turned out the zucchini in question wasn’t genetically modified. In fact, it was organic–a fact that quickly caused the environmental groups to fall silent.

Plants are complex factories that produce staggering numbers of chemicals. Because plants can’t run away from hungry insects, they have evolved a formidable arsenal of chemical weapons designed to kill insects that try to feed on them.

In 2003, New Zealand experienced a severe aphid infestation. Conventional farmers who controlled the bugs with synthetic pesticides grew crops that were unaffected by the infestation. Organic growers, however, didn’t deal effectively with the aphids. The organic zucchini that survived the infestation produced large quantities of cucurbitacin, a toxic chemical zucchinis and other plants (like pumpkins and gourds) use to defend themselves from pests. The organic zucchini with elevated levels of cucurbitacin contained so much of the chemical it was toxic to humans as well, hospitalizing people who ate it.

Something similar happened in the 1960s. Farmers using conventional breeding techniques bred the Lenape potato, cultivated to fry without burning and make perfect potato chips. Unfortunately, potatoes belong to the same family as deadly nightshade, and like nightshade, they are toxic. Potatoes produce a glycoalkaloid poison called solanine, which is extremely toxic to humans–quantities as small as 3 mg per kg of body weight can be fatal. (That’s crazy poisonous, by the way.)

All potatoes produce this toxin. The potato root contains solanine, but not usually enough of it to cause health problems–it’s the dose that makes the poison, after all. But the Lenape potato had elevated levels of solanine–enough to sicken people who ate it.

And it wasn’t GMO. It was an ordinary hybrid bred through conventional agriculture.

So, back to the beginning of this post. When you drink tea or coffee, you are consuming a toxic chemical that belongs to a class of chemicals called cyclic alkaloids. This toxin, evolved as a defense against marauding insects, is a neurotoxin called 1,3,7-Trimethylxanthine, or more commonly, “caffeine.”

And your lunch? The peppers in it contain capsaicin, a toxin that gives peppers their characteristic burning (and are also linked to cancer in animal studies). Such compounds exist all over nature–the wonderful aromatic smell of ginger, the sulfur compounds that flavor onions and leeks (and also make your eyes burn when you chop them)–all toxic chemicals that exist for their pesticide properties.

People who object to GMOs on food safety grounds tend to ignore the fact that any food potentially carries risks. Proponents of GMOs do not claim that GM food is always absolutely safe under all conditions; such a claim would be very silly indeed. GM food simply isn’t inherently any more dangerous than organic or conventional agriculture, that’s all. (In fact, if you judge strictly by cases of food recalls and documented foodborne illnesses, organic food is arguably the most dangerous of all broad classifications of food; it’s disproportionately represented in FDA food recalls for potentially health-threatening contamination, for example.) 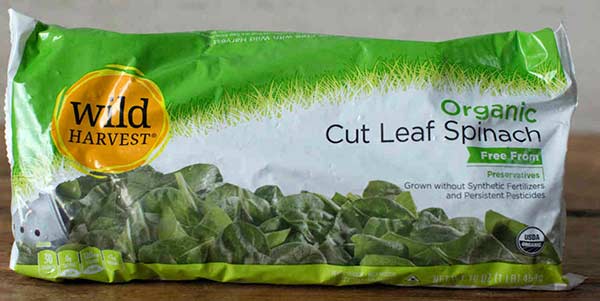 One of the many organic foods recalled in the last 60 days because of potentially life-threatening contamination.

What makes GM food so much more frightening than other food, even when we know other types of food are more prone to dangerous contamination?

A lot of it is the same kind of fear that makes flying seem more scary than driving, even though the reality is exactly the opposite. We feel more familiar with driving. We feel more in control. Few people understand basic biology; fewer still understand agricultural science. Scientists overwhelmingly believe GM food is safe; laypeople don’t. Indeed, ignorance of basic science is so common in the US that many people don’t know what DNA is, and at least one poll has suggested that there are large numbers of folks who think that genes are only found in genetically modified food!

That ignorance leads to a common cognitive error called the appeal to nature–the notion that genetically modified food is “unnatural” and therefore intrinsically worse than organic or conventional food, which is more “natural.”

This cognitive error is inevitably on parade in almost any argument against GM food:

Not all objections are quite that uninformed, of course. Of the arguments that don’t boil down to “unnatural=bad, natural=good,” many of the health concerns about GMOs center around two things:

A great deal of noisy press has been generated by the WHO’s classification of glyphosate as “possibly carcinogenic.” This classification is based on a study that shows that people who handle large amounts of glyphosate, a key ingredient in Roundup, might be at greater risk of a form of cancer called non-Hodgkin lymphoma. Strangely, the same study showed such people to be at lower risk of many other forms of cancer. Here’s the experimental data: 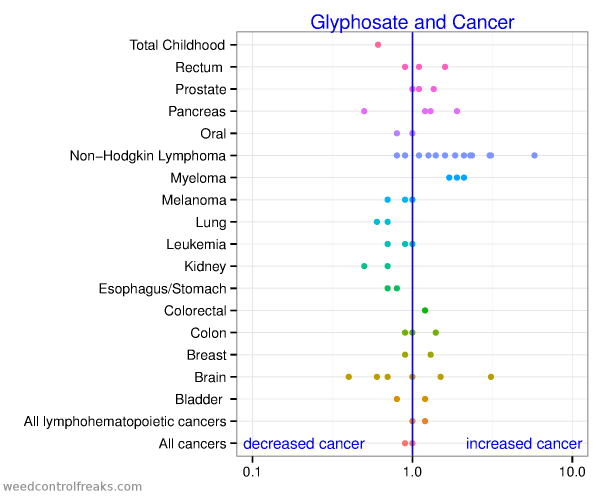 So what should we make of this? That Roundup causes some cancer and cures other cancer?

It’s not that simple. there’s a good writeup over here, but the TL;DR version is: The data make no attempt to control for confounding factors. These are “case control” studies (studies that compare people who have cancer with people who don’t, and look for differences between the groups) rather than “cohort” studies (studies that track people for long periods of time, note and isolate potential risk factors, and then observe the relative incidence of cancer).

One pesticide used by organic farmers is rotenone. It’s strongly linked to Parkinson’s disease, and its use is banned in California. It should be noted that the same WHO body that classified glyphosate as a possible carcinogen also classifies rotenone as a moderate toxin–a more severe classification than glyphosate. In 2006, the FDA revoked approval for use of rotenone on food. In 2007, under lobbying pressure from organic growers, the FDA allowed use of rotenone as a pesticide in food production. Rotenone and other “natural” pesticides are often found in high concentrations in organic foods, especially organic olives and olive oil.

There’s something really interesting going on here. If the FDA had revoked permission to use a synthetic herbicide like glyphosate, then reversed direction under lobbying from Monsanto a year later, it’s quite likely that anti-GMO activists would be quite upset and vocal about it. Strangely, they’re silent about it when it’s an “organic” pesticide, even though it’s linked to human health hazards and residues are found in organic foods.

This is similar to the lack of reaction when organic zucchini were found to be hospitalizing people, even while environmentalists made quite a lot of noise when they wrongly believed the zucchini in question was genetically modified.

To my mind, this demonstrates conclusively that it’s not evidence of harm that’s the motivating factor in resistance to GMOs. Opponents aren’t motivated by analysis of evidence; they ignore things that apply to conventional or organic agriculture that they use as arguments to oppose GMOs. So the arguments themselves are validations, but aren’t the real reason for the opposition.

The other argument often used against GMOs is the allergy argument. GMOs are genetically modified to express proteins that aren’t found in the unmodified plant, the reasoning goes. Novel proteins in plants can potentially be allergens. Therefore, GMOs might provoke dangerous allergic responses.

It’s a legitimate concern, and contrary to common isperception, GM food is rigorously screened for potential allergens and development is discontinued if a new allergen is discovered. While any food can potentially cause an allergic response, novel allergens are taken very seriously by agricultural researchers.

Some GMOs contain nothing new, either from another species or from anywhere else. The Arctic apple, for instance, is an example of a GMO made by turning off an existing gene, rather than adding a new gene.

Arctic apples are a breed of apples that don’t turn brown when they’re cut. There’s a natural breed of grapes called Sultana grapes, which are used to make golden raisins. These grapes don’t oxidize on exposure to air. Researchers noticed they had a natural mutation that silenced a gene–one of the same genes that Apples have. So, they reasoned, switching off that same gene in an apple might cause the apple not to turn brown. And they were correct.

The tearless onion is another example of a gene-silenced modification. Onions naturally produce various sulfur compounds to poison insects. One of these creates sulphuric acid–battery acid–on contact with water. When you cut an onion, this chemical is released into the air; when it comes in contact with your eyes or nose, it produces acid, which results in the pain and tears you feel. No-tear onions have the gene that produces this chemical turned off. It’s difficult to understand the objection to this kind of genetic modification. There’s no rational mechanism for harm caused by turning a gene off.

The fact is, we’ve now been eating GM food for a very long time, with no evidence whatsoever of harm. Proposed mechanisms of harm that aren’t based on the appeal to nature are similar, and in some cases greater, than organic and conventional agriculture, yet GMOs are singled out for special fear. That fear is difficult to overcome, because you can’t reason someone out of a position they did not reason themselves into.