A lot of the world’s social, economic, and resource problems are, when you come down to it, power problems. I don’t mean political power; I mean energy. Electricity.

If we had unlimited quantities of cheap, clean energy, water would stop being a problem overnight. It’s easy to desalinate seawater…easy, but not cheap. The process requires enormous inputs of energy, and energy is expensive.

The holy grail of energy is, and has always been, fusion power. Fusion power offers vast quantities of energy from seawater…if we can make it work. And we’ve been chasing it for a while, though never with any serious determination; the world’s annual budget for fusion research is about 1/18th the annual revenue of the National Football League. (In the US, the annual budget for fusion research is less than what the Government Accountability Office spends on paperwork.) Fusion power promises one-stop shopping for reversing global carbon emissions, improving access to fresh water all over the world, raising the standard of living for developing nations, moving toward non-polluting transportation…

…if we can make it work.

It’s been a long road. A lot of engineers thought we’d have the problem licked by the mid-1960s. Here we are in 2014, and it’s only been in the last two years that teams at MIT and Lawrence Livermore have actually made fusion reactors that produce net positive energy…for short periods of time. It’s a very, very difficult nut to crack. 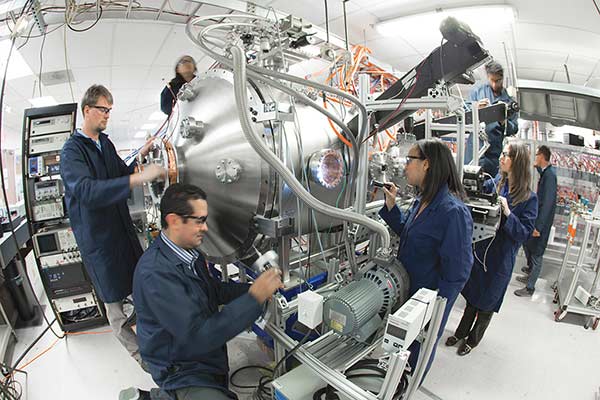 Lockheed Martin recently announced that their Skunkworks team has been quietly, and secretly, working on fusion power for a while. And they claim to be within 5 years of an operating prototype of a compact fusion reactor.

Now, I am of two minds about this.

– It’s the fucking Lockheed Martin fucking Skunkworks. These are not a bunch of cranks, kooks, or pie-in-the-sky dreamers. These guys built the SR-71 in the early 1960s, and the F-117 Stealth fighter back when the Radio Shack TRS-80 was the state of the art for personal computers.
– Lockheed doesn’t seem the kind of company to stake their reputation on a claim unless they’re really, really sure.
– They’re exploring deuterium-tritium fusion, which is a lot easier than ordinary hydrogen-hydrogen fusion of the sort that happens in the sun.
– Did I mention it’s the fucking Lockheed Martin fucking Skunkworks? They have money, engineering expertise, and problem-solving experience by the metric ton. They are accustomed to solving hard engineering problems 20 years before anyone else in the world even knows they can be solved.

– Fusion is hard. The pursuit of fusion has left a lot of broken dreams in its wake.
– The design they propose encloses a set of superconducting magnets inside the fusion chamber. That’s clever, and solves a lot of problems with magnetic containment, but superconducting magnets are fragile things and the inside of a fusion chamber is as close as we can get to hell on earth.
– Fusion creates fast neutrons. Those fast neutrons tend to run into stuff and knock it all out of whack. Solving the problem of the reactor vessel degrading under intense neutron flux is non-trivial; in fact, that’s one of the key objectives of the multibillion-dollar International Thermonuclear Experimental Reactor being built by a consortium of countries in France.

Fusion power, if we can make it work, would likely (and without hyperbole) be one of the most significant achievements of the human race. It could and very likely would have farther-reaching impacts than the development of agriculture or the invention of iron, and would improve the standard of living for billions of people to a greater extent than any other single invention.

For that reason alone, I think it’s worth pursuing. I’d like to see it better funded…say, maybe even on the same scale as the NFL. I’m not sure of Lockheed can deliver what they’re promising, but I am very, very happy they’re in the race.