I am a man who wears bunny ears.

As I write this, Eve and I are on the last leg of our book tour–six events over the next four days and we are finally done. Part of the tour took us through Las Vegas. And Vegas…Vegas is not what I expected.

Close your eyes. Imagine Las Vegas, that epicenter of sin and decadence in the desert. What do you picture? Giant neons. Slot machines. Organized crime. Women in huge feather headdresses. Not, you might think, the sort of place where a man in bunny ears would exactly stand out…

…and you’d be wrong.

But let me backtrack for a moment.

As Eve and I have traveled the country talking about polyamory and ethics and such, we’ve brought a stuffed shark with us. The shark, who joined our team2 in Atlanta, has made appearances all over North America, solely for the purpose of being exploited.

It started as a lark, you see. There is a friend of Eve’s, and this friend is a marine biologist who studies sharks. He also writes angry blog entries in response to phony stories on the Discovery Channel, stories with lurid titles about how mermaids might be real (spoiler: they aren’t) and speculating whether Megalodon, the enormous prehistoric dinosaur-shark, might still be alive (hint: it isn’t).

There are trolls on the Internet, and some of these trolls want to believe in mermaids and Megalodon. So they follow Eve’s friend about online, posting pictures of him and diatribes about him with the Twitter hashtag “#nerdsexploitingsharks”.

Which is, thought we, absolutely begging for hijacking.

So, half an hour before I was scheduled to do a lecture in Atlanta, I darted out in frantic search of a stuffed shark to exploit. I found one at the Atlanta Aquarium, and it’s been accompanying us ever since, being photographed in exploitative situations and posted to social media under #nerdsexploitingsharks.

So. Back to Las Vegas.

Now, there are many ways to carry a stuffed shark. If you ever find yourself in Las Vegas wearing bunny ears and carrying a stuffed shark, you might try one or more of these carry techniques. I present this information in the name of Science!3 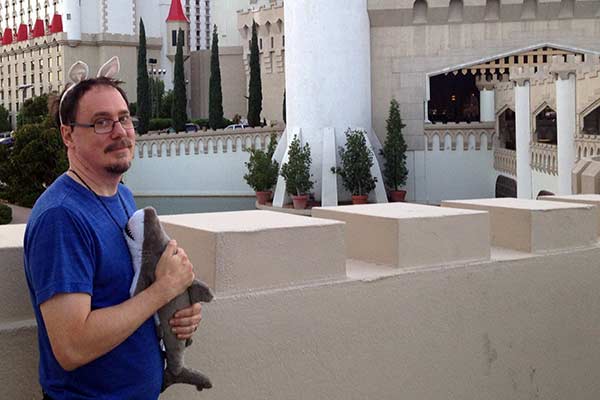 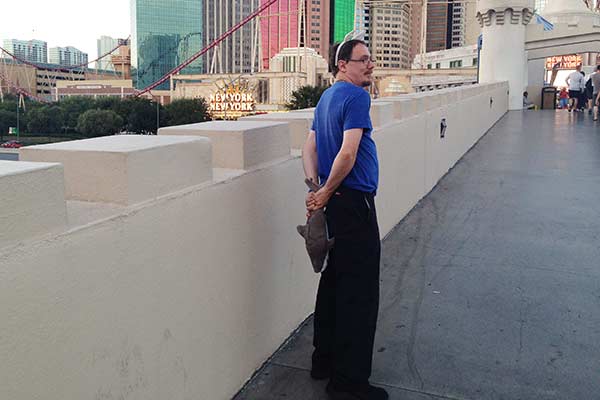 The ‘Shark? What shark?’ 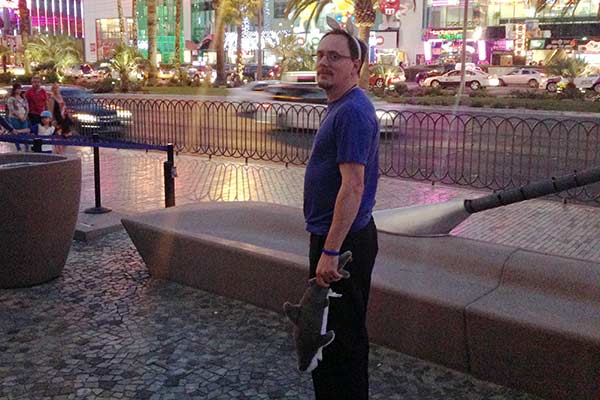 This technique challenges the observer: “Yeah, I’m carrying a stuffed shark, and how do you like THEM apples?” Advantages: People might assume you’re a famous performer, or, failing that, an eccentric Mob hitman with a pistol inside the shark like that one scene in Hudson Hawk, only with a shark instead of a teddy bear. Disadvantages: People might assume you’re barking mad.

Yeah, I have bunny ears. And a shark. Which might or might not contain a concealed pistol. Don’t fuck with me. Advantages: People give you a wide berth on the sidewalk. Disadvantages: You might get shot. 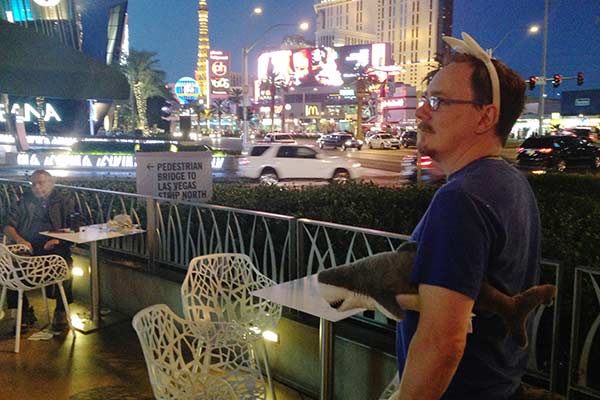 Similar to the Security Blanket, but less neurotic, the Binky tells the world that, yes, the world is cold and cruel, and yes, your shark helps you navigate the rivers of cruelty all around you, but you don’t really need the shark. You just like the shark, okay? Advantages: More relaxed and casual than the Security Blanket; this attitude tells the world you really can stand on your own two feet. You know, if you want to. Disadvantages: Small children point at you. 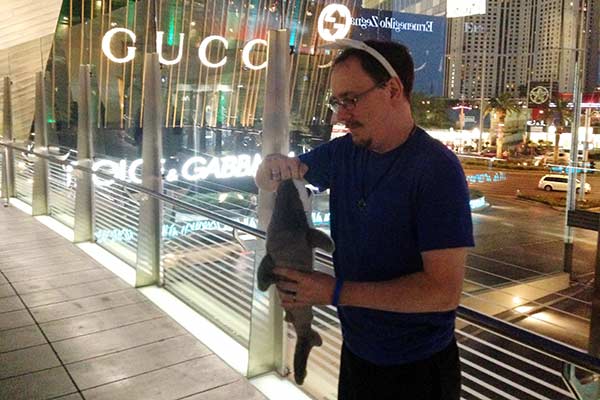 “I love you, man!” This attitude tells the world you and your shark have a special friendship…but, like, totally in a heterosexual way. Advantages: It’s totally, like, a heterosexual thing. Not, like, that other thing. Disadvantages: You may be mistaken for a dudebro. Who wears bunny ears. And carries a stuffed shark. 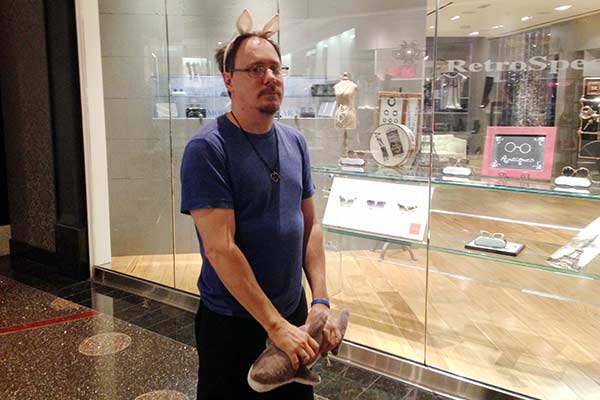 “I’m just carrying a stuffed shark from one place to another place. Nothing to see here. Move along.” Advantages: Very workmanlike. People won’t get the impression that you’re, y’know, attached to the shark or anything. Disadvantages: It’s still pretty weird to see a guy in bunny ears carrying a stuffed shark, no matter how workmanlike he may be. Plus you don’t have a hand free to drink alcohol, play slots, and convince yourself that this thing you’re having is fun. 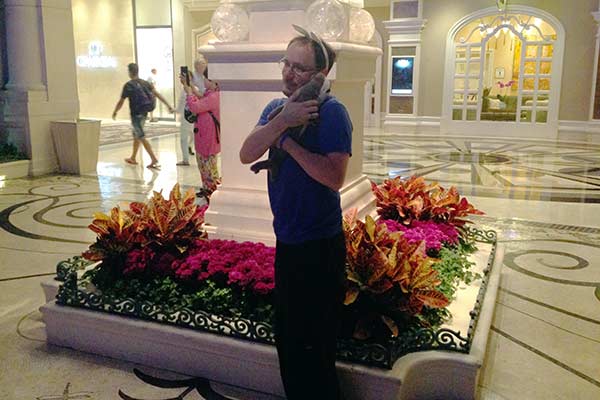 The Secure in my Masculinity

This pose shows the world that you’re absolutely certain of your manhood and you’re not too threatened to express your true feelings, even if you happen to be in the middle of one of the world’s largest casinos. Advantages: People will stay far, far away from you. Disadvantages: Unless they’re security.

1 Insofar as Las Vegas can be said to have a “culture.” My observations of Las Vegas culture suggests it is made up primarily of people who have no idea how to have fun desperately trying to have fun and convincing themselves the thing they are having is, indeed, fun. And alcohol.

2 Was purchased and exploited.

3 I am frequently asked “are you a scientist?” I usually say “no.” I think I am probably going to have to start saying “yes,” so when people ask “what kind of scientist? Chemist? Biologist?” I can say “Mad.”

8 thoughts on “Sharks and Loathing in Las Vegas”