Having made his directorial mark with dark, thoughtful movies like Pan’s Labyrinth and sprawling, epic movies like The Hobbit, Guillermo del Toro has turned his sights onto exploring new territory. And with Pacific Rim, his ambition is plain: he seeks nothing less than to make The Silliest Movie Ever Filmed.

In this movie, we see a mysterious underwater crevasse, glowing a hellish red and surrounded by special effects, unleash a gigantic alien. And I don’t mean T. Rex gigantic, oh, no. Or even King Kong gigantic. This is a gigantic alien. The size of the bigness of it would make Godzilla say “wow, that’s a gigantic alien!” 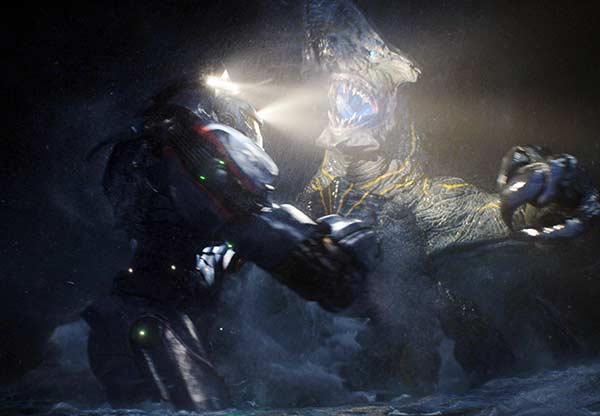 The gigantic alien wades ashore and stomps around San Francisco for a while. It smashes the Golden Gate Bridge, sending cars flying everywhere. It stomps along down Folsom Street, sending more cars flying. The army is mobilized. Tanks get stepped on. F-35 Lightning fighters shoot at it with machine guns, which is odd considering their more typical armament includes Brimstone armor-piercing antitank missiles, which one might think (were one of a clear frame of mind and not screaming “OMG it’s a gigantic alien!”) would be a more effective weapon against gigantic aliens. More cars go flying. The monster is defeated. Another monster appears. More fighter aircraft shoot at it with ineffective weapons–a common theme in this movie, as we shall see–and eventually, a plan is made to fight the monsters using gigantic hundred-foot-tall robots shaped like people, because the basic human body plan is so effective at underwater hand-to-hand combat. Pilots are placed in the giant robots and move them around by thrashing and stomping, because it takes about 750 milliseconds for a person to move a limb, and it was felt that simply controlling the giant robots by thought alone rather than by motion might make the giant robots too fast and too responsive, depriving the alien monsters of a fair chance. Having one pilot per robot overloaded the pilot’s brain because of plot, so the solution was to put two pilots into each robot, thereby adding to the response time and generally making the giant robots that much less efficient.

And that’s before the opening credits roll.

The rest of the movie goes something like this:

Seven YEARS pass since the first GIGANTIC ALIEN ATTACK. Two BROTHERS, named PROTAGONIST and EXPENDABLE, are sleeping in a BED when an ALARM SOUNDS.

Protagonist: It’s time to get into a giant robot and beat up gigantic aliens!
Expendable: Woohoo! It’s the beginning of the movie and my name is “Expendable.” What could go wrong? Let’s do this!

They hop into the HEAD of a GIANT ROBOT, which for unexplained reasons is DETACHABLE. They meld MINDS and are carried by a fleet of HELICOPTERS into the ocean.

Helicopter Pilot: Man, it sure is a good thing the laws of physics in this world don’t include turbulence, or else it would be impossible for a whole bunch of helicopters all tethered together to carry a giant robot.
GLaDOS: Welcome to the Aperture Science Giant Alien-Fighting Robot. The safety and comfort of our robot pilots is something we’re aware of. Cake and grief counseling will be available at the end of this scene.

Protagonist: Look! The gigantic alien is menacing a fishing boat! We should rescue it!
Expendable: What could go wrong? Let’s do this!

PROTAGONIST and EXPENDABLE punch the GIGANTIC ALIEN a whole bunch of times, then SHOOT it with an ION CANNON. The gigantic alien DIES

Expendable: The ion cannon seems to be pretty effective against the gigantic alien. Why didn’t we just shoot it from the start, instead of punching it a whole bunch of times first?

GLaDOS: Congratulations. Despite your violent tendencies, the only thing you’ve managed to break so far is my arm.

Expendable: I didn’t see that coming!

Protagonist: I didn’t see that coming! 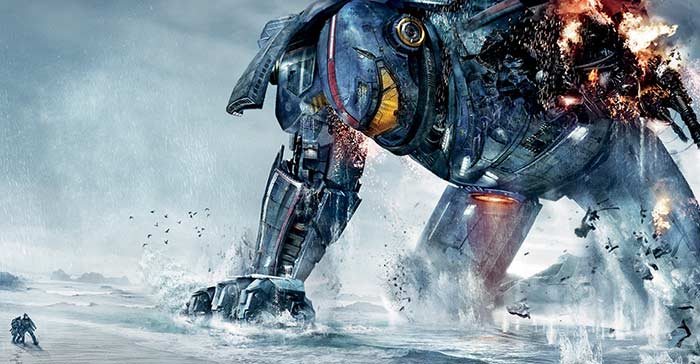 Mako Mori: Hi, Protagonist! I’ve studied your past as a giant robot dude. I’m almost the only woman in this movie, so you know I will be important. Did you know I’ve always wanted to be a giant robot pilot?
Whacked-Out Biologist: Hi, Protagonist! I’m a whacked-out biologist. I’m the representation of everything Hollywood believes a scientist is. You know what gets me off? Body parts! From gigantic alien monsters! Whee!
Socially Awkward Mathematician: Hi, Protagonist! I’m a socially awkward mathematician. I’m the representation of everything Hollywood believes mathematicians are. You know what gets me off? Bickering with the Whacked-Out Biologist! Since this is Hollywood, that must mean we will be BFFs by the end of the movie.
Protagonist: I came back for this?

The SOCIALLY AWKWARD MATHEMATICIAN talks about the number of attacks INCREASING. The WHACKED-OUT BIOLOGIST talks about MELDING with a gigantic alien BRAIN and repeats the MYTH about dinosaurs having TWO BRAINS. The dialog WEDGES. Biologists in the audience CRINGE.

PROTAGONIST hits a bunch of people with STICKS to see who would make the best CO-PILOT. Mako Mori is SNARKY.

Protagonist: Why are you being snarky?
Mako Mori: You’re faster than this. Don’t think you are, know you are. Come on. Stop trying to hit them and hit them.
Protagonist: Goad me not, or I shall hit you with a stick too.
Mako Mori: Come and get some. 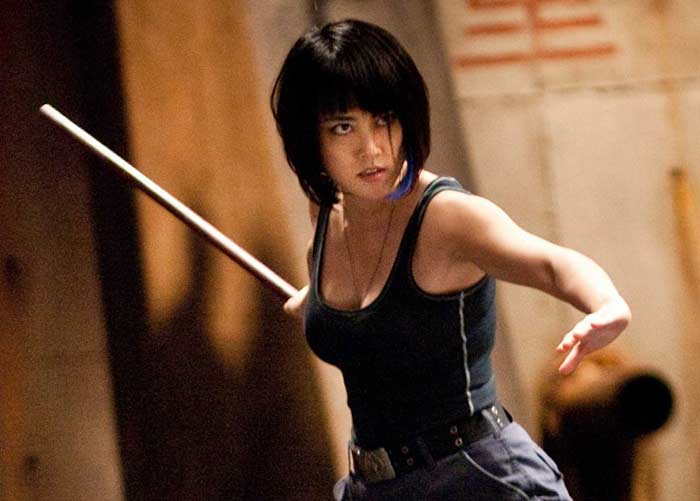 PROTAGONIST and MAKO MORI hit each other with STICKS

Mako Mori: Do you believe that my being stronger or faster has anything to do with my muscles in a giant metal robot?
Protagonist: Huh?
Mako Mori: Nothing.

They all have DINNER. The dialog WEDGES.

They have a big emotional REUNION with GLaDOS

GLaDOS: It’s been a long time. How have you been? I’ve been really busy being dead. You know, after you abandoned me on a beach in Alaska.
GLaDOS: By the way, thanks for that.

PROTAGONIST talks to MAKO MORI about how to do a VULCAN MIND MELD. She ignores his ADVICE.

The other characters have a PANIC ATTACK. People run around YELLING A LOT.

PROTAGONIST and MAKO MORI are AWKWAAAARD. The dialog WEDGES.

Whacked-Out Biologist: This dialog sucks. I’m going to mind-meld with this damaged alien monster brain I happen to have in this tank here.

The WHACKED-OUT BIOLOGIST mind-melds with the DAMAGED ALIEN BRAIN. There are SPECIAL EFFECTS and stuff.

All the remaining GIANT ROBOTS except for GLaDOS go into BATTLE. ALIENS fight GIANT ROBOTS. The audience munches POPCORN. 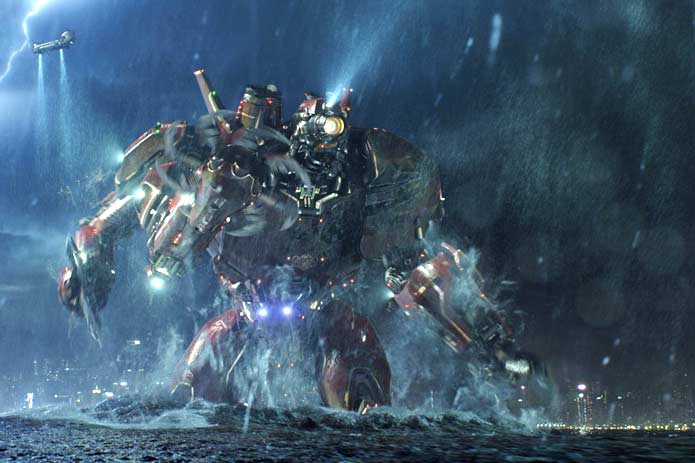 The GIGANTIC ALIENS spew ACID all over one of the GIANT ROBOTS. The giant robot crew DIES.

The GIGANTIC ALIENS beat the HELL out of the second GIANT ROBOT. The giant robot crew DIES.

Cocky giant robot pilots whose names the audience doesn’t care about: We’ll save the day!

The GIGANTIC ALIENS send out an ELECTRO-MAGNETIC PULSE that turns off the GIANT ROBOT and leaves it standing STUPIDLY in the WATER, because military-grade electronics aren’t SHIELDED

Protagonist: Now’s our chance! We can save the day! GLaDOS is immune to EMPs because it’s analog! Or, err, something.

RON MOTHERFUCKING PERLMAN tosses the WHACKED-OUT BIOLOGIST out onto the STREET, where people are RUNNING AND SCREAMING

The GIGANTIC ALIEN chases the WHACKED-OUT BIOLOGIST around for a while. Dozens of cars go FLYING IN ALL DIRECTIONS.

Whacked-Out Biologist: You mind-meld with one ravening homicidal alien bent on the destruction of all mankind just that one time, and…
Protagonist: Hey, gigantic alien! You want a piece of me?

The GIGANTIC ALIEN and the GIANT ROBOT FIGHT. Cars go FLYING EVERYWHERE. They punch each other a WHOLE BUNCH OF TIMES. More cars go FLYING. The audience eats POPCORN.

MAKO MORI pushes the GIANT SWORD BUTTON. The giant sword COMES OUT. It is all LIMP AND FLOPPY at first, but then it gets STIFF and HARD.

Protagonist: Wait, we have a giant sword?
Mako Mori: This is as close to a sex scene as this movie has.

MAKO MORI stabs the GIGANTIC FLYING ALIEN with the SWORD. It dies INSTANTLY. 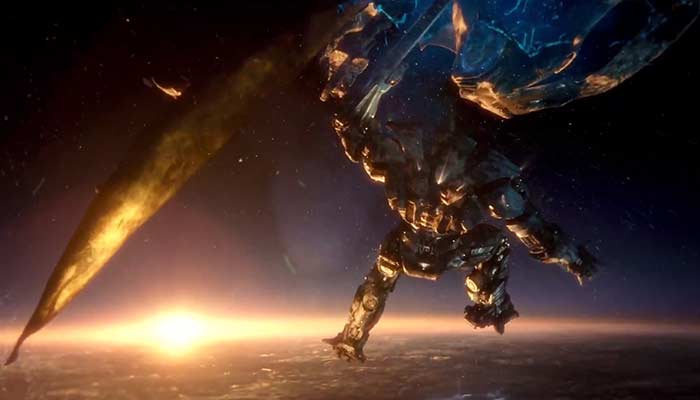 FIRE comes out of the SPINNY THING on the front of the GIANT ROBOT. Even though it’s not remotely near the giant robot’s CENTER OF MASS, somehow it SLOWS THEM DOWN, rather than, say, causing them to TUMBLE.

RON MOTHERFUCKING PERLMAN sends a bunch of PEOPLE inside the DEAD ALIEN. Something SQUISHY starts MOVING AROUND.

A baby ALIEN comes out and EATS RON MOTHERFUCKING PERLMAN, then DIES

Two more GIGANTIC ALIENS appear out of the UNDERWATER CREVASSE

Whacked-Out Biologist: I’m going to mind-meld with the dead baby alien right here on the street where all these cars have been tossed around, because my research suggests that’s the best environment for performing dangerous experiments with a high likelihood of getting me killed.
Socially Awkward Mathematician: That makes perfect sense. I accept your flawless reasoning, and I will mind-meld with the dead baby alien with you.

The two remaining GIANT ROBOTS go stomping off to the UNDERSEA CREVASSE. They PUNCH the two GIGANTIC ALIENS a whole bunch of times. The audience munches POPCORN.

The WHACKED-OUT BIOLOGIST and the SOCIALLY AWKWARD MATHEMATICIAN mind-meld with the DEAD BABY ALIEN. There are SPECIAL EFFECTS.

A third GIGANTIC ALIEN pops out and ambushes the GIANT ROBOTS by ‘SURPRISE.’ Nobody is SURPRISED.

Audience: Two giant robots beating up three alien monsters? You can’t get enough of this for my entertainment dollar!
Whacked-Out Biologist: The undersea crevasse that’s actually a portal to the alien homeworld has a DNA scanner! Only aliens can go through it! Nuclear bombs can’t!

The GIANT ROBOTS keep beating up the GIGANTIC ALIENS

They PUNCH the ALIEN MONSTERS some more

Mako Mori: We have a sword in this giant robot! Give me five seconds, I’ll push the sword button and we’ll chop them into pâté.
Protagonist: You just don’t get it, do you? 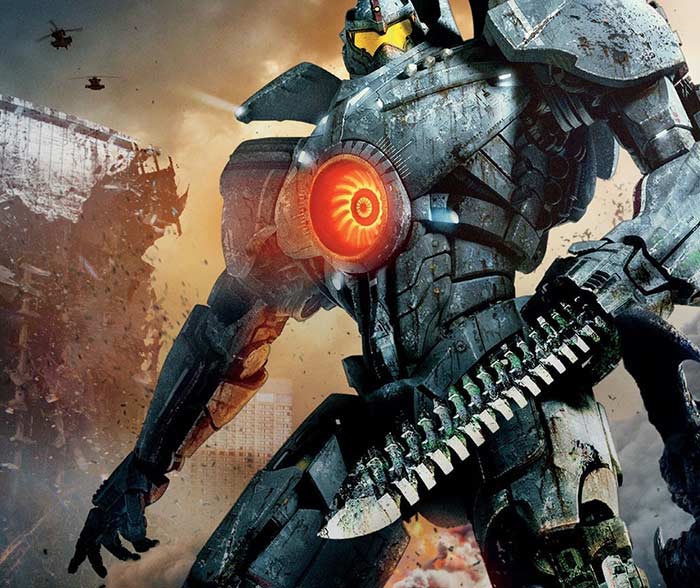 Idris Badass Elba: Dialog plot noble sacrifice.
Protagonist: That’s a capital idea! You sacrifice yourselves by blowing up the nuclear bomb to kill the aliens, then I’ll go through the undersea crevasse and cause a core meltdown in my giant robot! That totally makes sense!
Idris Badass Elba: Plot dialog dialog.
Protagonist: I think so, sir, but isn’t Regis Philbin already married?

IDRIS BADASS ELBA detonates the NUCLEAR BOMB. It fails to DAMAGE THE OTHER GIANT ROBOT or KILL THE ALIENS or MAKE A CRATER IN THE GROUND.

GLaDOS The difference between us is that I can feel pain.

Mako Mori: I’m so glad to see you again! To show you the depth of my emotion, I will now greet you using a ceremony of my people we like to call ‘squeezing the life out of you.’

The END CREDITS start to ro–