If someone walks up to you and starts talking to you about good morals and the importance of morality, what’s the first thing you think of?

If you live in the US, odds are pretty good that anyone who wants to talk morality with you is actually talking about sex. How to do it, where to do it, when to do it, in what position to do it, who to do it with…the term “morals,” especially in political discourse, has come to be a synonym for “sex.”

And if the person talking to you is a conservative Evangelical, ten will get you twenty that somewhere in that conversation about morals, you’re going to hear about sex with a partner who’s the same sex as you are–something that seems to be right down at the bottom of the Pit of Immoral Behavior, just slightly below pedophilia and at least two and a half yards beneath genocide on the relative Scale of Morality.

Or at least, it seemed really weird, until I thought about it for a bit.

The word “immoral” isn’t used to describe people very often these days. At least, it isn’t used to describe heterosexual, monogamous, married cisgendered people very often in the court of political discourse. It’s still quite popular among some segments of the conservative religious community, but it generally gets applied to sodomites, gay and bisexual people, transgendered folks, and other folks who don’t fit tidily into the prescribed box of sexual norms…with occasional side-branches directed at atheists, of course.

In the late 1800s, notable cynic Ambrose Bierce defined the word “immoral” to mean “Inexpedient. Whatever in the long run and with regard to the greater number of instances men find to be generally inexpedient comes to be considered wrong, wicked, immoral.”

And I submit that the laser focus on sex that we see in almost any popular political or religious dialog has at its heart a very potent expediency indeed, because it serves to distract us from true immorality, and causes us to focus on that which doesn’t really matter to the betterment of some very evil people indeed. 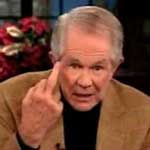 No, I don’t mean take him out behind the chemical shed and shoot him; I mean take him as an example. Pat Robertson has made himself a very wealthy, powerful, and influential man by talking endlessly about morality. Or, more specifically, talking about sexual morality: sex before marriage (he’s against it), homosexuality (against), gay marriage (against), non-traditional sexual unions (against), sex work (against, even though he admits to having employed the services of prostitutes), oral sex (surprisingly, for…as long as it’s between a married man and his wife. He’s silent on the subject of whether or not they can have onlookers watching the act.).

And yet, for all his preaching about morality, Pat Robertson is by any reasonable standards of decency an astonishingly, breathtakingly evil man.

Pat Robertson has yet to meet a wealthy foreign dictator he doesn’t like, at least when it’s economically expedient. He cozied up to Liberian strongman, sex trafficker, and war criminal Charles Taylor in exchange for a gold mining contract in Liberia. He owns African Development Company, a corporation which snuggled up to Zaire’s warlord Mobutu Sese Seko to win rights to so-called ‘blood diamonds’ mined by slave labor.

Or look at “Family Values” candidate and politician Newt Gingrich, who divorced his first wife after an affair, married his mistress, then divorced her to marry his second mistress. Said second mistress, who is still married to him, is apparently spending her time these days doing fundraising for the Romney campaign…on a platform of (wait for it) family values.

Gingrich, despite being a serial adulterer, is perceived by many folks on the right as being “moral,” presumably because hey, he ain’t gay. Yet to anyone who believes that morality lies in treating others with compassion, he is unquestionably an evil man.

This is not a new observation, of course. Many of the people who talk the loudest about “morality,” on both sides of the political divide, are deeply and profoundly evil. Mahatma Gandhi was quoted as saying “I like your Christ, I do not like your Christians. Your Christians are so unlike your Christ.” It’s not exactly a revelation that those who use talk of morality, particularly religious morality, in the public sphere are very often deeply immoral people.

Which is where Ambrose Bierce comes in.

It is not simple hypocrisy that explains the prevalence of evil among those who speak of morals. It is not that we are all born of frailty and error and each of us relates imperfectly to those around us.

It is, rather, a calculated and deliberate expediency.

Pat Robertson, Newt Gingrich, and all their ilk are evil people, consumed by a desire for power and wealth. They do not hide this at all. But there is a dilemma. In a Third World country, powerful strongmen can do pretty much whatever they like, without needing to justify themselves to anyone. But in an industrialized nation, maintaining power and wealth often requires maintaining the general goodwill of the people. How to do that, then, when you are a serial adulterer? How to do that when you own a mine that uses slave labor?

An evil man can gain the favor of generally good people, if he can set the tone of the dialog about good and evil. If he can redefine “evil” so that, rather than meaning “exploiting slave labor in Third World countries to become fabulously wealthy” it means “having sex in the wrong way,” he not only can deflect attention from his own evil, he can short-circuit the conversation about his own evil before it even begins. 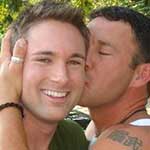 When this image dominates the public dialog about morality, someone is being snookered.

We have come to a place where “morality” means “sex” because that state of affairs is expedient to powerful, wealthy men who want to be able to indulge their lust for wealth and power unchecked.

According to the Bible, it is the love of money which is the root of all evil. It is not premarital sex, nor gay marriage, nor the burning question of whether or not married couples are allowed to give head.

Yet among the Religious right, discussion of money is strangely absent from the morality debate. The beginning and end of morality revolves exclusively around who one has sex with, and under what circumstances.

That didn’t happen by accident. That isn’t a coincidence. It happened because evil men set out, systematically and deliberately, to focus the lens of morality away from their own evil.

Every time we accept this definition of morality, every time we allow the conversation about morality to get bogged down in irrelevant sexual minutia, we work in the service of these evil men.

All sin lies in treating one another poorly. Rather than talking about the morality of gay sex, perhaps we should talk about the morality of slavery. Perhaps, if we re-focus our dialog about morality onto the evil that those who campaign on platforms of morality and virtue do, we will begin to see a better world. I would far rather that Pat Robertson divest himself from his blood diamonds and give the vast wealth he created from slave labor to the poor, than see him continue to hold influence by talking about how immoral we are if we don’t have sex the same way he does.

38 thoughts on “Some Thoughts on Morality and Power”