Since my blog post about the discussion about polyamory on the JREF forums, I’ve been poking around on the forums some more. Somehow, I managed to stumble across a thread relating to accusations of misogyny in the skeptical community, stemming from an episode at TAM last year.

TAM is an annual convention of skeptics and rationalists hosted every year by the James Randi Educational Foundation. It’s one of the largest such conventions in the country. 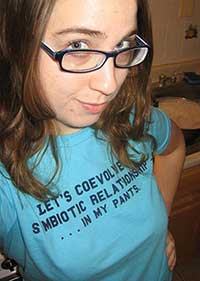 Apparently, a prominent blogger named Rebecca Watson was harassed at TAM last year. And the fallout from her complaint about it, which I somehow managed to miss almost entirely, are still going on.

I don’t read many skeptic or freethought blogs, which is probably how I missed the first go-round. A bit of scouting on Google, and a perusal of the JREF forum, shows an astonishing amount of anger, most of it of the “how dare this emotional woman tell us we’re misogynists!” variety. Which is more than a bit disappointing, when it isn’t downright rage-inducing.

In the interests of fairness, I have to say that I totally get why folks who identify as skeptics and rationalists might be especially resistant to suggestions that they are behaving inappropriately, especially with regards to sexism. A significant number of folks in the skeptics community identify as atheist. It takes quite a lot of effort for many people, especially people raised in a religious family, to break away from religious faith and embrace the ideas of rationalism and skepticism.

Once you do, there is a temptation to think of yourself as being more enlightened because of it. Things like racism and misogyny? They are those relics of patriarchal religious orthodoxy. I’m not a misogynist! I’m not a racist! I left that behind when I let go of religion. I don’t think that women are placed below men by some sort of divine pronouncement. I’m not the one trying to make women into second-class citizens. How can I be sexist?

I can remember going through a thought process something like this myself, back when I was a teenager in the process of giving up on the idea of religion.

Years later, when I was first introduced to the notion of invisible privilege and the ways that society creates a bubble of special advantages around men, it felt quite weird to grapple with the notion that I might be the beneficiary of misogyny, or even be guilty of misogynic behavior myself, without even being aware of it.

So the reaction of folks in the skeptics community when confronted with inappropriate behavior at a conference might be understandable, though it’s still disappointing. And maybe I’m naive, but the level of vitriol coming from some parts of the skeptics community against Ms. Watson and her supporters is completely over the top…and appalling.

All that is kind of beside the point, though. Yes, it can be tough to recognize the invisible sea advantages that we swim in, just as it might be hard for a fish to recognize that it’s wet.

But here’s the thing. It seems to me that anyone, regardless of whether or not he recognizes the many ways that society provides him with an invisible set of advantages that other people don’t have, who hears someone say “I feel threatened” or “I don’t feel safe here,” should start by listening.

I do believe that most of the folks in the skeptical community–indeed, most people in general–sincerely don’t want to be misogynistic (or racist or otherwise guilty of bias or oppression). And if someone claims to be a rationalist, it seems to me that if he is approached by someone else who says “I feel marginalized in this environment,” the desire to find out whether or not a problem actually exists, and to fix it if it does, should logically outweigh that little emotional voice that says “But that can’t possibly be true; I’m not like that!”

So at this point, I’d like to talk to all the guys reading my blog. Especially white guys, and most especially white guys who think that they aren’t sexist or racist. The rest of you can…I don’t know, cover your ears or something. Ready? Okay.

Listen. Guys. If you are at a conference or a sci-fi convention or something, and someone comes up to you and says “I don’t feel safe here,” you listen. And then you say “I’m sorry to hear that. This isn’t the sort of environment I want to create. What can I do to help fix the situation? What would it look like if this space were more welcoming to you? Have I participated in any way in making this space feel hostile to you, and if I have, what can I do to make it right?”

This is really, really simple It’s called “being a decent human fucking being.”

Now, I know what you’re thinking. It’s probably some little thing that’s gotten way blown out of proportion, right? There’s not really a problem; this person is just being oversensitive. Right?

And that is one possibility, sure.

But seriously? Given the history of treatment of women and minorities in this society, and given how goddamn hard it is to be aware of the advantages you have over folks who aren’t as white or aren’t as male as you are, that probability is pretty goddamn remote. A lot more remote than you think it is.

Doesn’t matter, though. You aren’t going to find out if there’s merit or not if you don’t (a) listen and (b) consider the possibility that there’s some validity to the complaint.

And while we’re at it, let me tell you what you don’t do.

You don’t say “Well, I don’t see a problem here.” That just makes you look like an ass. If there’s a problem with sexism or racism and you’re a white dude, of course you’re not going to see the problem. Duh.

And you don’t say “That doesn’t sound like that big a deal to me.” That just makes you sound like an even bigger ass. If you haven’t had the experience of what it’s like facing constant systematic exclusion–and believe me, as a white dude, you probably haven’t, any more than I have–you’re not really in a position to tell whether or not it’s a big deal.

And seriously, if you say anything, and I do mean anything, along the lines of “All these feminists are just out to get men” or “You’re just being hypersensitive” or, God help you, “you must be on the rag,” you don’t sound like an ass, you ARE an ass. You’re part of the problem. Whether you think of yourself as biased or not, the simple fact that you can think along those lines kinda proves the point. That setting isn’t welcoming because you’re one of the people who is making it that way.

Look, I know it can be hard to acknowledge that you have been given advantages simply by virtue of who you are; I felt the same way. It’s a bit like trying to look at your own back.

But you’re a rationalist, right? C’mon, you can figure this out. Treat it like an intellectual puzzle; that is exactly what it is.

Yes, it can be a little tricky to navigate this stuff. So in the interests of helping to promote better understanding for everyone, I’ve created a handy clip-and-fold guidebook that you can print out and carry in your wallet. Clicky on the picture for a PDF version!

96 thoughts on “Skeptics and Misogyny and Privilege, Oh My”