We had a plan, honest we did.

It was a simple plan, too. There wasn’t any of the “When NATO realizes the futility of resistance, they will peacefully turn over control of the free world to me” complexities of most of my plans. Our simple plan was to leave St. Louis and head toward Cincinnati, where we would meet with the pet lesbians late in the evening. From there, we would…

Okay, let me back up a bit.

zaiah and I have a pair of pet lesbians. We met them a couple of years back, as regular readers may already know, when they were couch-surfing their way down the West Coast. Owing to an unfortunate (for them) or very fortunate (for us) confluence of events, their plans in Portland had fallen through at the last moment, and a mutual friend had phoned me up and said “There’s a couple of people who really need a place to stay for a night or two, can you give them crash space?”

They are, it is fair to say, two of the most adorable people currently alive today. In fact, they are so adorable that, rumor has it, when nobody’s looking they turn (in some quantum observer-locked loop kind of way) into a pile of kittens. I mean, just look at the two of them! This level of awesome should not be attempted by anyone save trained professionals.

So zaiah and I have unofficially officially adopted them, kinda. When they heard about our cross-country trip, they offered us crash space in Cincinnati, and since spending time with them is something that’s awesome under any circumstances, I jumped at the chance.

So it was with sadness but also joy that I left St. Louis behind, knowing that as each passing mile brought us farther away from City Museum, it took us closer by the same degree to Cincinnati. We had planned to stop for dinner in Louisville, Kentucky, before reaching our destination, and to linger the following day, taking in the delights of Cincinnati in the company of two of the most delightful people I have ever met.

I have but one picture of Louisville. My memories of the place extend scarcely beyond this; for all I know, Louisville itself extends scarcely beyond this. Perhaps it is not even a real place; perhaps it exists in a kind of limbo, a psychological space where one’s companions are carried away by Guatemalans, a psychic residual trace left after the actual memories are erased. But I am getting ahead of myself. 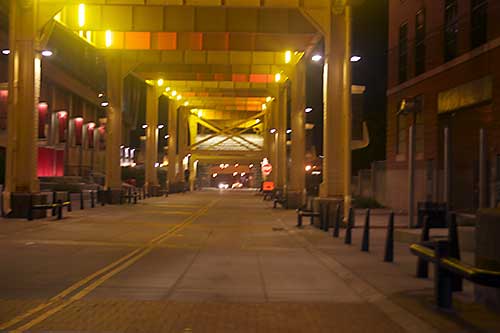 Fate, it seemed, had other plans.

The first wrinkle was Hurricane Irene, also heading toward Beantown and scheduled to arrive about when we did. The second was the Guatemalans.

Irene demolished our plans in her wet and windy way. It started when we hit Louisville, where we arranged to meet with some friends of our traveling companion Erica. We decided to eat at The Old Spaghetti Factory, which was perhaps our undoing; never trust decisions made at any establishment which features non-working replicas of trolley cars prominently in its decour, as my dear old grandmum used to say.

The first sign that trouble was afoot came when Erica excused herself to receive a telephone call. She returned after a considerable delay (and the arrival of our food, which anyone familiar with The Old Spaghetti Factory’s general level of service is no small measure of time at all) with news that her parents feared for her safety in the face of the oncoming hurricane and wanted her to abandon her odyssey with us at once. The arrival of her friends, a pair of mild-mannered and agreeable Chinese-speaking Guatemalans, happened at approximately the same time, such that they, too, were aware of her family’s proclamation.

They had, apparently, at least to the best of your humble scribe’s ability to put together a cohesive narrative from three separate conversation threads, one of them being made by a person quite visibly upset, journeyed themselves from Nashville to Louisville just for the purpose of dining with us. The notion that Erica was to cease her travels with us forthwith posed something of a logistical dilemma, as it left her with no means for returning home from that particular place.

Her friends offered to help with the logistics by giving her a ride with them back to Nashville, which would take her some small distance, I suppose, back toward Portland, but not by so much as to make a significant difference, logistically speaking.

She discussed this possibility, or at least I infer that she discussed this possibility, with them at some length. As the discussion took place largely in Chinese, a language which is, I fear, entirely opaque to your humble scribe, I do not feel entirely comfortable vouching for the contents of the conversation. They could, for all I know, have been talking about nuclear fusion, which is something I’ve been meaning to write about in this very blog, or anime, or indeed even the cost of hiring a professional assassin on the open market (something which I also must confess to having entirely no knowledge of at all), or automotive repair, or découpage, or just about anything else, I reckon.

The meal progressed, bills were settled, and our traveling companion bade us farewell with the news that she would be taking up the offer of a lift to Nashville in the company of her friends.

I am not sure, to this very day, quite how that went, as the two of them had arrived in a two-seat car. My knowledge of geography is almost as limited as my knowledge of spoken Chinese, so I can not venture a guess about the practicality of traveling from Louisville to Nashville on the lap of a Guatemalan gentleman. Some weeks later, well after the conclusion of the journey through which I am so laboriously making my way, it came to my understanding that she had in fact returned to Portland, though I can not speak to the hows of this. At this point, as we bid our goodbyes in the parking lot, her path diverged from ours, and she passed from this story.

Our stay with the pet lesbians was to be similarly impacted by Irene, but that will wait for the telling of the final part of our tale.

10 thoughts on “Boston Chapter 9: When Guatemalans and Nature Attack”