Back when I was married and living in Tampa, one of my favorite sex toys in the sex toy drawer box closet was a violet wand. It’s a gadget that you plug glass electrodes into and then plug into the wall. When you turn it on, it makes a buzzing noise and the glass electrodes turn purple, and then when you touch someone with the electrodes you get a sensation that’s like…

Well, it’s kinda hard to describe what it’s like. A lot of folks (like me!) who don’t like electrical play still like violet wands, because they don’t really feel like electric shocks. It’s more like little teensy hot needles caressing your skin. There are lots of different shapes of electrodes, that all make different sensations, but that’s the basic theme.

They’re amazing toys. They’re also very spendy. The violet wand I used to have cost me about $700, so when I lost it, I couldn’t afford to replace it, and I’ve been missing it ever since.

Recently, JT’s Stockroom sent me a neon wand as part of a promotion. And, to be honest, I’ve been waiting for someone to realize the market for cheap, reliable violet wands for rather a long time. 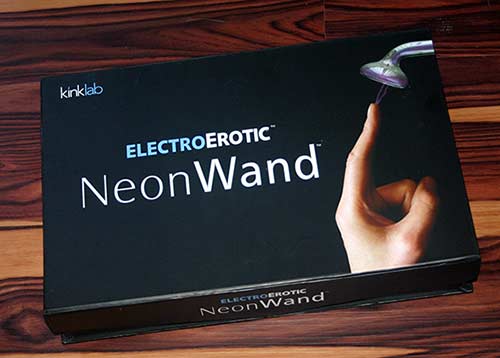 This is the Kinklab Neon Wand. If you really want to get technical, it’s not a violet wand, though the reasons that’s true are largely academic.

But, since this journal has never been afraid to venture forth into the academic, I’ll explain why; click here if you’re interested.

The violet wand was invented at the turn of the century (I want to say about 1903 or so) as a bogus quack “medical” device. The warming tingle was said to cure everything from arthritis to tuberculosis to consumption. As near as I can tell, pretty much everything in the world used to be said to cure diseases back then, although the only one of them I can think of that actually did anything at all was opium, which might be why they put it in their breakfast cereal. But I digress. 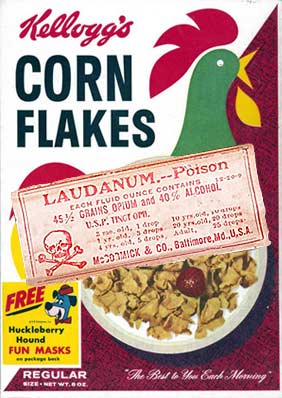 1903’s answer to pretty much everything.

A lot of folks say that a violet wand is a Tesla coil. That’s not actually true. A Tesla coil is an air-cored resonant coil in which the primary and secondary windings share the same air core. You vary the output of a Tesla coil by varying the primary winding.

A violet wand is actually an Oudin coil–an iron-core resonant coil where the primary and secondary winding share the same iron core, and the primary winding is attached to a mechanical interrupter. You vary the output of an Oudin coil by changing the interrupter. In a violet wand, the interruptor is a magnet that vibrates very quickly; you change how strong the output is by turning a knob connected to a screw that actually changes the height of the vibrating magnet. That’s why violet wands always make that characteristic buzzing noise; you’re hearing the magnet vibrating.

The neon wand doesn’t use an old-fashioned Oudin coil at all; it’s entirely solid state. It uses a circuit board with electronics that are more similar to a camera strobe than they are to a resonating coil, though that’s a bit of an oversimplification. Basically, they’re an entirely different technology that does pretty much the same thing. These differences mean that the neon wand is way, way cheaper than a violet wand. In this case, nearly an order of magnitude cheaper1 than the violet wand I used to have.

The Neon Wand comes with four glass attachments. They’re similar to the attachments on a violet wand, though I’m told they’re not interchangeable with violet wand attachments, as the neon wand generates significantly less power.

A few nights back, one of my friends came over to meet our new puppies, and saw the wand sitting on my desk. Her first question is “What is that, some kind of Apple accessory?”–which will give you some idea of the design aesthetics and build quality of the wand. I asked her if she’d help me take pictures of the attachments, and she said yes, primarily I think because there’s a part of her that really rather likes mad science. There was this one time…but again, I digress.

Anyway, I set up a tripod and had her hold the wand against a wooden frame so it wouldn’t move while I did time lapse photos of the glowy bits. 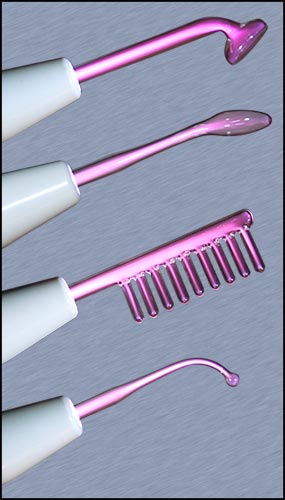 The neon wand isn’t as powerful as my old violet wand. Even at full power, it has only a moderately strong zap. The sensation varies with the surface area of the contact, so the mushroom electrode at the top provides a very mild to mild sensation, dependong on the power setting. The electrode second from the top, which Kinklabs calls the “tongue,” is a bit stronger; it’s about as strong as a mushroom electrode from an old-fashioned violet wand.

The comb electrode is my favorite. It can create quite a wide variety of sensations, from gentle warmth to a sharp sting, depending on where and how you touch with it; pass it back and forth over your partner’s body and the sensation changes quite rapidly.

The bottom probe is the stingiest of the lot. Since the neon wand isn’t as powerful as a violet wand, Kinklabs gives you the bottom electrode, with a very small surface area, to provide for folks who like stronger sensation.

The one thing I was disappointed about is the absence of a body contact probe. With a conventional violet wand, one of the more fun attachments is just a long beaded chain that ends in a metal pad. You tuck the pad into your waistband, and then your entire body becomes the electrode; when you touch your partner with your fingertips, little sparks jump from your fingers and your partner feels a tingle. It’s a lot of fun, especially if your sensibilities run toward mad science, which mine do.

I own a massive cast-iron recreation of a Medieval battle axe, which I like to hold when I use a body contact electrode. When I touch my partner with the axe, the edges glow blue and little sparks jump from the axe to her skin. It’s dramatic and it’s fun and it gets a lot of attention at play parties…ahem.

The omission of a body contact probe can be forgiven, I think, when one considers that the total price of this kit is lower than what one might pay for a single accessory for an old-fashioned violet wand.

And if your kink is mad science (and whose isn’t, really?), this thing is absolutely an essential part of your toy box. “Now just lie back and relax. With the power of lightning, I will…” BZZT! “Oh, Doctor!”

So, if this sort of thing interests you, you can find them here. And if, God help you, you’re anything like me, it will become one of your favorite devices ever.

1 Violet wands have always cost hundreds of dollars. It would be possible to make them cheaper, but that’s the price the market will bear, so that’s where they stay. Hypothetical ideas about free markets aside, the fact is that it’s often true that prices for a product remain high even when many folks compete in the same market niche, just because when you do the math you find that (a) price cooperation is more profitable than price competition, and (b) a smaller slice of a bigger pie is often worth more than a larger slice of a smaller pie. The upshot is that violet wands set you back a wad of dough no matter who you get ’em from. But that’s a whole different post altogether.