On March 23 of this year, two notable things happened.

The first was that I celebrated the anniversary of my birth. My sweetie zaiah and I have been working very hard on the project to remodel our home into a dungeon to host play parties; to help celebrate the occasion of my birth, a lot of friends came over and did a bang-up awesome job of helping us paint the soon-to-be dungeon. It’s still not finished, but we made a lot of progress.

The second thing that happened is that Apple Computer, in apparent response to a petition by a GBLT group, pulled an app by a group called Exodus International from the App Store. And in all honesty, I’m a bit disappointed in the activists who demanded its withdrawal.

Exodus International, in case you have been fortunate enough to avoid these lunkheads so far, is a right-wing Christian organization founded on the premise that through prayer and “spiritual healing” (whatever that is), they can cure people of homosexuality and turn them into nice, normal, inoffensive heterosexuals.

Leaving aside for a moment that there are many people who can shag members of the same sex and then end up in heterosexual relationships–a better term for such folks than “ex-gay” might be “bisexual” or “pansexual,” if one wants to get all semantic about it–the notion that homosexuality is a condition or that it can (or should!) be “cured” is absurd on the face of it.

I don’t much cotton to Exodus International, nor for that matter to any other group that thinks there’s an invisible dude who lives up in the sky who has rules about who you’re supposed to shag or how to do it, and that they have the direct skinny on what those invisible dude’s rules are and how they should be implemented.

But here’s the thing. As odious, offensive, and just plain stupid as Exodus International (the “Exodus” is an exodus from gayhood–get it? Get it? Aren’t they just so clever?) might be–and believe me, if you look at these folks’ Web site, the stupid, it burns–I think the GBLT shot itself in the foot, and in the process showed that some of its members can match the Christian right intolerance for intolerance and deception for deception–by petitioning for its removal.

But first, before I go into why, let me explain something about how the app got approved in the first place. Some noisy but uninformed folks have spouted a lot of nonsense about how Bad And Wrong Apple was to have approved the app in the first place, pointing to how its “unoffensive” rating within Apple’s system showed that Apple is an anti-gay, right-wing establishment.

It’s rubbish. Apple’s second in command, Tim Cook, is arguably the most powerful gay man in all of Silicon Valley. Apple has a long history as a gay-friendly place to work. Apple’s App Store submissions are not, and have not for quite some time, screened by a human being; Apple uses a suite of automated tools to check that apps conform to Apple’s programming guidelines. The Exodus International app was not hand-built; it was built using a pre-existing application framework, one that is used for many other App Store apps. The framework draws its content from a Web site (in this case, the Exodus International Web site); its content was not populated until after the app was approved.

So, no, Apple does not habitually go around approving anti-gay apps. The notion that some person at Apple saw the app and said “Cool! An app by an anti-gay organization; well, let me just put this up on the App Store straightaway, then!” is simply factually wrong.

While we’re on the subject, let’s talk about what the app itself is not.

Shortly after the app came out, a GLBT group calling itself Truth Wins Out put up a petition on change.org calling on Apple to remove the app. The campaign that supported the petition described the app as containing information that was scientifically unsound and potentially dangerous about “reparative therapy,” the notion that homosexuality can be “cured,” and described the app as an “ex-gay app.”

But that’s not really what the app was. The app was, essentially, a calendar of events and a bunch of Web links.

As such, the content of the app was quite a lot different from what it was claimed to be.

Now, this country has a long, storied tradition of dealing with upsetting, inflammatory, objectionable, or uncomfortable content by banning it. For a society of folks quick to shout “free speech!” whenever someone suggests we ought not say something we want to say, we’re just as quick to shout “ban it!” whenever someone else says something we think they ought not say. It’s a sort of national cognitive dissonance, a hypocrisy that’s woven into the American social fabric.

The gay community has been the target of that “ban it!” impulse for longer than this country was a country. It’s no accident that homosexuality has been described as “the love that dare not speak its name.” So it’s a bit disappointing to me to see the folks who’ve been harmed by the notion that certain ideas should not be discussed being so quick to turn that particular weapon back onto others.

And the fact is, by doing so they committed two wrongs. First, they used tactics that are disingenuous at best. Second, they played right into the hands of Exodus International, a group which the cynic in me suspects wanted to have their app banned.

When I first became aware of the Exodus app, I had read about it on Web sites run by pro-GLBT activists and bloggers. I came away with the notion that the app was a how-to guide for “curing” gays. It wasn’t until I started looking at screen shots and app descriptions–by the time I found out about it, the app had already been removed from the App Store–that I learned its content was considerably different from what I’d been lead to believe.

Whenever I hear someone misstate or overstate an argument against something, that leads me to the conclusion that the person who’s making the argument doesn’t really believe his case to be terribly persuasive. Exaggeration is the tool of first resort for someone who really, really, really doesn’t like something, but who doesn’t think that other folks will share his opinion if it’s stated factually.

And the fact that these arguments were picked up by so many folks suggests to me that a lot of bloggers fell into the same trap that the religious right often falls into–condemning something without actually seeing it. We (and by “we” I mean progressive bloggers, activists, and writers) tend to snigger and laugh at Christians who call for banning a book or a movie and then, when asked if they’ve actually seen it, say “No! Of course I haven’t!” as if their ignorance somehow enhances their moral superiority.

That’s pretty dumb. Fact-checking is (or at least ought to be) a basic, basic part of informed activism of ANY sort.

On another forum I read, a lot of folks were hailing the removal of the app from the App Store as a triumph of Libertarianism. I found that notion pretty weird; Apple acts as an absolute regulator of the App Store, with the ability to enforce any rules it chooses about what may and may not be found there.

Now, I am not a Libertarian by any stretch of the imagination. But it seems to me that appealing to an absolute regulator to pass a rule banning a product that you don’t like, for the purpose of ensuring that the product is not available to anyone, is precisely the reverse of Libertarian belief. A more reasonable interpretation of Libertarianism, as I understand it, is that the market itself determines what has value; if folks don’t think the Exodus app has value, they don’t download it. If they do think it has value, they do download it. And in that way, individuals, rather than overarching regulatory authorities, make up their own minds about what has value and what doesn’t.

Which brings up a point that I think is absolutely vital in any pluralistic society: the solution to bad speech is more speech, not less speech.

The fact is, there are people who think that Exodus’ ideas have merit. And those folks don’t go away because the app does! The solution is not to try to control the dissemination of the ideas; that’s a fool’s quest. The solution to bad speech is more speech. Hatred and misinformation thrive in dark places. 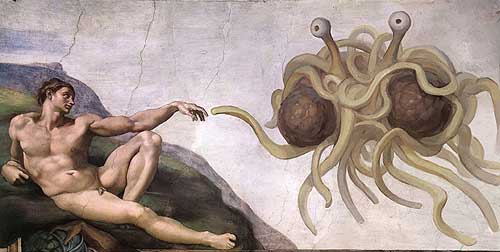 I wish–I really, really wish–I had been aware of the Exodus app before pple pulled it down. Do you want to know what I would have done? I’ll tell you.

If there is one thing that right-wing religious wingnuts can not abide, it’s mockery. Humor is a far more powerful weapon than the banhammer. And frankly, I think that providing funds–as in, actual, real money–to GLBT groups would do a lot more to protect at-risk people, particularly the most vulnerable people targeted by Exodus International–than just removing an app from the App Store would have.

As it stands now, the GLBT activists have scored a stunning own-goal by playing right into the hands of Exodus International. I really do believe that they expected their app to be banned; c’mon, Apple already has policies against this sort of thing, so it was really just a question of time.

But by creating the petition and making so much noise, the activists have turned themselves into an Exodus photo op. They have allowed Exodus to crank up the press release machinery saying “See? See? Look at these hypocritical gays! They accuse us of intolerance, and then they use distortion and misinformation to advance the Gay Agenda by silencing our voices!” (The fundraising appeal along those lines is already up and running on the Exodus Web site.) And, y’know, it’s kinda hard to argue the point.

22 thoughts on “Force Wins Out”