I currently have about 40 windows open in my browser, some of which have been sitting there for nearly two months, so you all know what that means! Time for another list of links bringing you wonders beyond imagination from all around the Web.

From the Department of You Can’t Make That Shit Up

In the news from Miami last October, a call went out to a bomb squad to defuse a suspicious package full of kittens. From the story:

Employees at a Cocoa Beach Social Security office called 911 to report a “suspicious package” was left on their doorstep with no postage or address. […] A quick examination by the experts determined the box’s contents was about to explode – with cute and cuddliness. Inside were two kittens.

Soviet Russia was a weird, weird place. When they weren’t building nuclear-powered lighthouses, they were floating projects to dam the Bearing Strait and melt the polar ice cap, which is certainly one way to get a northern port that doesn’t freeze over in winter.

In Italy, the land of the Pope and expensive leather shoes, the High Court annulled a marriage because the wife thought about having sex with other people. Apparently, she wanted an open relationship, he didn’t but married her anyway, then sought an annulment some time later because he couldn’t come to terms with her desire to do the deed with other men. The Italian courts called it a “virtual” betrayal, as opposed presumably to a real one. Thoughtcrime can apparently be a civil offense too. Wonder if he ever thught about another woman?

Unclear on the Concept: In Tennessee, a US judge wrote that military service should be open to lesbians, “thus giving straight male GIs a fair shot at converting lesbians and bringing them into the mainstream.” This would not apply to gay men, who he wrote “spread disease at a rate out of all proportion to their numbers in our population and should be excluded from the military.”

And in more political nuttiness, the new US subcommittee chair on environmentalism, right-wing religious conservative John Shimkus, says that global warming can’t possibly be happening because it contradicts the Bible. His reasinong for believing that global warming (and any other form of environmentla distruction) can’t ever happen: “I want to start with Genesis:8, verse 21 and 22, ‘Never again will I curse the ground because of man even though every inclination of his heart is evil from childhood and never again will I destroy all living creatures as I have done. As long as the earth endures, sea, time and harvest, cold and heat, summer and winter, day and night will never cease.’ I believe that’s the infallible word of God and that’s the way it’s going to be for his creation.”

Too Cool for Words

Tron: Legacy may have been a lame, half-assed attempt at a movie with dialog so astonishingly awful that Jeff Bridges actually wrinkled his nose while he was reciting some of his lines, but it gave birth to what is arguably one of the coolest things on the road: the street-legal lightcycle. This gorgeous piece of machinery comes complete with a helmet with cool light effects as well; here’s a picture: 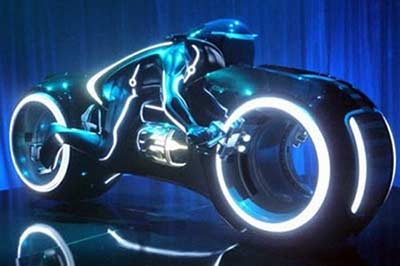 I love urban decay. I love large-scale engineering projects. I love bizarre Russian cold-war excess. So it’s probably no surprise I’m a big fan of EnglishRussia, the Web site that dedicates itself to all things bizarrely Russian. One of my favorite EnglishRussia posts these days is this photo shoot of an old, abandoned Russian submarine base located in the Ukraine. If I ever make it back to Eastern Europe, I’d dearly love to see this place. (Also on EnglishRussia, the collection of Cold War military vehicles converted to tractors and construction equipment is pretty fun.)

It wouldn’t be a linky-links collection if it didn’t include sex. First up, for all you tentacle lovers out there, comes Necronomicox (link NSFW), customizable silicone sex toys inspired by the Cthulhu mythos. Cthluhu may be sleeping, but I’m coming!

In more technical news, it turns out that the pain centers in the brain are active during female orgasm. This handily explains why some forms of pain can enhance sexual gratification, and also shows just how complex the orgiastic response is.

And speaking of pain and sex, this article on non-consent and humiliation fetishes, excerpted from the book “Yes Means Yes,” is a good read. It talks about being both a feminist and a sexually submissive woman, something I’ve long said is not actually a contradiction at all.

It still, to this day, blows my mind that people actually believe in homeopathy, the notion that water can somehow remember “mystical energy vibrations” from having things dissolved in it in such small concentrations that not even one atom of the supposed active ingredient is left in the “medicine.” According to this line of thought, if you have a headache you want to get rid of, take one aspirin, crush it into fine powder, dissolve one tiny speck of that powder in a bathtub full of water, and then take one drop of the resulting liquid, and that’ll fix you right up. This clever homeopathy vs. science metaphor nicely illuminates the silly reasoning–and I use that word very loosely–behind homeopathic “medicine.”

Research into schizophrenia is starting to suggest that a viral infection early in life, during a critical period of brain development, may be linked to schizophrenia later in life. This so-called “insanity virus,” or other viral infections which disrupt brain development, may be linked to other types of mental illness as well.

From Information Is Beautiful, which has linked to some of my sexual infographics in the past, comes this interactive Mountains out of Molehills chart showing the things we’re afraid of, extracted from media scare stories about various purported threats. The relationship between the level of danger (in terms of number of lives lost) and the level of fear is really interesting; people are about as scared of bird flu (which kills less than 300 people a year) as they are of swine flu (which kills 18,000), but are barely even aware of killer wasps, which kill 11,000 people a year.

Something that I’ve dreamed about for years is now one step closer to reality: flexible subdermal LEDs that can be implanted under the skin. Forget boring old-tech static tattoos; give me glowing tattoos, oh yeah! Though I think I’ll wait for the 2.0 version, myself.

I’m Comic Sans, Asshole — a spirited defense of this much-maligned typeface that it’s so trendy to hate.