There’s nothing like being held for ransom and then squabbled over like the white meat on Thanksgiving’s turkey that focuses the mind. There is also, it must be said, little good that can come of having one’s mind focused on Knight Rider. There is a dirty little secret of Knight Rider, and I don’t mean the one about how it jumped the shark with the Cylonesque talking car’s evil twin. No, the dirty little secret of Knight Rider was that it was a children’s show that nevertheless managed to run ads aimed at grown men.

But again I digress.

Crisis averted and safe passage assured, I ventured farther into Oslo, and soon stumbled upon the magnificent town hall near the center of town. 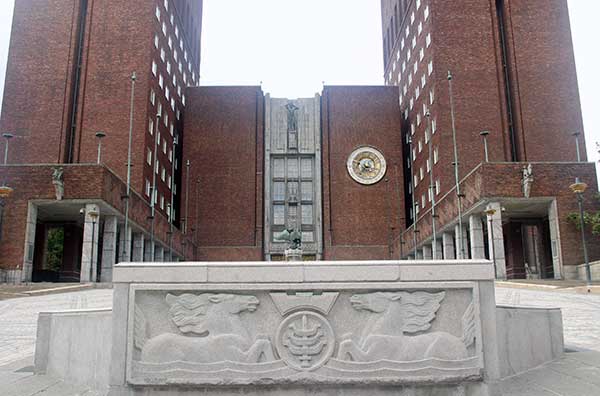 It is a brooding and majestic place, a fit center from which to rule a vast empire. You can tell by the horses. Horses engraved in stone always mean business.

Along the column-flanked overhangs to the left and the right, rows of wood carvings remind us of what is to come during the Final Days, when a great darkness shall descend upon the earth. 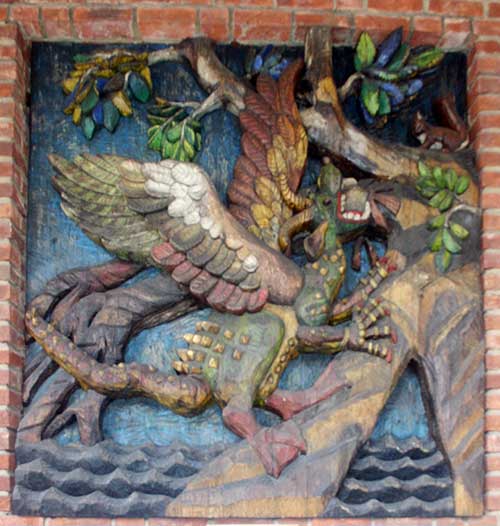 This particular carving shows the winged serpent-beast Nidhogg gnawing one of the roots of Yggdrasil, the World-Tree. In his malice and evil, he tears perpetually at the root of all things, hoping to strike oil. Some say that if he succeeds, there will be a great calamity, with the lifeblood of Yggdrasil gushing out uncontained during three long months of wailing and suffering, with much hand-wringing and the fall of many tears, before finally being staunched by a combination of a gigantic cap positioned by remotely-controlled robotic servants and a relief well being drilled alongside the gashes of Nidhogg’s enormous fangs. Afterward will come a Tribulation, in which a great king will be forced to give up his idyllic life of yacht racing and abdicate his throne in disgrace.

Others, of course, say that this is merely a fanciful tale told for the entertainment of children, and that nothing like this can ever really happen.

The Oslo town hall is richly decorated with statues and carvings. Im not sure of these geese are wrestling or having sex, but then, there have been times in my life when I was not sure if I was wrestling or having sex. When I was in high school, I had this crush on the girl next door, see, and she and I would often wrestle with one another…but I digress. 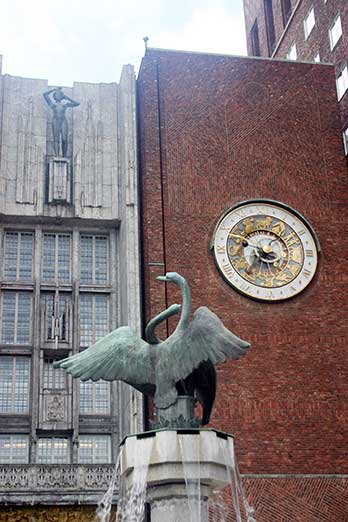 Or are they swans? The ornithology of waterfowl, like the distinction between wrestling and sex, is not one of my areas of expertise.

I do quite like the statue atop the building’s facade, though. 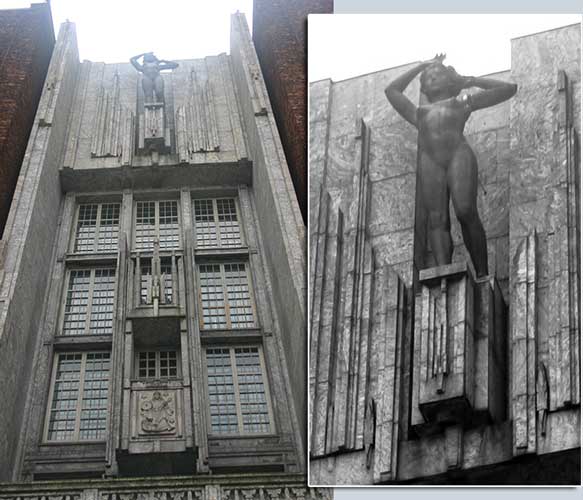 The whole thing has a vaguely Stalinesque feel to it, or it would if Joseph Stalin hadn’t been such a cob-faced prude.

The balcony is just lovely. From here, the Grammaton Clerics issue their edicts to the city’s citizens, and it is to here that any citizen suspected of either emotion or artistic expression is taken in order to stand trial. And by “stand trial,” I mean “get shot a whole bunch of times in dramatic slow motion by Christian Bale, but, y’know, back when he was cool, before he became a mincing, emotionally volatile momma’s boy like he is now.”

One day, my secret lair will have a balcony that looks just like this.

The main door to the town hall is decorated with this mural on its lintel. 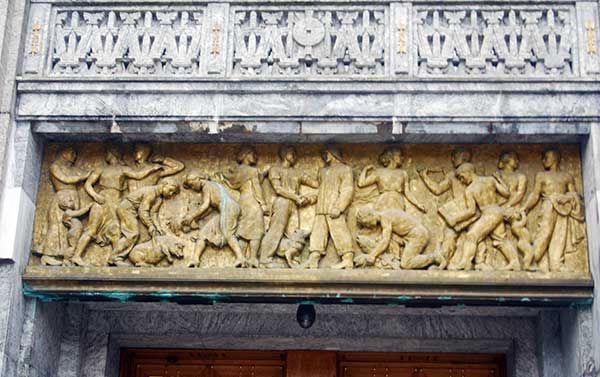 It depicts, as near as I can puzzle out, two Masters of Capitalism, perhaps John Galt and Ragnar Danneskjöld, shaking hands to cement a deal, while all about them the machinery of commerce hums, guided by Adam Smith’s hand toward a Utopian Worker’s Paradise under the wise and benevolent rule of Kim Jong Il…though I may have my fairy tales mixed up. Whatever, I’m sure that whenever two guys shake hands, it’s always good news for everyone else.

The door itself is also adorned with artwork, though done in a radically different style. 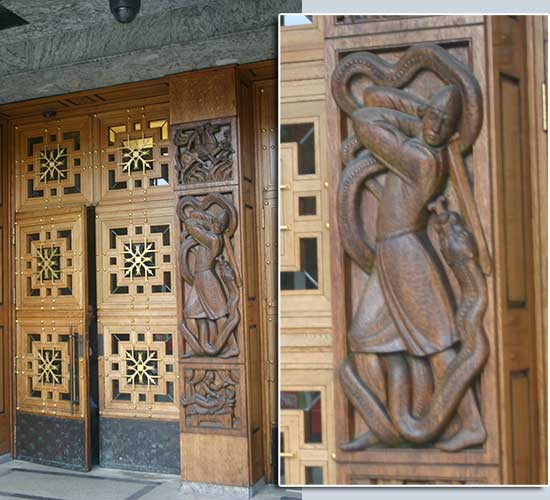 The town hall was closed the day I was in Oslo, which was very sad; I really wanted to see the machinery of Norse justice in action. As I ran around taking pictures, though, a woman cracked the door and watched me from the inside. I have no idea if she was armed or not.

The Norse love their severe, narrow balconies almost as much as they love their cannon. 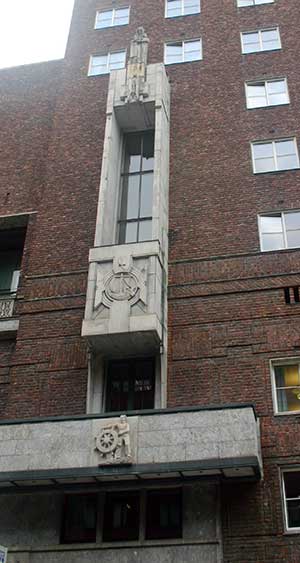 One day, my secret lair will have…

No, screw that. One day, my secret lair will be this place. Only with, like, lasers and stuff. Because lasers are cool.

On the way back from the town hall, I found a curious bit of graffiti on the wall. I don’t understand Norse graffiti.

It appears to my eyes to have been written by someone whose passion was as great as his grasp of English spelling and grammar was tenuous. Though to be fair, it’s a bit surprising to see graffiti in any English, broken or no, in a city whose dominant language is nothing like English.

The strangest discovery in Oslo awaited my return to the ship. Nestled beneath a tree right on the edge of the port one finds, most unexpectedly, a giant stone statue of American president Franklin Delano Roosevelt. 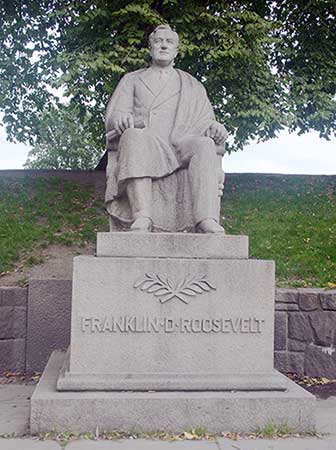 I didn’t expect to see him sitting here, so far from home. It seems that, like many Americans, I am underinformed about our own glorious history, and about the role our past leaders have played in many other nations during their time upon the world stage.

But the Norse have not forgotten, oh no. They remember. They remember President Roosevelt’s service to their nation, when he led the Norwegian Air Force against the armies of Napoleon during the Battle of the Bulge. They remember how he brought light on that dark day, using his powers to turn the tide of battle at the moment when all hope seemed lost.

And they remember, too, his promise to them and to all mankind, that he will return again, when the final battle of Ragnarök has begin and Odin has been slain by the great wolf Fenrir. They remember his pledge to rise once more, to take Odin’s seat at the head of the gods and to battle the forces of evil for the salvation of all of us.