Godwin’s Law holds that in any conversation on the Internet that gets heated enough, eventually someone on one side of the issue (whatever it may be) will compare the people on the other side to Nazis. As soon as a reference to Nazis comes into play, according to convention, the conversation is deemed to be over and whoever mentioned the Nazis has lost.

I would like to propose that this same rule be applied in the real world, and furthermore, I would like to suggest that Us magazine be declared the world’s first losers. Apparently, there’s some Hollywood star in some kind of broken, dysfunctional relationship with some guy who cheats on her a lot. And, since she’s cute and sexy, he’s wrong. (Which he is anyway, but not for that reason, though I digress).

Anyway, we stopped at a truck stop on the way back from Atlanta to Tampa last night, where I found this gem. Us magazine, I hereby invoke Godwin and declare you the loser: 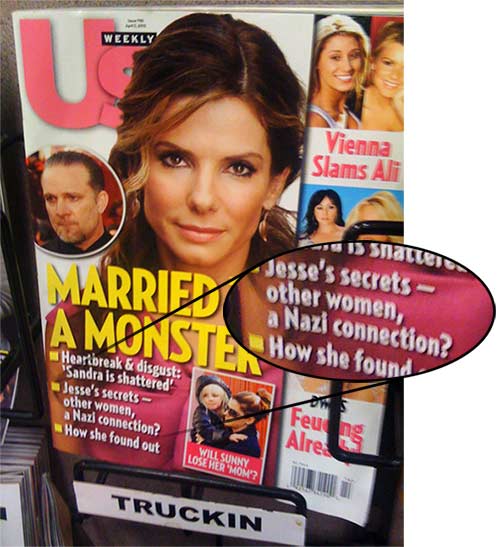