Naica, Mexico is home to a number of lead and silver mines. It is also home to a geological formation that appears to be unique in all the world: the Crystal Cave of Giants, discovered accidentally by mine workers in 2000.

The Crystal Cave is a gigantic underground formation containing the largest natural crystal formations ever recorded. The cave is superheated by a pocket of subsurface magma, and until recently was entirely flooded with water that was supersaturated with gypsum and other minerals. The combination of high temperature, superheated and supersaturated water, and time (lots of it–about 500,000 years, to be exact) produced one of the most mind-bogglingly beautiful things on earth: 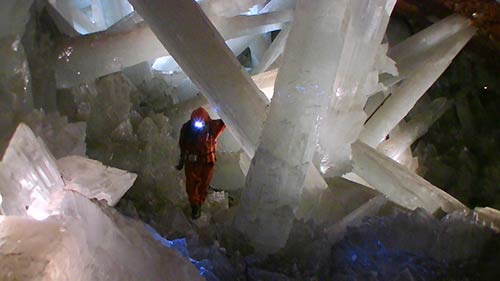 The cave has been pumped dry by mine workers, who accidentally broke into it while mining for lead. It’s still superheated by magma; the temperature within the cave is a steady 122 degrees F with a humidity of over 90%. Explorers in the cave use special chilled suits and breathing masks, and even with this equipment can only remain within it for 15-45 minutes at a time.

The cave is doomed; when the mines are played out over the next few years, the mining companies will stop pumping the water out, and the influx of new, non-supersaturated water will destroy the crystal formations. There’s more about the cave, and more pictures, here. 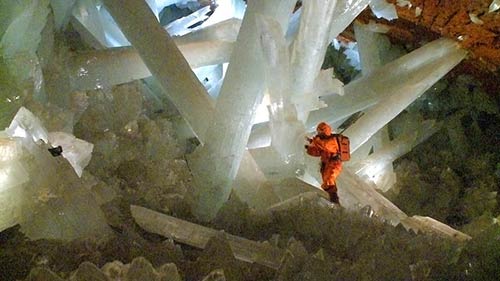 I love the physical world. There is not a single day of my life that goes by when I am not boggled and awestruck by how magnificent this universe is. Should I live to be ten thousand years old, I will never, ever stop being awestruck by how awesome all of this is. Take a handful of basic particles, make them obey certain fairly simple rules, and the things you end up with are beautiful and magnificent beyond comprehension.

We, as self-aware entities, are the part of the universe that understands itself, and that one simple fact gives us incalculable value. I will never understand the tendency of some people to turn away from the wonders of the physical world into a tiny, feeble make-believe universe that’s a paltry six thousand years old and soon to be rendered obsolete by some invisible man with magic powers who lives up in the sky and spends a great deal of time worrying about what kind of clothes we wear and how we have sex.

The universe is incomprehensibly large and incomprehensibly fine-grained, ancient and mysterious and filled with so much beauty that it’s hard to imagine any person seeing it without being filled with reverence and awe. The more we learn about the physical universe, the more beautiful and magnificent it is. The desire to turn away from understanding the world around us and retreat into an imaginary bestiary of little gods and demons is the desire to turn away from the greatest beauty we can ever hope to bear witness to.

48 thoughts on “The wonder of the physical universe: Naica, Mexico”