Last weekend, gidget23 invited me to go out to the beach and hang with the local goth/industrial crowd.

I’m not much of a beach person, so the internal dialog went something like “-1 for beach, -27 for getting up at 10 AM to make it happen, +10 for meeting the local goth/industrial peeps, +30 for spending time with gidget23, -1 for not knowing where the place is, +2 for iPhone GPS win, -10 for ‘it’s going to be really cold, dress warmly!’…that adds up to a net positive, so what the hell. Sure!”

Little did I know.

You see, Gentle Reader, they do not do beaches here in the Pacific Northwest the way they do beaches in Florida.

The Pacific Northwest is all about rugged natural scenic beauty. It’s a little silly, in fact, just how beautiful this place is. Imagine, if you will, a temperate rainforest that comes right up to the coast, and stops at the sheer cliff face that marks the beginning of the beach, and… 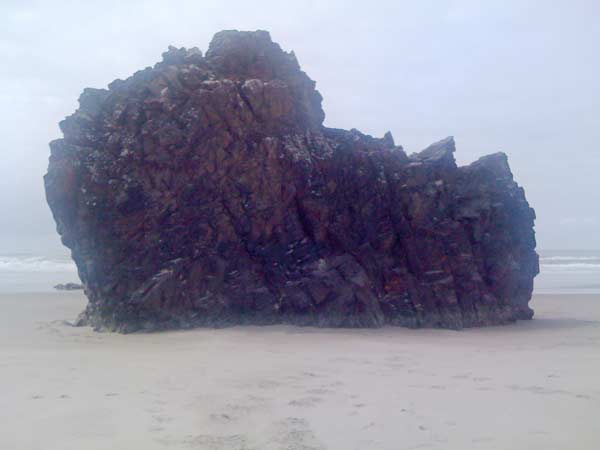 I sadly neglected to bring my real camera, and had to content myself with the camera in my iPhone. The iPhone camera does a pretty good job with even lighting, but struggles hard with unusual or challening lighting conditions, like backlighting.

Anyway, this is a rock. A big-ass volcanic rock just jutting up out of the beach. It’s probably about two and a half or three stories high at the uppermost point, and my god, is it gorgeous. 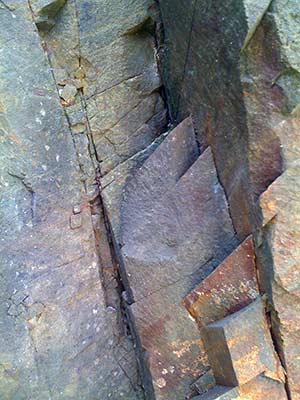 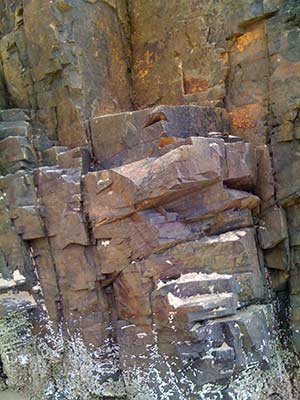 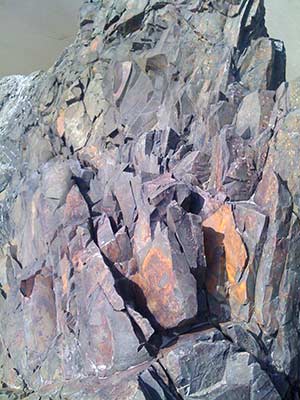 The rock has this really cool planar stress geometry, and fractures in these really interesting cleave patterns. When pieces break off, they’re a bright red rust color inside, which fades to a darker color when it’s exposed. Rich in iron, I reckon.

I hear there’s a big future in iron, though I don’t know why we have to keep changing things all the time. I mean, bronze has been good enough for me, and it was good enough for my father, and this newfangled iron stuff is dangerous and hard to work with, and…

Ahem. Anyway, this chunk of rock is so friggin’ cool that if I had unlimited time, I can see myself dedicating three or four years to learning about geology and chemistry and materials science just so I could understand it better.

And CAVES! Did I mention this beach has caves? 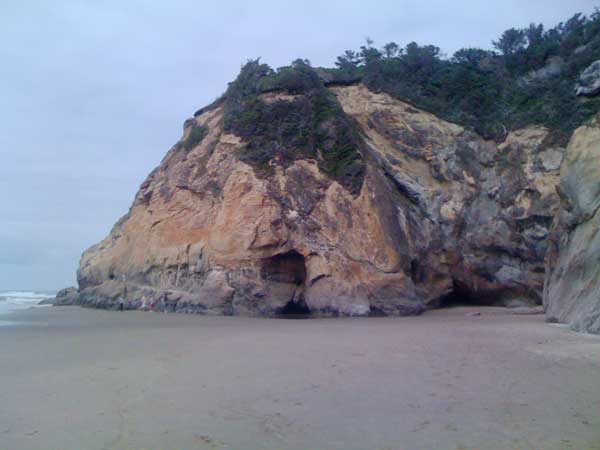 Yes, that’s the entrance to a cave. Not a very big one, but still… Caves! At the beach! How cool is that? 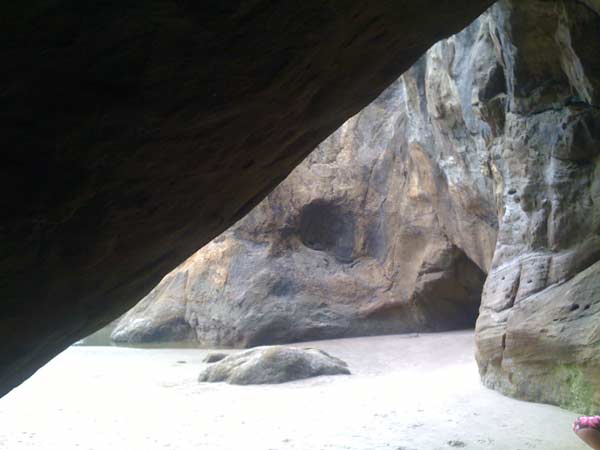 The view from another opening on the other side of the outcropping. This particular cave is underwater at high tide, which is also pretty cool. The 10-year-old me would have been absolutely delighted, dreaming of pirates and lost treasure; the adult me is, if anything, even more delighted.

Caves! At the beach! 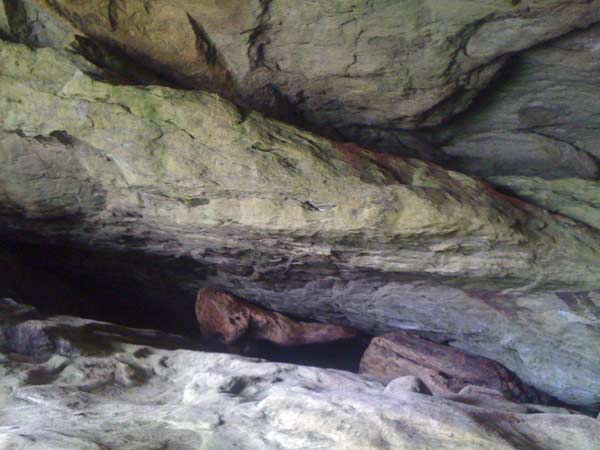 This narrow crevasse fissure opens up into a larger chamber beyond; it was a fairly difficult scrabble, but totally worth it. Too dark to get any pics inside; the iPhone camera has no flash. 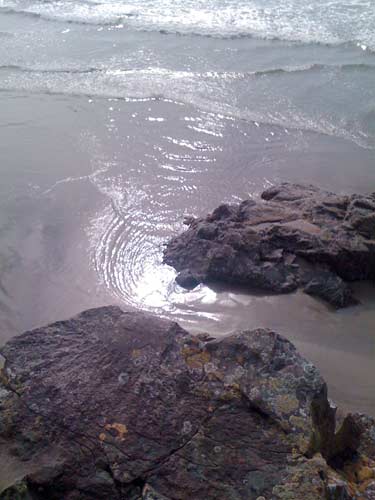 The view looking down from the top of that big chunk of rock. 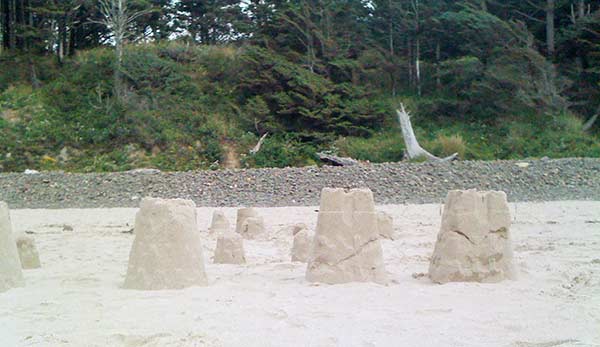 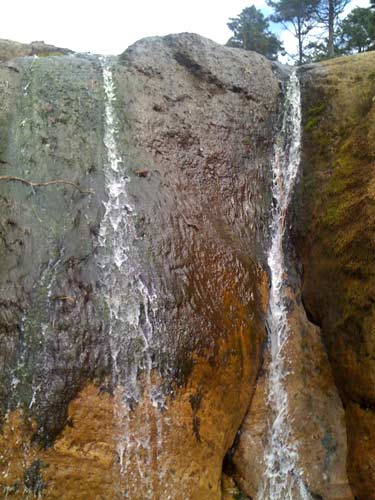 Okay, seriously, a waterfall at the beach? That’s just scenic beauty overkill. At this point, the landscape is just showing off. 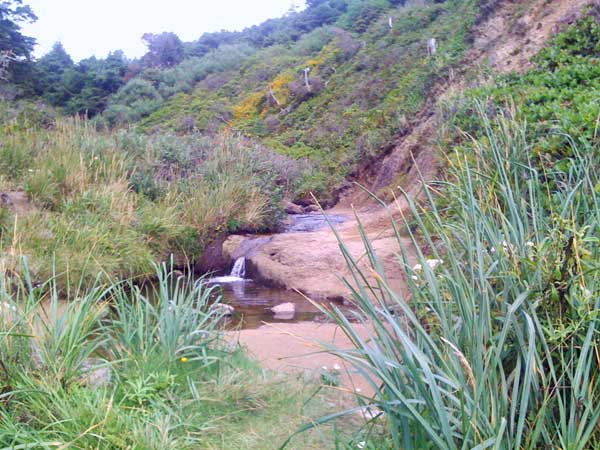 Upstream of the waterfall, and it’s still ridiculously gorgeous.

If I live to be ten thousand years old, I will never stop being awestruck at how awesome life is. One tiny little insignificant speck of a universe vast and magnificent beyond human comprehension, and even that little speck is able to blow my mind with the beauty of the physical universe. How can life ever be anything but a constant celebration of wonder?

I saw a tiny little plant growing up between the stones that tend to litter the base of the cliffs around northwestern beaches, and I just have to say: 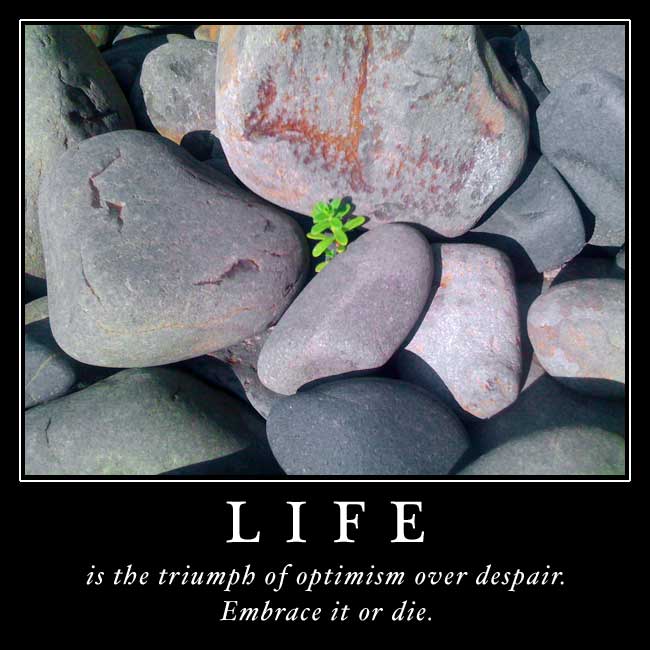