Saturday, my roommate and I went to see the new X-Men movie.

This isn’t a post about that movie, except to say horrible movie was horrible, it’s boringly, tediously predictable, and Rorschach would have dropped him down an elevator shaft.

We got our tickets early, expecting a sell-out crowd (which never materialized; the theater was only about a quarter full), and then spent a little bit of time wandering around the tiny strip mall where the theater is located.

There’s a kitchen and bath shop right next to the theater, and in the showroom they have the most amazing chandelier. And I mean that in the worst possible way. 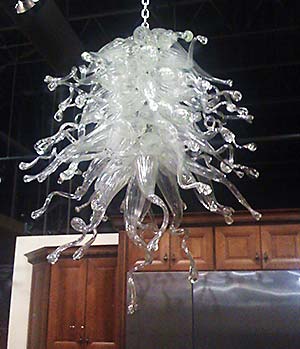 It’s a crappy picture, taken as it was through the window into a darkened store with my iPhone. Still, I think it gets the general idea across.

The chandelier is huge, and is made of an enormous lump of glass with long tentacles coming out of it. And, I want to add, each of those tentacles has a knob on the end of it. An oblong, rounded knob.

I think I want it.

66 thoughts on “I know folks who’d fuck this light”