A couple weeks ago, my friend Jan was in town for a visit. A couple of Fridays ago, we jaunted down to the Waffle House for some waffles before heading to Oakwood Cemetery, about which more later.

On the way to the Waffle House, a cop car flew pas us, lights flashing and siren screaming. Then another. And another.

“Someone’s having a bad day,” I said.

Then another and another. By the time we reached the Waffle House, which is right down the road from where I live, nine cop cars had gone flying past.

So we get to the Waffle House and sit down. Another cop car flies by, then another one.

And then they all turn around and start screaming into the restaurant parking lot, which isn’t the sort of thing you see every day.

About ten seconds later, there were twelve police officers crowded into the Waffle House. Some guy was sitting at the counter, probably wishing he were somewhere else–preferably somewhere where he wasn’t the subject of great interest by a large number of armed men.

So they did the whole “Put your hands on the counter where we can see them” and “Everyone move away from this man” thing, then shortly thereafter led him out in handcuffs. The whole thing was very “Quentin Tarantino goes out for breakfast,” only with fewer fatalities and nobody losing an ear. 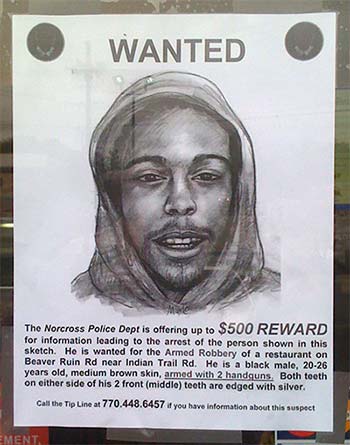 Now, two things strike me about this picture. First, the guy in this sketch most definitely isn’t the guy who got hauled out in handcuffs, which makes me suspect that this guy is that guy’s partner, or this guy had nothing to do with that guy and it’s all some bizarre, Tarantino-esque coincidence, or maybe, just maybe, the cops got the wrong guy on the first go-round.

Second, “Both teeth on either side of his two front (middle) teeth are edged with silver.” That’s a pretty striking characteristic. If one is to make one’s living sticking up restaurants, perhaps one might consider another option, such as not changing one’s appearance in an easily-remembered way that makes one stand out, or maybe one should, I don’t know, wear a hood or something. Seems to me that once they get this guy, the positive ID is going to be a no-brainer.

Might as well tattoo ‘poor impulse control’ on his forehead, really.

12 thoughts on “Strange things are afoot at the Waffle House”