Below a certain age, we hear people say this all the time. Past a certain age, people rarely say it any more. It’s not just because it gets beaten out with the litany of “life’s not fair” that almost always follows “it’s not fair!” (and in truth, I’ve always thought “life’s not fair” is a pretty lame way to follow up a complaint of unfairness anyway); rather, as we get older, and our vision gets longer, we learn that fairness operates best on a global, not a local, scale. Sure, if you did the dishes last night and it’s your sister’s turn to do the dishes tonight, but she isn’t doing the dishes because she just got back from the dentist, it may seem unfair to you from a purely selfish perspective…but really, would you want to trade places with her? And if you were the one who’d just been through the root canal, wouldn’t you appreciate it if you could give the dishes a miss tonight yourself? These things tend to even out in the end; sometimes, compassion dictates that the rigid schedule of dishwashing responsibility should change. 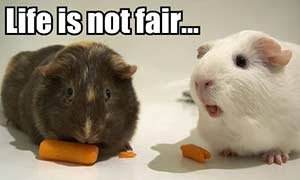 By the time we’re adults, we’ve all pretty much figured this out. That, or we’ve just given in to exhaustion and stopped worrying quite so much about what’s “fair” on such a granular level.

Yet in relationships, and especially in polyamorous relationships, the little whisperings of our five-year-old selves sometimes poke through our consciousness and say “It’s not fair!” when things don’t go the way we expect them to go.

When you’re dealing with human beings, issues of ‘fairness’ sometimes go right out the window. People change, needs change, but often our notions about what is ‘fair’ remain static. Sometimes, our notions of what’s ‘fair’ become so deeply buried that we’re not always even aware of them, or aware of the expectations we carry around with is in regards to what’s fair and what’s not fair.

I’m not even talking about the obvious situations that make people say “It’s not fair!”, such as situations where one person is an extrovert who finds it easy to meet new people and one person’s an introvert who finds it difficult to meet new people, though I’ve certainly heard many folks cry “It’s not fair!” in situations like that. (“It’s not fair that he seems to have prospective partners lining up around the block and I can’t meet anyone!”) It’s certainly true that some folks find it easier to go out and interact with people than other folks do, but that’s something we all have a measure of control over, after all. At the end of te day, wht would be more fair? Forbidding one’s extroverted partner from being an extrovert?

Nor am I talking about situations where a person who is perhaps of a more monogamous bent says of a polyamorous partner, “It’s not fair that she gets to have two lovers and I only have one!” If you want more than one lover, that’s up to you; if you don’t want more than one lover, then it’s hard to cry “unfair” when you’re involved with someone who does; and in the end, it pays to start relationships with people whose goal in relationship is similar to your own.

I’m talking about the “It’s not fair!” monster that’s far more subtle, and wriggles its way deep into the murk of your default, unexamined assumptions and unvoiced expectations.

This sense of fairness can sneak up on you when you don’t really expect it, during times when you feel that you’ve gone above and beyond the call of duty for a relationship partner and you think that either your own efforts aren’t being rewarded the way you expect (even if you might think you don’t have any expectation of reward at all!) or that someone else is somehow benefitting from your work in ways you didn’t expect.

By way of one real-world example, many years ago I met a lovely young woman with whom I became close friends…eventually.

I say “eventually” because when I first met her, she was extremely introverted, had difficulty opening up to others, and had a lot of trouble communicating or trusting folks around her. She was unpartnered at the time, largely because of this. There were a lot of things about her I liked and admired, so I spent a considerable amount of time and effort in getting to know her and encouraging her to open up to me–a nontrivial investment in a relationship with a person who was never even a lover.

Some time later, at least partly because of the experiences she had with me, she found it much easier to talk to people and to extend herself to others, and she ended up finding a boyfriend. Would it have been reasonable for me to be upset, and to say “Hey, look, I put in all the work here, and now someone else gets the benefit?” No, but I do know people who seemed to feel that I should have responded that way.

Another real-world example: Some people I’ve spoken to online were part of a polyamorous triad that included a woman who was facing major upheaval in her life. She’d just come out of a bitter divorce, and was feeling emotionally and financially vulnerable. She needed, and asked for, a great deal of support from her partners, which they offered without question. Later, when she found herself on more solid footing and felt emotionally ready to engage the world again, she began exploring a new relationship, which made her partners feel put out; they felt that since they had supported her through her divorce, they should have some more input in how quickly and to what extent any new partnerships formed.

The common thread in these examples is the idea “I have done something for someone, and I should be the person who benefits from that work.” Or, perhaps more simply, “It’s not fair! Look at what I had to go through to get what I got; why should other people get it more easily? How come I had to do all this work and the next person to come down the pike didn’t?”

And the answer, of course, is “nobody owes you for the experiences that you have had. In fact, you have done something wonderful; you have helped to bring down barriers in someone’s heart, and helped that person find a place where they can now experience the world more fully and engage others in a way that they couldn’t before. Go you!”

In other words, you’ve made a positive difference in someone’s life…and you’re now upset because you feel it’s not fair that other folks get to benefit from that? Well, that’s what happens when you make someone’s life better; the whole world gets just a little bit brighter. Why would anyone want to be stingy about that?

I think, when feelings like this arise (and they do in lots of little ways, all the time), the key thing to keep in mind is this: “Have I done what I did because I expected something in return? Would I go back in time and tell the other person, ‘I will only help you if you give me something I want’?” If the answer is “no,” then let it go.

It’s sneaky, sometimes, how the things we do can come attached to expectations we might not even realize that we have until they’re not met. And it’s important to guard carefully against these unspoken, unacknowledged expectations.

I’m not saying that issues of fairness have no place in relationships, mind you. The fairness that is important in relationships isn’t the tit-for-tat “I did the dishes last night, and we’re supposed to take turns, so it isn’t fair that I have to do them tonight too!” or the “I worked hard to carry Sally through a difficult emotional time, so it should be hard for anyone else to get close to her too!” variety.

In fact, sometimes a tit-for-tat approach to fairness creates a situation that’s decidedly unfair. Another real-world example, which I’ve used before: Many years ago, I knew a married couple that was exploring polyamory. The wife had a girlfriend for many years, but when he finally found a girlfriend, the wife became overwhelmingly, irrationally jealous. After dealing with this jealousy in the typical fashion for a while (you know, passive-aggressive acting out, that sort of thing), she finally went to him and told him, look, I want you to dump your girlfriend. I’ll dump my other partner too, so it’ll be fair.

Three broken hearts for the price of one is a peculiar definition of the word “fair” in my book; which illustrates yet another important point: symmetry is not the same thing as fairness.

Personally, the kind of fairness that really counts is the kind that begins with compassion. Doing the dishes two days in a row because your sister has just had a root canal is compassionate (I’ve had a root canal, and believe me, the last thing you want to be doing when the anaesthetic starts to wear off is standing upright). On the other hand, saying “I’ll dump my partner of many years just to get you to dump yours” is hardly compassionate.

Fairness matters. Symmetry is not the same thing as fairness; fairness means saying things like “I realize that my own insecurity belongs to me, so I will not use it as a blunt instrument on you, nor expect you to plot your life around it. I may, however, ask you to talk to me while I’m dealing with it.”