This is a true story. It’s a tale of sex and sushi and public transportation, of long walks and human determination.

The story is true. The sex part will probably wait ’til another post, but the events portrayed in this tale actually happened. In fact, they happened last night.

I have a roommate, whose name is David, and I have a sweetie who lives in Chicago, whose name (in LJ-land) is dayo. David introduced me to sushi; I introduced David to dayo.

The two of them have been talking muchly of late, and Webcamming until o-god thirty in the morning, and generally having a hell of a time getting to know one another, and their mutual connection is becoming a mutual relationship. Which is very tidy, really, if you ask me.

dayo is in town visiting for the weekend, and we’ve been having a blast. I picked her up from the airport yesterday at a completely unreasonable hour of the morning, and after breakfast and some fooling around of the type forbidden in most Muslim nations, I decided to take a nap, and she and David decided to spend some quality time getting to know one another in person. (One of the reasons I know I’m poly right down to my bones is there’s very little that delights me quite as much as waking up to the sounds of friends and lovers having fun with each other. I would greatly love living in a household with my lovers and their lovers and so on…but I digress.)

Anyway, that’s just the backstory. The tale which I am by degrees approaching is about sushi.

Now, I drive a tiny two-seat car. This car, as I’ve related on many other occasions, really isn’t terribly poly-friendly; in fact, a two-seat car is quite a foolish thing indeed for a poly person to own. I do greatly love my car, though; it’s a Honda del Sol, similar to this one, only white: 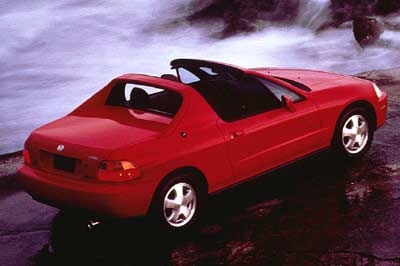 Anyway, since David’s car was totaled by an unlicensed, uninsured driver, this car has been our only means of transportation. Which poses something of a conundrum when we decide to go to sushi. Which we did, last night.

Yesterday was pleasant and cool, there’s a subway stop near (for some value of “near”) to the sushi place, and there’s another subway stop ten minutes from my house, so we had a plan.

At least something as close to a “plan” as I ever have, which is not very close, now that I think about it.

But anyway. Armed with this plan, we set about making a sushi run. I drove David down to the subway stop, turned around and came back home, then drove dayo down to the subway stop. Now, observant readers reasonably skilled in elementary arithmetic will already have seen one flaw, which is that this left David sitting at the subway station for nearly half an hour. A ten-minute trip becomes a twenty-minute wait when you consider the time spent driving back and then returning–and due to certain peculiarities involving space-time, twenty minutes in a subway station is a lot more than twenty minutes spent anywhere else save a dentist’s office or an insurance seminar. And there’s little to do in a subway station; read the warning signs posted on the walls, look at the ads plastered on every flat surface, plot the invasion of France, that’s really about it.

From there our train ride to the Atlanta Civic Center subway stop was fast and effortless, remarkable only for the odd looks of fellow passengers when they saw dayo holding hands with David and I, as if they’d never seen someone holding hands before, I dunno.

We realized the error when the GPS built into the iPhone, without which I would probably not be here right now to relate this tale, informed us through the magic of Google Maps that we were five miles from our destination. This engendered a certain degree of confusion, made all the worse by the fact that the Atlanta transit Web site doesn’t actually appear to have te correct address for all the subway stops.

dayo handles logistics and transportation for a living. If you’re ever lost, let the logistics person sort it out. Just sayin’.

Back onto the subway for a ride to the correct stop, then a walk (1.9 miles, according to the iPhone) to Sushi House.

Sushi House arrived on the horizon like the golden dawn of a new day after a long night of trials and tribulations in the desert.

Okay, so that’s a lie. Sushi House is in a strip mall behind a gas station, and you can’t even see it ’til you’re on top of it. But the gas station arrived on the horizon like the golden dawn of a new day after a long night of trials and tribulations in the desert.

And they were open, something we hadn’t thought to verify before setting out.

And just as the added touch, the cherry atop the sundae of awesome with extra awesomesauce, I have a crush on one of the people who works there.

By this time, five hours had passed since the start of the entire escapade, and the prospect of an additional five hours ‘twixt us and returning home to the Monkey Rocker was too much to bear, so we cheated mightily and called a cab.

Which is a lot less interesting in the telling than the trip to the sushi was.

Our return home is the point at which the story takes a turn toward the kinky sex, so I shall wrap this up here and take a small bow. The second part of the tale is here, and as you may imagine, is profoundly not safe for work.

32 thoughts on “Polyamorous sushi and a monogamous car”