So I just got back from lunch at Schlotzsky’s. If you’re not familiar with it, it’s a deli chain–they make sandwiches and pizzas on sourdough crust, that kind of thing. Very tasty. I don’t eat there nearly often enough.

Anyway, the Schlotzsky’s near my office has a huge mural on the wall over the cash registers, which pretty much dominates the internal decor. It’s quite a piece of work, though I’m not sure if that’s a good thing or a bad thing.

The style of the piece might best be described as “Stalin-era Soviet Russia mets American Dustbowl.” I apologize for the quality of these snaps; I took ’em on my camera phone. The more I look at this mural, the weirder it gets. 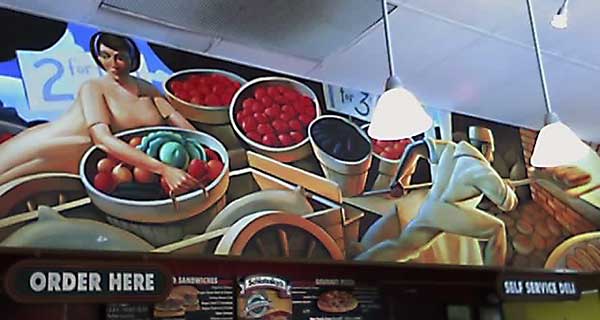 It has that kind of flat color scheme and weird perspective of the old Cold War-era Soviet propaganda, but with a few odd little twists that just kind of make my head go all asplodey-like. Take the woman selling vegetables, for example: 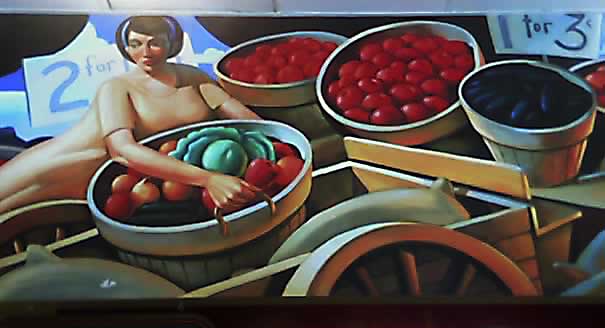 Doesn’t look too happy, does she?

“Things just haven’t been the same since my husband died of gout. That was in…let’s see, must have been the summer of ’02 or ’03. I’ve been chipping out a life for myself since then by selling vegetables I raise out back behind the shed, and turning tricks in town for fifty cents. Most times, the only thing that gets me through the day is quiet thoughts of suicide. My husband left a .12-gauge in the shed; it’s a little rusty, but it might still do the job. But then, who would feed the kids? Screaming little brats they are, and they eat me out of house and home. I could give them to my sister, before I do the deed, but you know, she just hasn’t been the same since Bobby went to jail. What? Oh, yes, three cents.”

Now the baker, on the other hand: 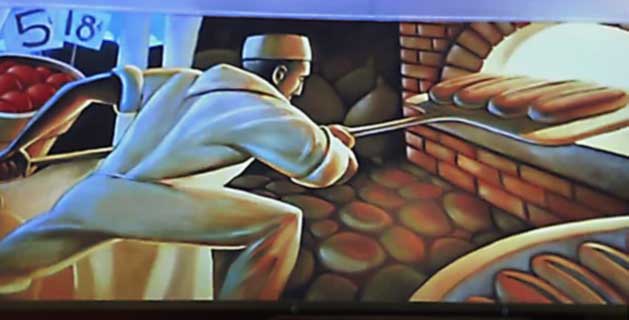 “I bake bread! Good bread, for strong people! My bread feeds workers in glorious Worker’s Paradise! Much bread, for day of Soviet triumph!”

Except that, y’know, his eyes are closed. He still sees images of his father, up against the wall, cut down in a hail of gunfire after the Revolution. But it had to be done; all the bourgeoise stock brokers getting fat off the backs of the proletariat needed to be swept aside to give way for glorious worker’s paradise. He still remembers the family mansion in the country, and when he returns home every evening to his cubicle in worker’s dormitory #137, he stares at the blank wall and sobs…

24 thoughts on “In Soviet Russia, bread bakes YOU!”