The American Republican party portrays itself as the party of law and order, the party that supports the police, the party that understands the thin blue line that stands between anarchy and chaos. “Vote for us! We stand against the anarchy of the liberals!”

Yet when we look at right-wing media these last few weeks, we see the forces of American conservatism, the “law and order” party, blasting the Capitol police who stood against the rioters and insurrectionists on January 6. Night after night, millions of Americans tune in to watch right-wing talking heads vilifying the police for hours at a stretch.

What gives? How can this be? Isn’t this the rankest, vilest sort of hypocrisy, so blatant that even the strongest partisan must be appalled to see it?

No. I don’t think so. What we’re seeing is something else, and within the context of the alt-right, their behavior makes a warped sort of sense. 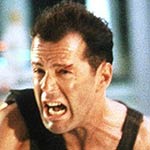 To understand what is happening now, and why the American right doesn’t consider their vilification of the Capitol police hypocritical, I think we need to understand John McClane, the Hero’s Journey, Rugged Individualism, the American monomyth, and authoritarianism. Those are the ingredients that make up that particular toxic brew.

Many people, especially those who lean toward social hierarchy, want to see the police as the classic hero, waging epic battle against the forces of evil like John McClane in Die Hard. Free of the entangling bureaucracy of a stifling and incompetent bureaucracy, they can take the fight directly to the baddies.

This whole concept of heroism is deeply, deeply steeped in rugged individualism. The hero engages in single combat with the forces of darkness. The hero stands or falls on his own. The hero depends on his own resources and wit. Think about all the classic hero tropes: the sheriff from out of town in spaghetti westerns who rides in to save the townspeople unable to save themselves, Arnold Schwarzenegger going toe to toe with the predator in some far off jungle, everything about Batman…in their role as hero, they transcend the normal rules to fight on their own, self-reliant and solely responsible for deciding the rules of engagement.

We (meaning Smericans and those influenced by American culture) are steeped in this idea of heroism and the Rugged Individual because it’s woven deep into the American monomyth, and has been since the days before the United States was the United States. John Galt is a clumsy, badly-written, lowbrow-posing-as-highbrow interpretation of the American monomyth, created by an American immigrant as an unironic (but still unintentionally funny) expression of all Ayn Rand believed was good and strong in the American character.

When American conservatives refer to police as “heroes,” they don’t mean “people who work for the community.” They mean something quite different: the archetype of the Campbell hero, the hero of a Hollywood big-budget action flick, Arnold going after the Predator. That kind of hero doesn’t obey the rules. They mean “hero” in a very specific and literal sense.

In fact, it’s insulting to think that kind of hero even should follow the rules. Rules are for the weak, for those who don’t have what it takes to be heroes. That kind of hero understands what needs to be done and is willing to do whatever it takes to git er done.

That mentality of police relies on the idea that police are the heroes keeping the forces of evil at bay. They protect our freedoms from the Other, and our sacred freedoms must be defended through strict order and harsh justice.

It’s why American conservatives can say they support our men in blue and fly thin blue line flags, then turn around and ridicule, attack, and condemn the Capitol police who fought against the insurrectionists. To reasonable people, that looks like hypocrisy. To the people who do it, it’s not. Those police weren’t heroes. Those polce stood against the heroes, against the people who went outside the system to right an “injustice” and git er done.

It’s also why they celebrate police who kill unarmed Black people. There’s a deep element of racism writ in this mindset. The police went outside the system to confront the Other, the enemy within us who is not of us, the people who don’t obey the rules, who don’t know their place.

Seen in this light, it’s the Capitol police, not the insurrectionists, who broke the social contract. They aren’t the heroes of this story. By acting against the heroes, they deserve condemnation.

As weird as this mindset might seem, it’s what a lot of conservatives truly to believe, and it’s why pointing out the apparent hypocrisy of flying a “thin blue line” flag whilst throwing the Capitol police under the bus won’t gain any traction among the American right.