We’ve made a lot of progress in the last few months, starting with setting up a workspace for research, development, and testing. We’ve moved into the new space, where we have a lot of resources we didn’t have before.

The first few prototypes were put together by modifying existing sex toys. This crude approach was good enough to show us that the basic technology is sound, but the prototypes we built this way were limited, fragile, and rather uncomfortable to wear.

Since then, we’ve acquired a 3D printer and facilities for making ceramic molds to cast silicone. This allows us to create custom-designed silicone with electronics, sensors, and electrodes cast right in.

From 3D rendering to printed positive that we use to make a mold.
And yes, those are Lego bricks we’re using as a mold box! 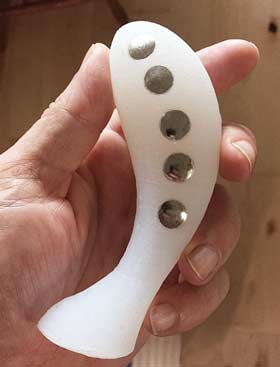 Right now, we’re moving into a development phase aimed at answering questions like:

The first-generation prototype had three sensors and three electrodes, and the insertable part was rigid plastic, which as you can imagine was not terribly comfortable and certainly not workable for long-term use. The prototype we’re working on now is an enormous improvement: fifteen sensors and fifteen electrodes, embedded in custom silicone that’s far more comfortable.

We’re excited with the progress that we’ve made, and looking forward to what we can learn in 2017.