One of the stops on the More Than Two book tour took us to Paonia, Colorado, a remote town of about 1,500 people in the foothills of the Rocky Mountains. We got there late at night, after traveling along windy mountain roads in the dark and very nearly hitting both a bear and a deer, each of whom had for some reason unknown to your humble narrator chosen to amble out in the middle of the road and just kind of sit there.

We spent some time exploring the town before our book event, and happened upon a small park more or less in the middle of town. While we were walking through the park, I caught the eye of a young calico cat who was trotting across the street some distance away, doing whatever it is cats do in Paonia, Colorado.

The cat decided she wanted to make friends, and immediately came running over to us, where she threw herself into my arms with some gusto.

After some petting and playing with, she decided she wanted Eve’s attention, too. 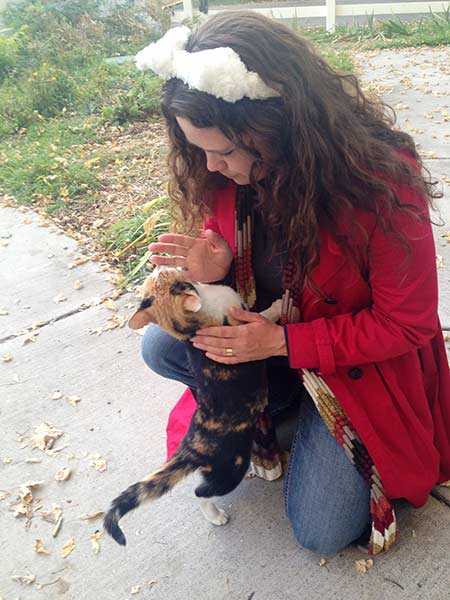 We met many cats on the book tour, but this adorable little calico is the one I remember the most. She was incredibly friendly (and I say this as a guy who owns Tonkinese kittens, animals known worldwide for how strongly they bond to their people), but also had some of the signs that somebody somewhere was mistreating her. She was hypervigilant, and took off at the slightest sign that anyone else was walking toward us.

I sincerely hope nobody was being mean to her. There’s a special place in hell for humans who abuse animals. I wonder about this kitten often, and hope that, wherever she is, she is happy and warm.