Earlier his week, Oregon rejected a measure to label GMO food by a paper-thin margin. A similar measure was rejected by Colorado voters, by a much wider margin. 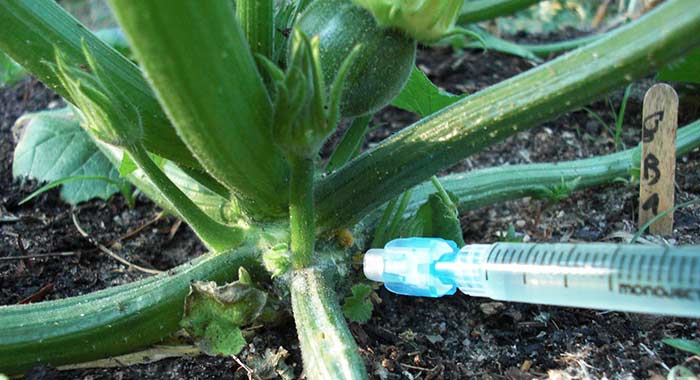 When people hear “GMO,” this is often the kind of image they have in their heads–someone injecting plants with foreign materials to alter them. It’s a vivid image, that brings up all kinds of uneasy emotions and questions about food purity and safety. We will get back to this picture in a minute.

When I talk to folks about GMO food, I hear a lot of different reasons why people don’t like them. Some of these reasons have to do with fear of the food itself–is it safe? Does it cause tumors? Is it natural? Is it poisonous? Does it create ‘superweed’? Some of them have to do with concerns over companies that make it: are they ethical? Do they control too much of the food market? Are they abusing farmers? Some of it has to do with society: Is it right to patent foods? Does it take freedom away from farmers? Does it encourage poverty in Third World countries? And some of it is just…well, loopy. Did Ebola come from GMO food? Is GMO food a conspiracy to control the world population? Are scientists trying to eliminate people in Third World countries? (Don’t laugh; those last ones are actual arguments people sincerely seem to believe.)

I tend to categorize the arguments I hear against GMOs into four broad categories: “because health,” “because patents,” “because Monsanto,” and “because garwharbl something something Ebola”. The last category is kind of the third rail of GMO discussion; a person who believes that Ebola, a disease first characterized in 1976, four years before the first experimental transgenic DNA modification was successful and eleven years before the first engineered produce was developed, came from GMO food without the use of a time machine isn’t someone who will be reached by discussion.

What I would like to do is a series of blog posts addressing the “because health,” “because patents,” and “because Monsanto” arguments.

But first, let’s talk about what GMOs are, because it’s helpful to know that before we can talk about them.

I’ve asked this question of a lot of people. Sadly, I’ve found very few people who can answer it. Here are some of the answers I’ve heard:

Consumers Union, the parent company of Consumer Reports magazine, says Genetically modified organisms are created by deliberately changing the genetic makeup of a plant or animal in ways that could never occur in nature. And Whole Foods has this up on the wall:

There’s just one problem. All these definitions are wrong.

GMO stands for “genetically modified organism.” A GMO is any organism–plant, animal, bacterium, fungus, yeast, whatever–that has been modified by genetic engineering techniques. There are lots of these techniques, and lots of ways to modify an organism. Some GMOs have new genes added; some do not (for example, some GMO techniques involve either silencing or removing a gene). New genes can be placed into a cell in a number of different ways.

The point is, when people focus on things like “GMOs are organisms that have genes from another species introduced into them,” like Whole Foods does, they don’t know that’s only one type of GMO. It’s like saying “clothing is a small, closed, tube-shaped piece of fabric worn on the foot under a shoe.” No, that’s one type of clothing–there are many others.

Similarly, when people talk about modification “that can never happen in nature,” like Consumers Union does, that’s incorrect. Many kinds of mutation can and do happen in nature. Organisms experience changes in their DNA all the time. You are a mutant; there are somewhere around 100 to 160 differences between your DNA and your parents’. It is completely possible for a change introduced by genetic engineering to happen by random chance in nature.

An important thing to remember here is there is no such thing as ‘fish’ DNA or ‘human’ DNA or ‘corn’ DNA. DNA is just sequences of molecules called nucleotides. DNA is made up of very, very, very long strings of the nucleotides adenine, cytosine, guanine, and thymine, which are represented by the letters A, C, G, and T. When someone “sequences” DNA, they’re reading these long long lists of nucleotides. A bit of sequenced DNA might look like AAGATACAGGTACGTTATTACGTCA. Now, looking at that: is that human, mouse, virus, or pig DNA?

If you see a particular sequence of DNA in a tomato and you copy it into corn, have you put “tomato genes” into the corn? All organisms on this planet share a common genetic heritage. There are stretches of DNA in you that are also in chimpanzees, mice, and carrots. Are those bits of DNA human genes? Or are they mouse genes? Or are they carrot genes? They are just strings of nucleotides, there’s nothing special about them that makes them “belong” to one organism or another. If you rearrange the toy blocks you made your castle out of into a spaceship, you’re not putting “castle blocks” into your spaceship.

All your food is modified

It’s normal for people to fear new things. When pasteurization of milk was first invented, people were terrified of it. A lot of folks complained that it was dangerous to drink the “corpses of dead bacteria.” (Dead bacteria aren’t a problem–it’s the live ones that can harm you.) And the same thing is true of GMOs; we are easily frightened of new things.

But we’ve been modifying food since the beginning of time. A lot of folks think hybridization is different (even when it’s cross-species hybridization, which was the first technology we used to put DNA from one organism into another organism).

During the Green Revolution, which started in the 1940s, we began making huge changes to plant DNA. But we did it at random. We would expose plant seeds to high levels of radiation or soak them in mutagenic chemicals, which would cause thousands of random changes to their DNA. Then we would grow the seeds and see if any of the plants had useful characteristics. Then we’d repeat the process, using more radiation or mutagenic chemicals to do more random changes to DNA, and continue looking for useful traits. If we found them, we would back-cross these mutated plants with regular stock, trying to get the mutations we liked to breed true.

You’ve been eating food with modified DNA your entire life. Even the “organic” food you eat has probably been modified this way. The difference between that kind of modification and GMO technology is that the old way changes thousands or tens of thousands of genes totally at random, without anyone knowing how the plant will be affected, while GMO technology changes one or a few genes in very precise ways that we understand and can predict. Remember, the things changed at random by radiation or mutagenic chemicals are not GMOs.

Kevin Folta has put together this table that shows how we modify plant DNA, how many modifications the techniques cause, and what those modifications are (click to embiggen):

Now, about the picture at the top of this essay. Is that what you think of when you think “GMO”? Actually, it’s a photo of organic squash being cultivated.

Yes, organic. The squash vine is being injected with a natural pesticide called Bt, which kills insects. Bt is one of the many pesticides used in organic farming.

Many folks believe that “natural” pesticides are less harmful to humans than “synthetic” ones, on the hypothesis that natural is good and artificial is bad. (This notion conveniently forgets that cyanide, deadly nightshade, smallpox, and arsenic are all 100% natural.) It’s not necessarily true. One of the advantages of GMO farming is we can use pesticides and herbicides that are extremely targeted; Roundup, for example, is highly effective against plants because it interferes with photosynthesis. Humans don’t do photosynthesis, so it’s pretty harmless to us–way less toxic than caffeine, and slightly less toxic than baking soda.

Now that I’ve written a little background about what GMOs are (and touched on what organic food is not), in the next section I’ll start talking about specific objections to GMO technology.