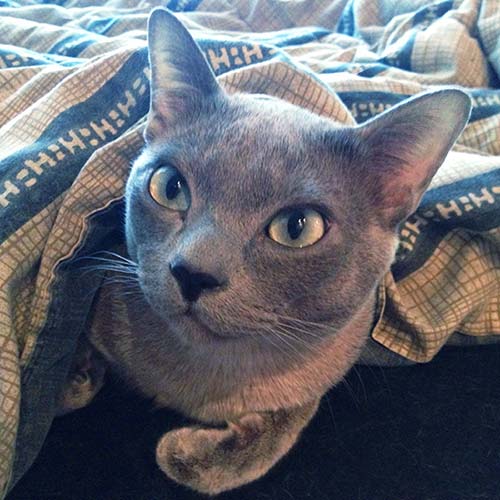 Beryl is a solid blue Tonkinese cat. He shares a home with (I would say he belongs to, but the reverse may be true) zaiah and I, and spends a good deal of each day perched on my shoulder. I write from home, and whenever I’m writing, there’s a pretty good chance he’s on my shoulder, nuzzling my ear and purring.

He’s a sweetheart–one of the sweetest cats I’ve ever known, and believe me when I say I’ve known a lot of cats.

Whenever we’re in the bedroom, Beryl likes to sit on a pillow atop the tall set of shelves we have on the wall next to the bed. It didn’t take him long to learn that the bed is soft, so rather than climbing down off the top of the shelves, he will often simply leap, legs all outstretched like a flying squirrel’s, onto the bed.

Now, if I wanted to, I could get a sheet of plywood, put it on top of the bed, then put the blanket over top of it. That way, when Beryl leapt off the shelves, he’d be quite astonished to have his worldview abruptly and unpleasantly upended.

That brings us to God.

This is a fossil.

More specifically, it’s a fossil of Macrocranion tupaiodon, an extinct early mammal that lived somewhere between 56 and 34 million years ago and went extinct during the Eocene–Oligocene extinction event.

Now, there are very, very few things in this world that conservative Orthodox Jews, Fundamentalist Muslims, and Evangelical Christians will agree on, but one thing that some of these folks do have in common is the notion that fossils like this one do not actually represent the remains of long-vanished animals, because the world is much younger than what such fossils suggest. Most conservative Muslims are more reasonable on this point than their other Abrahamic fellows, though apparently the notion of an earth only a few thousand years old is beginning to take hold in some parts of the Islamic ideosphere.

That presents a challenge; if the world is very young, whence the fossils? And one of the many explanations put forth to answer the conundrum is the idea that these fossils were placed by a trickster God (or, in some versions of the story, allowed by God to be placed by the devil) for the purpose of testing our faith.

And this, I find profoundly weird.

The one other thing all these various religious traditions agree on is God loves us* (*some exclusions and limitations apply; offer valid only for certain select groups and/or certain types of people; offer void for heretics, unbelievers, heathens, idolators, infidels, skeptics, blasphemers, or the faithless).

And I can’t quite wrap my head around the notion of deliberately playing this sort of trick on the folks one loves.

Yes, I could put a sheet of plywood on my bed and cover it with a blanket. But to what possible end? I fear I lack the ability to rightly apprehend what kind of love that would show to my cat.

Which leads me to the inescapable conclusion that a god that would deliberately plant, or allow to be planted, fake evidence contradicting the approved account of creation would be a god that loved mankind rather less than I love my cat.

It seems axiomic to me that loving someone means having their interests and their happiness at heart. Apparently, however, the believers have a rather more unorthodox idea of love. And that is why, I think, one should perhaps not trust this variety of believer who says “I love you.” Invite such a person for dinner, but count the silverware after.

18 thoughts on “What my cat teaches me about divine love”