I watched District 9. I liked District 9. When I heard that the guy who made District 9 was doing another movie, this time about the enormous class divide in modern American society, and that it had a space station and explosions and stuff on it, I was as excited as a hyperactive kid on a cotton candy sugar high.

Perhaps not Prometheus levels of excited, but excited nonetheless.

And, unlike Prometheus, Elysium didn’t disappoint. It was exactly what I expected it to be after seeing District 9: gorgeous, brutal, sprawling, epic, and nasty. Very, very nasty. 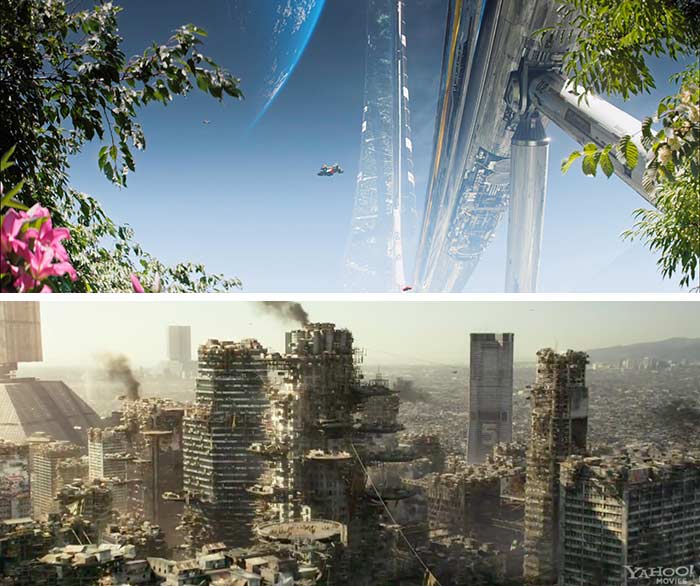 The richest of the rich, the top wealthiest of society, have abandoned Earth altogether in favor of a lovely space station called Elysium, where affordable housing starts at just $250,000,000. The people stuck on Earth, the poorest 99% of society, are mired in sprawling poverty.

MATT DAMON: I have to go to work.
MATT DAMON’S SIDEKICK: Dude, why on earth are you going to work? We should steal cars or something.
MATT DAMON: If you are willing to work hard, you can better your life, improve your situation, and become rich.
MATT DAMON’S SIDEKICK: …
MATT DAMON’S SIDEKICK: Are you on crack? Have you actually looked around?
DONALD TRUMP: Seems legit. Hard work, plus marrying a millionaire and declaring bankruptcy, like, seven times, totally worked for me. And going two billion dollars into debt. And having a bad toupee. You need a bad toupee.
ROBOT POLICE OFFICER: Matt Damon, what are you doing?
MATT DAMON: Waiting for the bus.
ROBOT POLICE OFFICER: Your insubordination will not go unpunished. We will beat you now.

MATT DAMON: My arm is broken. I need a cast…hey! My childhood love interest! I haven’t seen you since the beginning of the movie!
LOVE INTEREST: I’m a nurse now. Down here, we have crap hospitals, crap equipment, and crap supplies. Up there, they have high-tech autodocs that can fix anything, stop aging, and basically make people live forever. Too bad you’re not rich enough to be up there.
TEA PARTY: That’s because he’s a taker, not a maker! If you want health care that doesn’t suck, you should have been born rich, moron.

EVIL JODIE FOSTER: Thank you for coming to my party of super-rich white assholes. You will notice I’m wearing a twenty-thousand-dollar dress. Life is awesome. Have some champagne!
SUPER-RICH WHITE ASSHOLE: Life is amazing.
EVIL JODIE FOSTER: Yes, it’s wonderful to live in a post-scarcity society.
SUPER-RICH WHITE ASSHOLE: Well, is it technically a post-scarcity society, since our wealth is built off the backs of billions of poor people?
EVIL JODIE FOSTER: Of course it is! Don’t think of them as billions of poor people. Think of them as…a giant collective Mechanical Turk that takes care of all our needs.
INTERNET LIBERTARIANS: Seems legit. 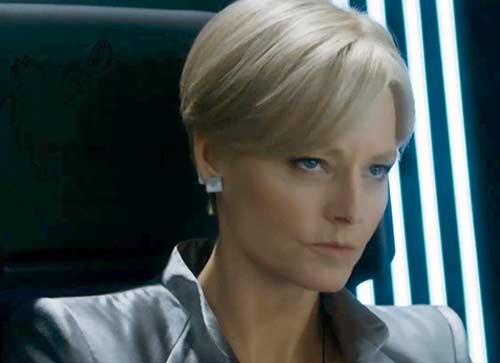 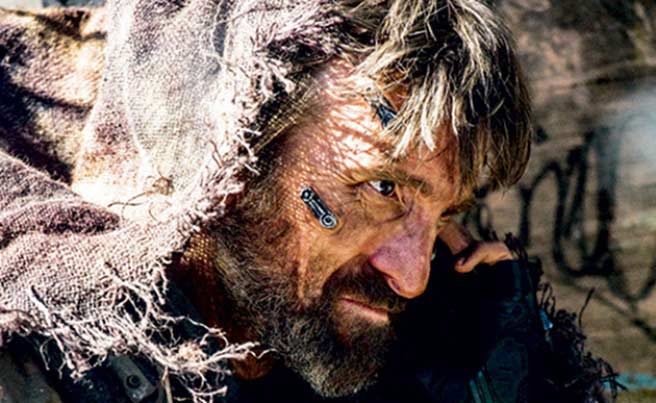 EVIL JODIE FOSTER: Arrest those people and deport them back to Earth.
TEA PARTY: Yeah! You tell ’em, Evil Jodie Foster! If they want health care, they should have been born rich! Boot those takers right back to earth!
ELYSIUM PRESIDENT: Evil Jodie Foster, you just killed a bunch of people and you employed a mercenary whose hobbies include macrame, torturing people, raping women, and gouging the eyes out of small children. What the actual fuck?
EVIL JODIE FOSTER: I am securing our homeland! You wouldn’t like it if poor people came into your house and tried to use your autodoc to cure their terminal illnesses! I am simply looking out for those of us who have worked hard to build better homes for ourselves and our children! If those people want health care, they should have been born rich!
ELYSIUM PRESIDENT: …
ELYSIUM PRESIDENT: Wow, you really did drink the Kool-Aide, didn’t you?
ELYSIUM PRESIDENT: Just for the record, killing poor people is morally questionable. 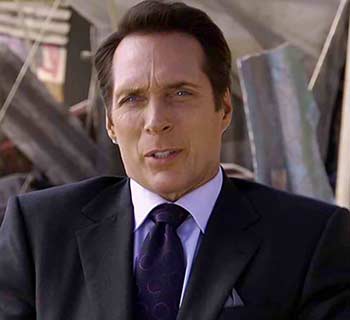 MATT DAMON gets blasted with RADIATION

RESCUE ROBOT: You have been blasted with radiation. You can be cured with just the touch of a button for no cost. If you are rich. Ha! Ha! You are not rich, so you’re going to die. Taker.
MATT DAMON: …
RESCUE ROBOT: Sign this liability waiver if you want any painkillers.

MATT DAMON signs a WAIVER and gets a bottle of PAINKILLERS

MATT DAMON: Hey, Spider, you’re a crime boss who sells tickets on illegal shuttles that try to sneak into Elysium. I am going to die in a few days if I don’t go there. What do you say?
SPIDER: Give me money.
MATT DAMON: …
MATT DAMON: If I had any fucking money I wouldn’t be in this jam!
SPIDER: I want to rob a rich corporate dude. They store software in implants in their brains. How about we put an implant in your brain and you go rob a rich corporate dude and steal his data.
MATT DAMON: Eww! There’s still hair on that implant! Where did you get…
MATT DAMON: …never mind. Dude, I’m dying of radiation poisoning. How the hell am I supposed to mug a rich corporate dude?
SPIDER: I have a surplus Russian-issue powered exoskeleton! We just cut holes in all your bones, see, and bolt these things on, and then drill a hole in your skull and plant these electrodes in your brain, see, and…
MATT DAMON: Let me get this straight. You want to implant that data recorder in my brain so I can use it to steal data from a rich corporate dude, and you want to bolt a Russian surplus exoskeleton onto my body because I’m dying of radiation poisoning and I’m not strong enough to steal data from a rich corporate dude?
SPIDER: Yeah! I have a doc who works for me, and he might even stop smoking while he’s doing the surgery!
MATT DAMON: Okay. 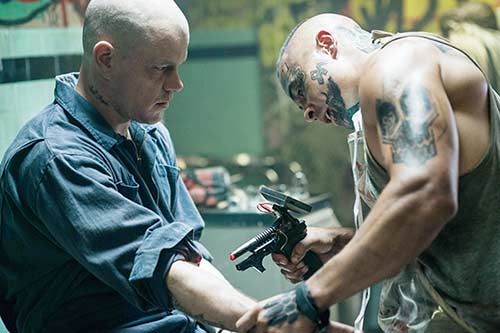 MERCENARY: I have a heavily armed and armored military attack spacecraft with infrared and heat-sensing automated missiles and machine guns and railguns and stuff, but I’m going to kill your sidekick with a sword. You know why?
RUSSIAN CYBORG MATT DAMON: Why?
MERCENARY: Because it’s more FUN.

MERCENARY: Hey Love Interest, I like punching you in the face. I’m going to kidnap you. And your dying daughter.
LOVE INTEREST: …
MERCENARY: I never have had very much luck with women. Maybe because I just never settled down. Or maybe because it’s more fun to rape and kill them, I don’t know. But I totally think I could settle down with you.
LOVE INTEREST: …
MERCENARY: You know, for some value of “settle down” that means “rape and kill.” 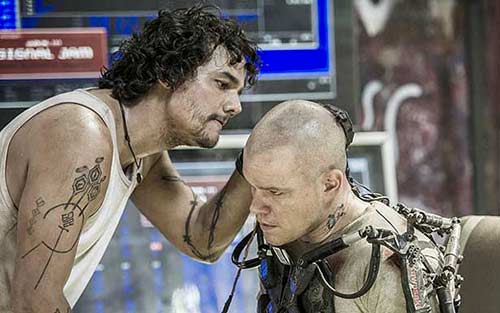 EVIL JODIE FOSTER: Well, this is a mess. I hate it when a coup goes wrong.

EVIL JODIE FOSTER: Listen, I know you’re a baby-killing rapist and all, but I gotta say, man, you totally screwed the pooch back there.
MERCENARY: …

LOVE INTEREST: An autodoc! I can save my daughter!
AUTODOC: Access denied. You are a poor person. If you wanted health care, you should have been born a rich person. Taker.
TEA PARTY: Damn straight!

SPIDER: While they’re preoccupied, let’s take another illegal shuttle up to Elysium.
HENCHMAN: Why?
SPIDER: Well, we aren’t going to get blown up, shot at, or stabbed down here, right?

NON-SURPLUS MODERN CYBORG MERCENARY: If you want to save your girlfriend’s daughter or yourself, you have to get through me.
RUSSIAN CYBORG MATT DAMON: Okay.

BOINGBOING MOVIE REVIEWER: This movie sucks.
BOINGBOING MOVIE REVIEWER: Movie violence is a spreading disease on culture. Elysium, for all its purported good intentions … the film is so thickly mired in gunfire, torture, and bloodshed that social issues are forgotten, scattered like spent shells on a dusty dystopian floor. These kinds of films aren’t entertaining anymore; they’re offensive.
NEILL BLOMKAMP: Oh, Jesus Fuckmuppet Christ on a nuclear-powered pogo stick.
NEILL BLOMKAMP: You live in a society that has the highest per capita rates of homicide in the industrialized world, fueled in large part by widespread poverty, joblessness, low wages, and stress.
NEILL BLOMKAMP: You have a sprawling, out-of-control prison-industrial complex that incarcerates a higher percentage of its citizens than any other nation on earth, including such shining gems of humanitarian civility as China and North Korea.
NEILL BLOMKAMP: You have a government controlled by corporations, an economy destroyed by intentional malfeasance and ruinously expensive wars, a culture steeped in reactionary anti-intellectual ideology, and a crumbling infrastructure that would embarrass a lot of Third World tin-pot despots.
NEILL BLOMKAMP: You have an entire generation that’s given three choices in life: be saddled with crippling student debt, join the military so that you can come back–IF you come back–and end up homeless, or go directly from high school to prison without passing “go” or collecting…well, any money at all.
NEILL BLOMKAMP: And movie violence is a spreading disease on culture?
NEILL BLOMKAMP: People pretending to shoot each other with fake guns?
NEILL BLOMKAMP: That’s the problem with modern culture?
NEILL BLOMKAMP: Wow. Just…wow.
NEILL BLOMKAMP: Sit the fuck down, shut the fuck up, and finish watching my movie.
NEILL BLOMKAMP: Or you know what? Don’t. I don’t even care any more.
NEILL BLOMKAMP: Jesus. You people.
NEILL BLOMKAMP: See, this is why when I became rich and influential and could do whatever the hell I wanted, I moved to Canada, not Los Angeles.
NEILL BLOMKAMP: Fuckmuppets.

RUSSIAN CYBORG MATT DAMON: So now what?
SPIDER: I rewrote the code so that Elysium’s central computer system will recognize everyone, including poor people, as citizens, and everyone will have access to medical treatment.
DONALD TRUMP: NOOOOOOOOO!
DONALD TRUMP: What the fuck is wrong with you? You can’t have poor people getting health care! That’s…that’s insane! Society will collapse!
TEA PARTY: Yeah! What he said!
INTERNET LIBERTARIANS: Yeah! As Ayn Rand clearly explained on page 684 of the extended version of Atlas Shrugged, if poor people get health care, it is doom for us all!
SPIDER: There’s just one catch. Running it will kill you.
RUSSIAN CYBORG MATT DAMON: Wait, what? Why?
SPIDER: Because of plot. And reasons. But relax! You’re about to die anyway.
RUSSIAN CYBORG MATT DAMON: Oh, right, that’s a help. Thanks for that.