J J Abrams, the visionary director who brought you such cinematic masterpieces as Jimmy Kimmel Live! and Star Trek: A New Hope Reboot, returns to his director’s seat for Star Trek: Into Plot Holes. 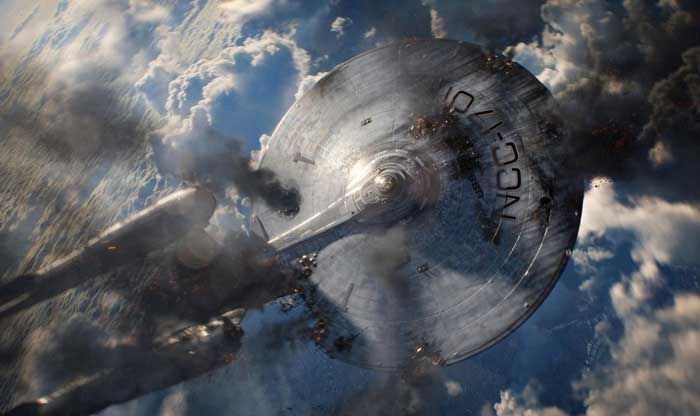 CAPTAIN JAMES T. KIRK and BONES are RUNNING ACROSS A FIELD OF WEIRD RED TREES being CHASED BY PRIMITIVE ALIENS

CAPTAIN JAMES T. KIRK and BONES swim down to the ENTERPRISE, which for some reason is hiding UNDERWATER

SCOTTY: This is ridiculous.
Audience: We'll say! Just because a spaceship is airtight doesn't mean it works underwater. I mean, for one, it uses reaction thrusters, which we will be able to see in a later scene. Don't they get full of water? I mean, what do we think would happen if, say, the Space Shuttle fired off its engines underwater? A bloody great mess, I'd reckon.

They lower SPOCK into the VOLCANO with the MAGIC VOLCANO-STOPPING BOMB. Things go HORRIBLY WRONG. 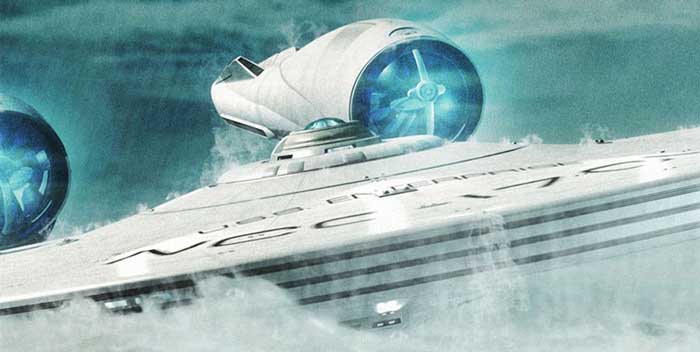 The ENTERPRISE flies back to STARFLEET

MICKEY from DR. WHO receives BAD NEWS from a FEDERATION DOCTOR

BANDICOOT CUTTLEFISH saves MICKEY’S DAUGHTER
MICKEY goes to WORK and drops a RING into a GLASS OF WATER, which blows up about four blocks of SAN FRANCISCO LONDON
CAPTAIN JAMES T. KIRK and ADMIRAL PIKE have a BORING AND POINTLESS CONVERSATION in a BAR

CAPTAIN JAMES T. KIRK: This is a boring and pointless conversation. Hey, I have a question. Why do you walk with a cane? You have a leg injury and we, a society with replication, faster-than-light travel, and matter teleportation, can’t come up with anything better than a cane? Seriously?
ADMIRAL PIKE: We have replication, faster-than-light travel, and matter teleportation, but medical science is still basically stuck at about 2010.
CAPTAIN JAMES T. KIRK: That’s stupid.
ADMIRAL PIKE: That’s bad writing.

ADMIRAL PIKE: We have been summoned to an emergency meeting.

CAPTAIN JAMES T. KIRK goes to the EMERGENCY MEETING with a lot of STARFLEET BRASS

CAPTAIN JAMES T. KIRK does some HEROICS
BASILISK CUBBYHOLE transports out of the TINY AIRCRAFT

CAPTAIN JAMES T. KIRK: The warp core has shut down and Scotty isn’t here. Chekov, put on a red shirt and go fix it.
BONES: Doesn’t that seem weird to you?
CAPTAIN JAMES T. KIRK: I am pathologically unsuspicious. Let’s get in a shuttle, fly to the Klingon homeworld, and arrest Bendersnipe Cattleprod. Everyone dress like civilians. That way the Klingons will never suspect a thing.

CAPTAIN JAMES T. KIRK: I hope we don’t encounter any Klingons on the Klingon home world.

SPOCK and UHURA start to ARGUE. The dialog WEDGES again. They ENCOUNTER KLINGONS on the KLINGON HOMEWORLD. After a CG CHASE that’s kind of POINTLESS, they are FORCED TO LAND

UHURA: I speak Klingon. I will try to reason with them.

The KLINGONS refuse to LISTEN TO REASON because they have FACIAL PIERCINGS which tell us they’re BADASS. BATTLEFLAG CRUSTYPEN kicks all the KLINGON ASS.

CAPTAIN JAMES T. KIRK: Brokenback Creepyfin, you are under arrest. Plus, I am going to beat you up now.

CAPTAIN JAMES T. KIRK tries to beat up BUCKLEBELT CABINSWORD, who just kind of STANDS THERE being decidedly NOT BEAT UP 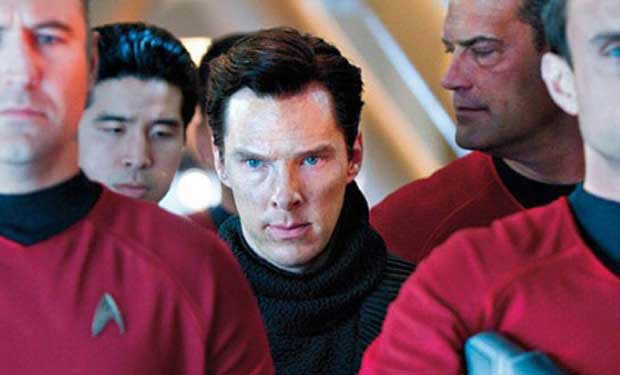 BRANDYWINE CATSKILLGRUNT: You have a conscience. Let’s talk.
BONES: Don’t talk to him, Jim! He will try to manipulate you! The man’s a psychopath!
BUTTERSNATCH CREAMYDRIPS: I’m not a psychopath, I’m a high-functioning sociopath. Do your research.
CAPTAIN JAMES T. KIRK: He’s not a psychopath, he’s a high-functioning sociopath. I will talk to him. Also, I am pathologically unsuspicious.
BAFFLEPRUNE CUSPIDOR: Look inside those torpedos.
CAPTAIN JAMES T. KIRK: Okay.

CAROL MARCUS: I can take the torpedos apart. Let’s put one on the shuttle. Also, I am going to take off my clothes. 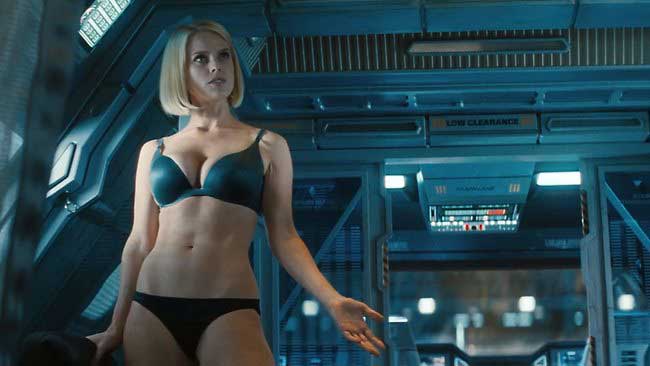 CAROL MARCUS: I am a bomb disposal technician. If you see me running, try to keep up.

CAPTAIN JAMES T. KIRK: Hey, Battlechess Carbonite, I found a person where the torpedo’s engines are supposed to be.
BLIMEYSTARS CAXTONFONT: That’s one of my crew. I put him there. I’m not really Bollywood Camperback. I’m really Khan. I was discovered by Admiral Marcus, who woke me up to design weapons and stuff for him so that he could start a war with the Klingons. I put all of my crew into the torpedos because of reasons. Plus you should totally check out these coordinates. And didn’t you get suspicious when your warp core shut down?
CAPTAIN JAMES T. KIRK: How many times do I have to say it? I’m pathologically unsuspicious. Hey Scotty, stop getting drunk at a bar and go hop a shuttle. I want you to check out these coordinates.
SCOTTY: Okay.

SCOTTY hops into a SHUTTLE and checks out the COORDINATES, where he sneaks into a HUGE ORBITING CONSTRUCTION FACILITY with a bunch of other SHUTTLES

SCOTTY: I sure am glad that the Federation doesn’t track shuttles using IFF. And doesn’t have radar. And doesn’t look for unauthorized spacecraft near a top-secret construction facility. And can’t count.

The GIANT SECRET BATTLE CRUISER appears and starts BEING ALL THREATENING

CAROL MARCUS: Dad! It’s me, your daughter! You can’t shoot us, I’m on board!
ADMIRAL MARCUS: …
ADMIRAL MARCUS: Wait, I have an idea! I’ll beam you over to the giant secret battle cruiser and then start shooting!

CAPTAIN JAMES T. KIRK: This dialog sucks. Let’s get out of here. They can’t chase us in warp, according to this rule I just made up.
BENDYLICIOUS KHANSURPRISE: Oh yes they can!
CAPTAIN JAMES T. KIRK: How come everyone gets to make up arbitrary restrictions on Star Fleet technology except me?

CAPTAIN JAMES T. KIRK: What is the meaning of this attack?
ADMIRAL MARCUS: Surely I have made my meaning plain. I have deprived your ship of power, and when I swing around, I mean to deprive you of your life.

ADMIRAL MARCUS: Wait a minute. We don’t have redundant computers and backup failsafes? Seriously?
NAMELESS GIANT SECRET BATTLE CRUISER ENSIGN: This is Star Fleet. All our technology is crap. At least when the plot requires it.
ADMIRAL MARCUS: Oh, right.

SCOTTY: Beam me over there!
CAPTAIN JAMES T. KIRK: I have a better idea. We are going to put on spacesuits and fly over there and go in through a hatch and then take over the giant secret battle cruiser. Actually, it’s Beelzebub Khanderpint’s idea, but I’m pathologically unsuspicious so I say let’s do it. Your job is to open the door for us.

They put on SPACE SUITS and fly over to the GIANT SECRET BATTLE CRUISER but because FEDERATION TECHNOLOGY is CRAP whenever the PLOT REQUIRES IT, they have to FLY THROUGH SPACE MANUALLY instead of using a COMPUTER to STEER THEM

They TAKE OVER the GIANT SECRET BATTLE CRUISER. ADMIRAL MARCUS argues with CAPTAIN JAMES T. KIRK and the dialog WEDGES

BUNNYLICKER KHANCRINKLE: This dialog sucks. I’m going to kill Admiral Marcus with my bare hands and then kick you a bunch of times.

BATKITTEN KHANHARNESS kills ADMIRAL MARCUS with his BARE HANDS and then kicks CAPTAIN JAMES T. KIRK a bunch of times

The TORPEDOES all EXPLODE on the GIANT SECRET BATTLE CRUISER, which takes MODERATE DAMAGE but fails to be DESTROYED

CAPTAIN JAMES T. KIRK: Wait, what? 72 photon torpedoes go off inside a starship and they don’t utterly obliterate it? We have replication and teleportation and faster-than-light travel, but our advanced weapons systems have less explosive power than World War I-era munitions?
CAPTAIN JAMES T. KIRK: Seriously, our ships are powered by antimatter! We could make a bomb the size of a matchstick that has more destructive power than a dozen hydrogen bombs, but our top-secret high-explosive torpedoes pack about the same punch as two strings of firecrackers and a Roman candle? Again I say, what the actual fuck?

CAPTAIN JAMES T. KIRK saves the ENTERPRISE and then DIES

BUNDERSPLIT KHANGOROUND: I am going to crash this giant secret battle cruiser into Starfleet Headquarters.

BONES: We need to capture Billetmole Khangrunter alive! Maybe his blood will bring Captain James T. Kirk back to life, too!