Since last week’s election, in which Mitt Romney was so confident of victory that he didn’t bother to write a concession speech, but lost by the largest electoral vote margin since 1996, there has been a picture floating around on conservative blogs and Web sites mourning the results. It looks like this: 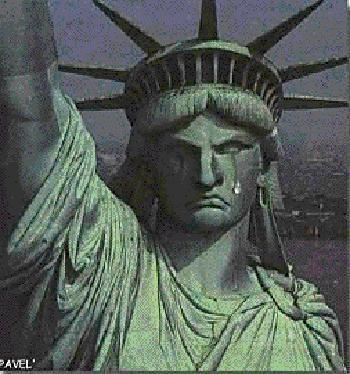 There are a bunch of variants on it, of course, but the basic theme is ‘liberty weeping because this terrible thing happened.’

This particular image first started making the rounds after September 11, 2001, and it’s been recycled to express dismay over the conservatives’ non-preferred guy winning the election.

It is also, I think, an ironically appropriate image…but perhaps not in the way the conservatives who are using it might intend.

The Statue of Liberty was dedicated in October of 1886. The Civil War had only recently ended,and Reconstruction was in full swing. On the day the Statue of Liberty was dedicated, the requirement that you had to be a landowner in order to vote had only been abolished six years ago. Naturalized US citizens were still not permitted to vote. Blacks had only first been offered the vote sixteen years earlier, and many barriers faced any black man attempting to exercise that right; it would be another 79 years before the Voting Rights Act allowed blacks to vote in every state.. Women were still more than three decades away from being allowed to vote. The poor were still barred from voting by poll taxes, and would be for another 78 years. Native Americans were still 38 years from being enfranchised.

When the Statue of Liberty was dedicated, interracial marriage was a crime in all but 21 states. Every state, without exception, had sodomy laws barring homosexual sex. It would be 76 years before the first state, Illinois, decriminalized consensual sex acts between members of the same sex, and more than a century (117 years, to be exact) before Lawrence v Texas invalidated the remaining sodomy laws in the United States.

At the time the statue was dedicated, Jim Crow laws were gaining ground in the South; the first such laws had been on the books for eleven years, and within two years of the dedication, laws in every single Confederate state would enforce segregation of blacks and whites in public areas. It would be another 78 years before the last of these laws was dismantled.

An America, in short, in which the notion of a black President of mixed-race ancestry who championed equal opportunity of gays and women would be an unthinkable abomination.

So it is appropriate, I think, that the image of a weeping Statue of Liberty should be so popular among conservatives. This is, after all, the America they would have us return to.

Mitt Romney found it impossible to believe that he could lose because he was incredibly popular with the only electorate he believed mattered: white men.

Among white men, Romney was a sure bet. His campaign forgot that white men aren’t the only voters that matter.

None of this is a surprise to the political right, of course. In 2001, after George W. Bush’s bitterly contested election, Ann Coulter said on television, “I think women should be armed but should not vote… women have no capacity to understand how money is earned.” In 2003, she said “It would be a much better country if women did not vote. That is simply a fact. In fact, in every presidential election since 1950, except Goldwater in ’64, the Republican would have won, if only the men had voted.”

This idea is taken to an even more surreal conclusion by a blogger on the Christian Men’s Defense League Web site, who writes:

Women want to delay marriage as long as possible so they can ‘have it all,’ and usually ‘have it all’ means ‘have as much hot alpha sex as possible without any consequences.’

[A]ll the Obama administration had to do was scare them that Mitt Romney was going to take away their birth control and their access to abortion. The fear for them is that, without birth control and abortion, they might actually get pregnant and have to give birth. That is scary not simply because of the economic burden of having a child (since, hey, they can get all kinds of cash and prizes if that happens), but because if that happened then everyone would know they’re sluts, and their image as daddy’s pure little snowflake princess goes out the window. […] Admittedly, the desire to slut it up isn’t the only factor in the gender gap. America has a fiscal problem primarily because women want free stuff without ever having to work.

Women vote, and minorities vote, and the nation’s government looks different than it would if only white men voted. The Statue of Liberty must surely feel out of place, living in a world so alien to the one in which she was born.

A common narrative among the folks using this image of a weeping Statue of Liberty is that Romney’s defeat means “the end of freedom.”

I’m not sure what this means. It sounds like dog-whistle language to me–coded language that means something other than what the words would suggest, the way “state’s rights” is coded language for racism and segregation.

The “freedom” that was lost when Romney lost certainly isn’t freedom from government interference in one’s private life; the Republicans during this election cycle frequently advocated massive government intrusion in almost every area of sexuality, from the availability of contraception (something else that would have been unthinkable when the Statue of Liberty was built) to endless nattering about the fine grades of rape (“violent” rape, “legitimate” rape, “real” rape–as opposed, presumably, to the sort of faux-rape that occurs when you just wanted to have sex with a woman who didn’t want to have sex with you). In a world in which women didn’t vote, the numerous and well-documented Republican gaffes about rape would not have been gaffes at all.

Nor is it any other variety of freedom I can identify. It isn’t freedom of speech, nor economic freedom (Republicans since Reagan have often played the ‘welfare queen’ card, creating a strange alternate reality in which black women become fabulously rich by having lots of children, yet have involved us in ruinously expensive wars that they have not funded while using tax breaks and corporate welfare to siphon vast quantities of public money upward to the wealthy). Nor is it freedom of religion; conservatives in the US are among the most religious strata of society, but only if that religion is their own particular form of Protestant Christianity.

I’m not sure if those are the freedoms that the Statue of Liberty represents, but it seems clear that many people would prefer to live in the world as it was when that statue was erected.

4 thoughts on “Freedom? I do not think that word means what you think it means”