As we closed in on Cincinnati, bearing down on the city like…err, two people in a car packed full of stuff, Hurricane Irene bore down on Boston like a a violent, tropical, cyclonic storm of the western North Atlantic, having wind speeds of or in excess of 72 miles per hour and powered by a thermocline along the boundary layer between ocean water and air.

Normally, ordinary reasonable people will, when faced with the prospect of a hurricane, attempt to leave the place it’s approaching. We two, however, as even the most casual of observers may by this point in this tale be able to infer, are neither ordinary nor reasonable.

Our original plan had been to arrive into the delightful care of the pet lesbians late that evening, then spend the entire next day exploring Cincinnati with them before departing on the last leg of our journey to Boston the following morning. After our encounter with the Guatemalans, though, all semblance of planning had been utterly demolished, and even the few remaining tattered scraps of our intentions were soon to be blown away by Irene’s fierce winds.

As Cincinnati’s city lights loomed in our windscreen…

Okay, okay, you got me. That’s a lie. A blatant, dirty, filthy lie. Cincinnati’s skyline at night is hardly capable of looming over a chihuahua puppy with an inferiority complex. The only way to get its skyline to loom involves the use of a helicopter, a telephoto lens, and about six hours in Photoshop. Seen from Interstate 75, the glittering vista of Cincinnati is something of a damp squib. I’m sure it’s a lovely city and all, but the approach turned out to be…well, let’s just say I’ve seen more sparkle during a drag king burlesque show at a science-fiction convention. But no matter.

Ahem. Back to the story. While Claire maneuvered the car into Cincinnati’s warm if homely embrace with the precision and grace that is the hallmark of everything she does, a man’s disembodied voice on the radio kept us updated on Irene’s progress along the Eastern seaboard. According to NOAA projections, which are usually better than tea leaves but not quite as good as a bookie’s spread on the Red Sox game, the hurricane had scheduled its arrival to correspond almost to the hour with hours…confirming a deeply-held suspicion that I’ve had for quite some time, which is that major meteorological events generally happen in order to inconvenience me.

So we determined, in defiance of any sort of reason or common sense, to alter our plans so as to arrive in Boston ahead of the hurricane, the better to appreciate Nature’s wrath from the inside. The reasoning seemed sound at the time–if we got there ahead of the hurricane, at least we wouldn’t be driving through it, right? I mean, that makes some kind of sense, right?

Sadly, it meant cutting short our stay with the pet lesbians and departing early the next morning.

I will confess to being a bit testy about this as I had quite looked forward to spending some quality time in Cincinnati. We arrived at the home of the pets rather late, where we were greeted by two highly adorable but groggy women (reassembled from a pile of kittens under our gaze) and their two cats, Calcifer and Mei Mei. This is what they look like in human form (this picture was actually taken at a con some time ago, rather than during the trip, but it’s a good likeness): 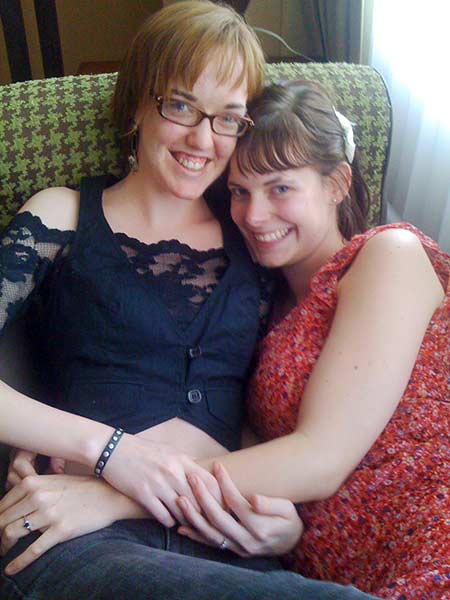 Now, at this point it might be necessary to segue for a moment into the matter of naming cats.

I, personally, have always wanted to own a cat named Loki. zaiah objects strongly to this plan, even going so far as to declare it a hard limit; she will not, she says, share her home with a feline named after a trickster god, on the idea that this might be painting a target that is perhaps a bit too appealing for the whims of Fate to pass up.

As for me, I have the Kanji character for Chaos tattooed on my body, so at this point, I am probably well beyond concerns about self-preservation from the fickle affections of uncaring Fate. I blame it on Youthful Indiscretion, as I hear that’s what one does. zaiah, however, has not been so rash, and so is more concerned with avoiding the gaze of Fate.

Anyway, I bring this up because the pets have two pets: a cat named Calcifer and a cat named Mei Mei, as I mentioned.

This is Mei Mei. 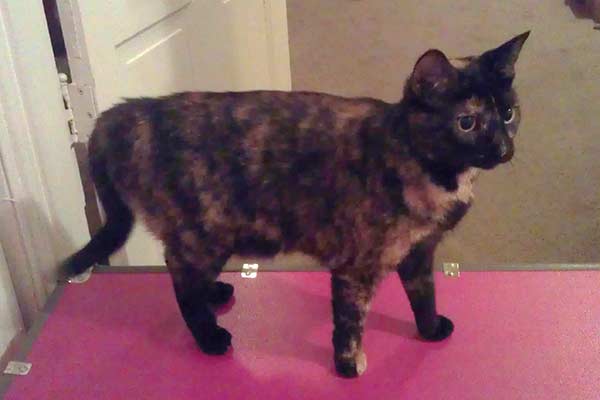 Now, one might argue that perhaps living with a pair of demons in feline form is not the best path to take in the spirit of not wanting to paint a huge target on one’s self for the entertainment of the fates. Technically, I suppose, only Calcifer is a demon (and a minor one at that), though Mei Mei means “sister” and one could infer that the sister of a demon is also a demon, or at least half-demon if the sister is a step-sibling, unless perhaps the sister was adopted, which I suppose might be possible given that I’m not aware of any policies forbidding cross-planar demonic adoptions in Cincinnati’s legal code, though I’m also not aware of any adoption agencies that place the unholy spawn of demonic forces from the Pit…but I digress.

The two of them and their cats greeted us, and made us comfortable in a bedroom with a slanting floor. We chatted for a time (much too long, really considering the lateness of the hour and their schedule the following morning, but I swear it wasn’t my fault…they’re both much too interesting NOT to talk to!).

They were gone on some mysterious errand when we woke the next morning, or perhaps they had reverted back to being a pile of kittens and were watching from somewhere just out of sight. We packed up the car–a task made, it must be said, considerably easier by the absence of our traveling companion, who presumably at this point was grooving in Nashville with her Chinese-speaking Guatemalan companions, or doing whatever it is one does in Nashville while in the company of one’s Chinese-speaking Guatemalan companions, which is an experience outside the realm of knowledge of your humble scribe. It was with considerable sadness, at least on my behalf, that we set out for Boston, racing the fury of Mother Nature to see who would get there first.

As it turned out, Mother Nature has a short attention span.

I’ve been in many hurricanes in my time. It’s inevitable, really, when one lives in Florida, which I did for many of my formative years. I’ve strong memories of driving through the jaws of a fearsome hurricane on the way back to Tampa from Atlanta, on account of some poorly-considered scheduling on the part of the DragonCon staff, who unwisely chose to make the convention coincide with a hurricane. I know what hurricanes look like, so I speak with authority when i say that Irene was a bit rubbish.

The trip into Beantown turned out to be effortless, as all the freeways into town were utterly deserted. The lanes leading out were jammed bumper-to-bumper with folks fleeing Mother Nature, but we were just about the only folks heading into town; it looked, all in all, rather like a scene from a made-for-TV zombie apocalypse movie, only with fewer walking dead and a bit more rain.

Not a lot of rain, mind. When we arrived at the home of Claire’s friend, with whom we had arranged to stay a night before she moved into her new digs at the edge of the Tufts University campus, the rain was falling in patchy gusts from a sky that looked as if it was trying to be sullen but couldn’t quite manage it, much as a young child who wants to be cranky but has just finished a cupcake and two ice cream cones and isn’t quite sure she remembers why. Occasional gusts of wind whipped the leaves around, but didn’t quite work up enough enthusiasm to separate them from the trees.

We ventured out in search of cheap Mexican food, and witnessed an especially vigorous gust of wind that toppled a plastic sign out in front of some store or other, but overall I had the feeling that Mother Nature was really just phoning it in. And I have to admit I felt a little let down. I mean, I gave up a day in Cincinnati, and the way I see it, it was the least she could do to acknowledge that sacrifice with something that was worth rushing into town for. Stinging rain whipping out of a darkened sky, angry bolts of lightning tearing apart the firmament, gale-force winds making the buildings shudder straight down to the foundations…hell, at least an unexpected thunderclap or two would have been nice.

But no. A bit of insincere wind and occasional sprays of light rain do not, in my book, warrant a mad rush away from spending time with the pets. Mother Nature clearly didn’t respect me or my needs, I feel, and I am still a trifle annoyed at her for it.