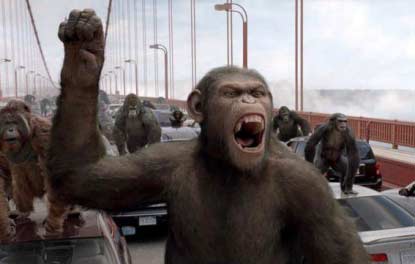 Which, at least in the latter case, is not necessarily that far off the mark, as two or more organisms competing for the same ecological niche generally results in what biologists like to call “a bit of a sticky wicket.”

However, the fly in the ointment of this particular Hollywood trope is that there are currently just south of seven billion human beings on the planet, making us one of the most populous species of vertebrates in the whole history of ever, and therefore a rather difficult adversary to unseat.

Plus, we have, like, machine guns and cell phones and stuff.

Fortunately, Hollywood screenwriters are up to the task of disposing of such trifling little technicalities with the flick of a plot twist. Unfortunately, they aren’t up to doing it well. The end of Rise of the Planet of the Apes had me screaming “EPIDEMIOLOGY, MOTHERFUCKERS! DO YOU SPEAK IT?” in my best Samuel L. Jackson voice (which, truth be told, isn’t really that good), but still…EPIDEMIOLOGY, MOTHERFUCKERS! DO YOU SPEAK IT?

24 thoughts on “Movie review: Rise of the Planet of the Apes”