Okay, so I admit it. I am a tool of Hollywood. Every now and then, a movie comes out which I know I will see, despite the fact that my higher self is screaming at me in disgust and loathing for even considering the prospect.

Like the new Star Trek reboot, for example. I went to see it knowing it was going to be a travesty, and I was right. When the sequel comes out, I will see it, too, even though I know it’s going to be a disaster of a movie and I’m probably going to detest the whole shambling thing.

I saw the latest incarnation of the Indiana Jones saga adventure money machine, expecting it to be bad, and it turned out to be even worse than I could ever have dreamed. And if another one comes out, I’ll probably see it, too (and say snarky thins about it on my blog).

It was with that feeling I went to see a cheap matinee of Cowboys and Aliens. 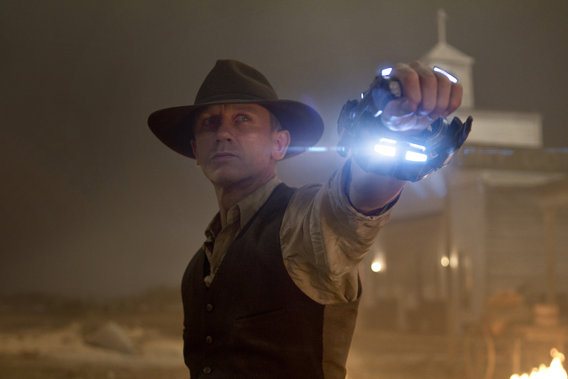 It’s a gritty Western in which a rugged group of cowboys in a small Western town take on a rampaging group of aliens with spaceships and stuff. With a premise like that, how could it possibly go right? I mean, seriously, think Battlefield Earth for a prime example of what this idea is likely to lead to.

And pleasantly so, which is a bit of a rarity. (That’s one of the downsides of being an optimist; an optimist is almost never pleasantly surprised.) The plot–there was one! I’m totally using that word non-ironically!–was surprisingly strong, and the move really was a whole lot better than it had any right to be. All it really needed was dialog, and it’d have been awesome indeed.