The previous day’s exploration around the immediate vicinity of the castle had inspired in some of us a certain wanderlust, which grew inexorably until it eventually became so powerful as to compete with the other variety of lust. So it came to pass that after the morning’s kinky sex activities, many of the folks in the castle took it upon themselves to propose a trip to the nearby town of Chauvigny, which in addition to being surrounded by Outdoors also was allegedly was positively brimming with History.

That combination sometimes produces Neat Stuff To See, so when I was invited along, I said ‘yes.’

Now, it is a truism often repeated in many circles that kinky poly folks are as difficult to herd as a gaggle of cats. And, it must be said, there is sometimes some tiny grain of truth, however trivial or vanishingly small, to this perception.

We opted to take two cars into Chauvigny, which turned out to be something of an error. An unfortunate error in communication between the two drivers of these two cars sent us to entirely different rendezvous points, with the sort of comical results one might normally expect from a Hugh Grant movie.

We, meaning the folks in the car I was in and I, ended up at a rest stop just outside the town, adjacent to a small walled cemetery. French rest stops are fascinating things. Like their American counterparts, they have bathrooms. Unlike their American counterparts, the bathrooms are not segregated by sex. Oh, they look the same, more or less–plain concrete buildings with just enough room for a row of toilet stalls.

But in France, both sides are filled with stalls. The urinals are on the outside of the building, in plain view of the parking lot.

The cemeteries are weird, too. Everything is smaller in Europe, including the cemeteries themselves. The graves are packed in shoulder to shoulder, with scarcely any space between them. 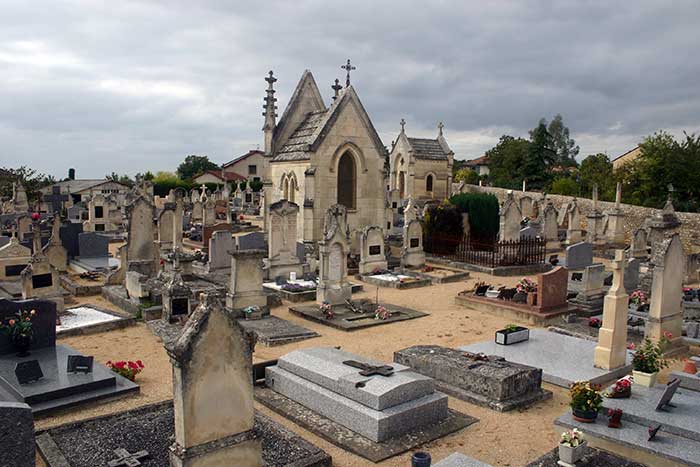 While we waited (hopelessly, as it turned out) for the folks in the other car to arrive, we decided to take advantage of the location to shoot some pictures. I love the look on Emily’s face here. 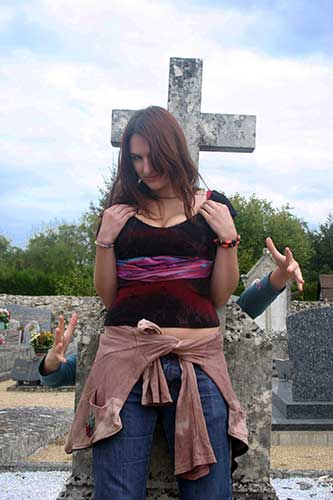 I wonder if this is sacrilegious. 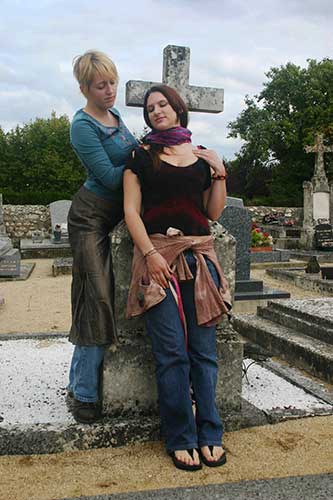 Eventually, phone calls were made, our mistake was realized, and we piled back into the car to go to the place where we were supposed to meet with the others, who had apparently been waiting for us for some time.

Along the way, we passed the ruins of Minas Tirith. I didn’t realize it was in France, though I suppose in hindsight the fall of its sister-city at Minas Ithil, later renamed Minas Morgul, makes more sense now. 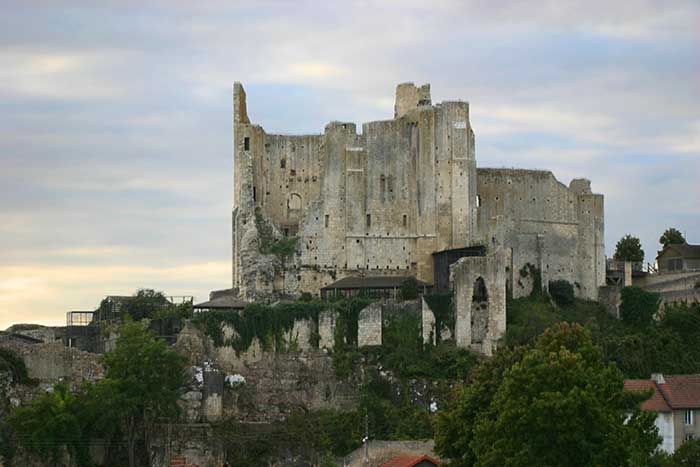 Our path actually took us right past the ruins themselves. Look, you can see the spot where Denethor set fire to the keep, right before the Haradrim started their seige! 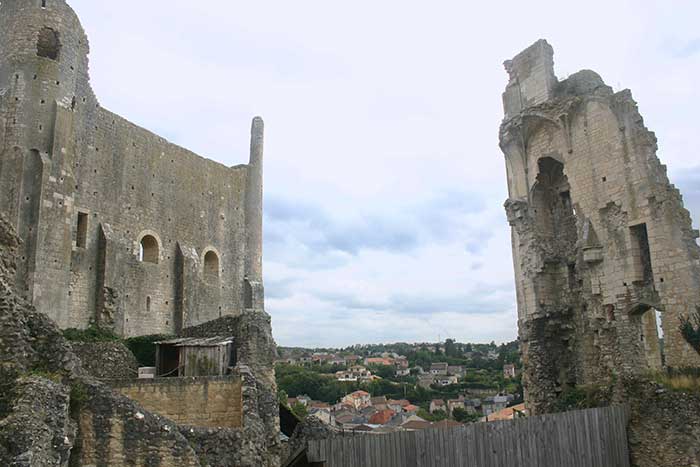 In 1775, a man who professed himself to be a doctor invented the word “nymphomania” to describe a condition of unnatural and pathological sexual desire in women, where “pathological” desire was thought, apparently, to mean any desire at all. The good Dr. Bienville, the gentleman in question (whose life could perhaps have benefitted from some greater sexual desire on his own part) wrote that there were many symptoms of this grave and indecent lust, including a fondness for chocolate and the reading of books.

If this is the case, Chauvigny is a very indecent city indeed, because if there’s one thing it has a lot of, it’s books. The history of Chauvigny is closely tied up with the history of printing. When news of Gutenberg’s new invention arrived in France, the citizens of Chauvigny, realizing that literacy was likely to be something big and that the printing of books is a profitable enterprise in a newfangled literate society, fell all over this printing thing like Dick Cheney on a taxpayer’s penny. Even today, the city is dominated by quaint little bookshops–rows of them, all along the narrow twisty streets.

The town pays tribute to this rich literary heritage with many displays of antique and modern printing equipment, that lines the roads and twisty little parks. Emily, who if I recall correctly is a librarian, particularly appreciated the old printing equipment, and asked me to take a picture of her next to some of it. 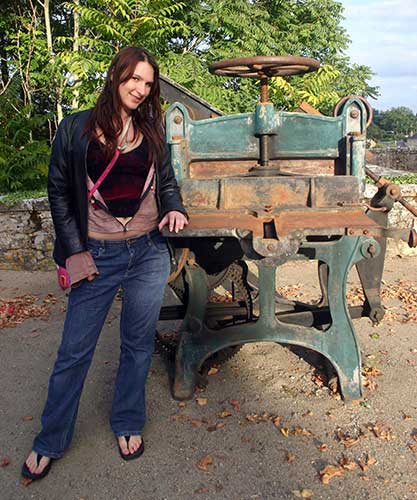 Chauvigny is a lovely town, with more charm than you can fit in a wheelbarrow. Besides the bookstores, they also have churches, two things one does not normally see in such close proximity. 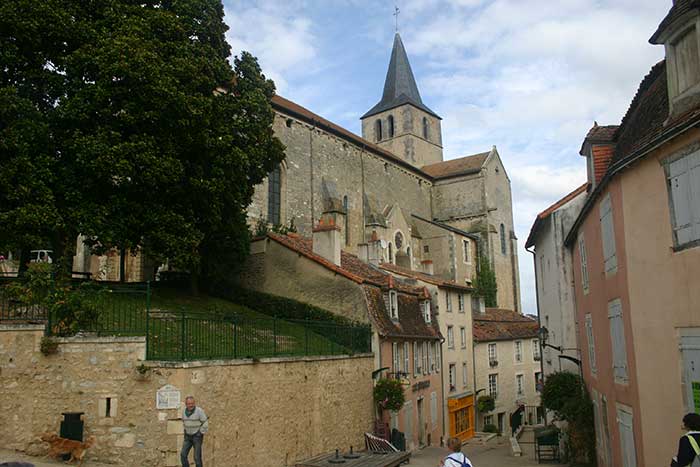 And, down by the waterfront, tucked back from a narrow alleyway behind a grape-covered stone wall that forms a private courtyard, they have an English café. A real English café, featuring English tea and breakfast.

As we were by this point some hours from breakfast and with dinner still hours in our future, many of our party were beginning to suffer from tea withdrawal. So it was only natural that we should choose to feed our addictions sample their hospitality. 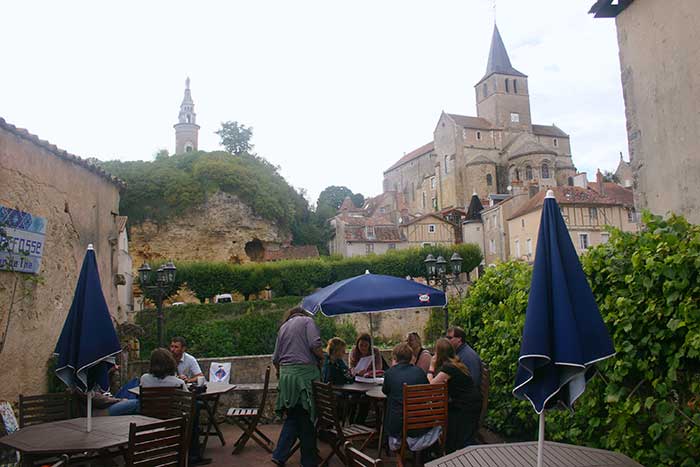 The British take their tea very, very seriously, with the result that they are very, very good at it. This café served vey good tea indeed, and crumpets as well.

Now, here in America, we have these things we call “English muffins.” English muffins are to crumpets what a Segway is to a mint-condition Ferrari F430 Spider. A crumpet is an English muffin touched by the hand of God, and covered in sweet, sweet creamy butter straight from the loins of Aphrodite herself. It is an English muffin that has attained the transcendence of Nirvana and returned bearing the wisdom of Solomon, only with less proclamations about cutting babies in half and more warm melt-in-your-mouth goodness.

The café also had a friendly, playful black cat who immediately decided to adopt the whole lot of us. He was especially fond of seinneann_ceoil‘s long scarf, which he thought was absolutely the coolest thing he’d ever seen in the whole history of ever. 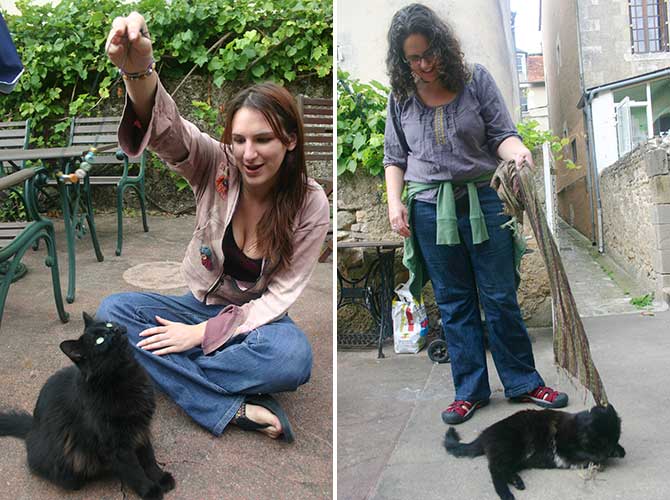 The view from the café was just stunning. I took this picture from my seat at the table: 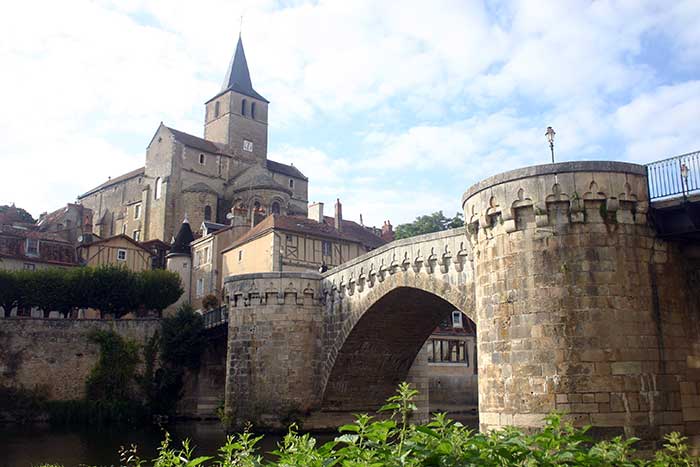 Bizarrely, the café also featured this mannequin, complete with bunny ears, across from the cash register. I felt compelled to get a picture for emanix, who was feeling unwell and had not accompanied us. 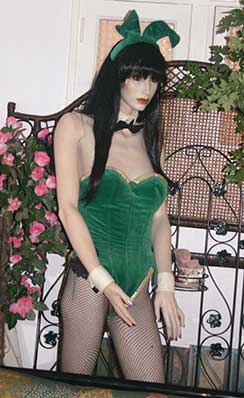 Our unnatural thirst for English breakfast tea slaked, at least for the moment, we headed across the bridge to explore the cathedral (early Gothic, according to seinneann_ceoil) on the other side. The high vaulted ceilings and arched stained glass windows were quite beautiful, though my travels in Russia had led me to expect more in the way of over-the-top religious iconography and gold leaf. 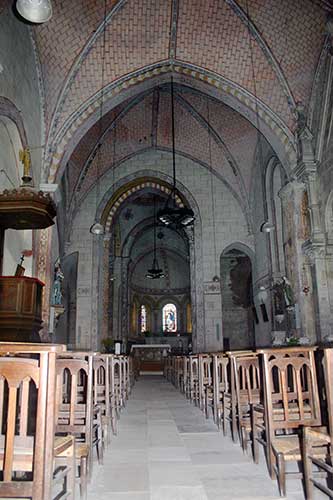 The kneelers were pretty cool. As soon as she saw them, Emily had to try them out.

This picture makes me feel wrong in so many ways, I might not ever want to feel right again. 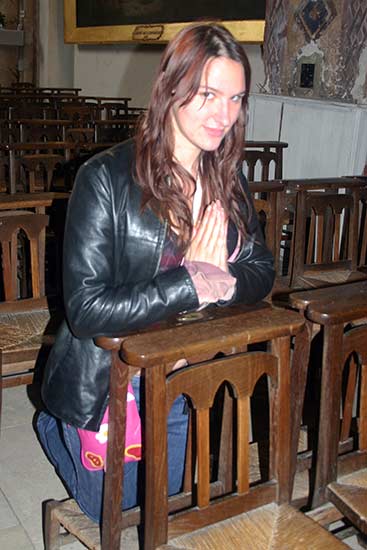 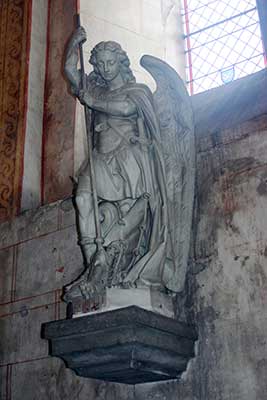 We left the church and walked around the small park adjacent to it. This is the view from behind the church. 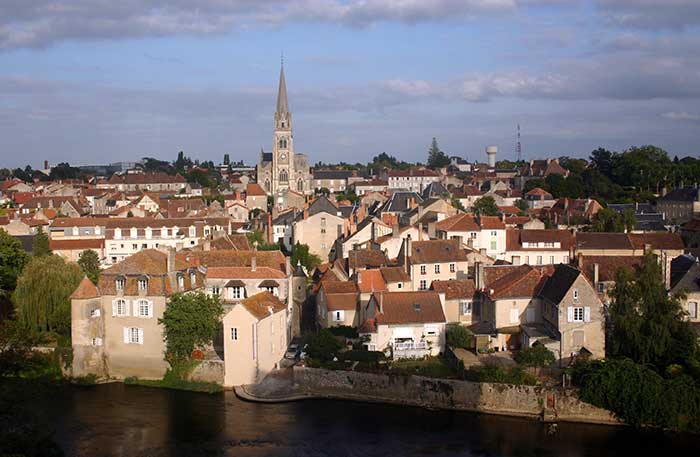 Just a little ways farther down the river, and a bit to the right of the bridge, we could see the courtyard of the café where we’d had our tea and delicious, heavenly crumpets of heavenly heavenliness. 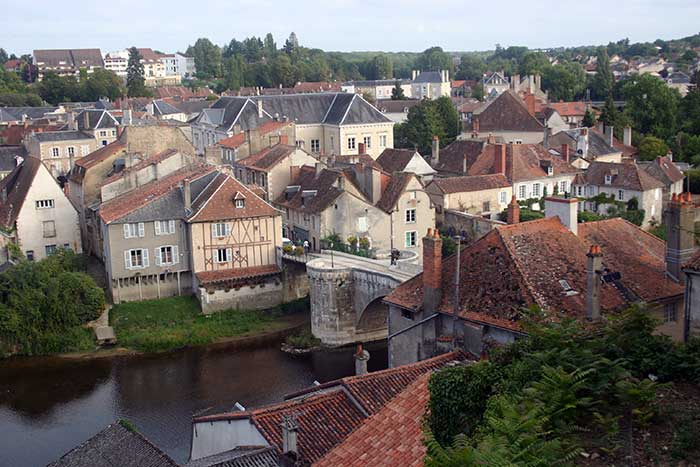 The flowers were in full bloom, everywhere we looked. As we wandered back toward the car, I found these growing on a bush near the café. 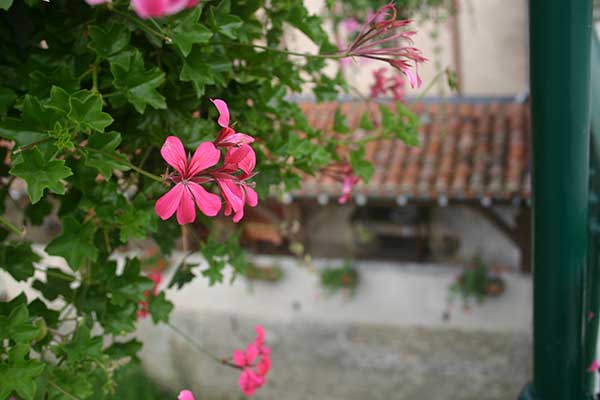 Alas, all good things must come to an end, like the last few crumbs of crumpet on the serving plate of destiny. We headed away from Chauvigny, that harlot, that nymphomaniac, that literate and wanton mistress in a far-off land, with her kneelers and her books and her crumpets topped by the goddess of love, and went back to our castle for an evening of…

…but this has gone on for quite long enough already, and I shan’t bore you further.

18 thoughts on “Adventures in Europe, Chapter 31: Minas Tirith and Beyond”