In 1977, a guy named Stewart Parnell founded a company called Peanut Corporation of America. Parnell built the company into an enormous supplier of peanut butter, primarily for candy makers, that eventually was responsible for about two and a half percent of the nation’s total production of peanut butter. He had a very simple strategy for business success: underbid everyone.

Peanut Corporation of America made tens of millions of dollars a year but ran on a shoestring budget. In fact, Parnell Was so cheap that some of his processing plants were unlicensed and unregistered; he ran a plant in Plainview, Texas, that the state government didn’t even know existed.

Which is an awesome money-saver, if you think about it. You can’t be forced to comply with inspection results if the facility is never inspected; you don’t have to worry about FDA regulations or compliance with OSHA mandates if the FDA and OSHA don’t know you exist.

This is actually a post about religion, and not, say, Libertarianism. Hang on, I’m getting there.

Anyway, as you might expect, this approach to business had a predictable result. In 2008, nearly 700 people had food poisoning from peanut butter produced by Peanut Corporation of America, and nine of them died. A massive recall was launched, the government started inspecting Peanut Corporation of America facilities and discovered a horror show (peanut butter that was shipped even though the company knew it was contaminated with salmonella, leaky plant roofs, air conditioning systems that sucked bird shit from the roofs and sprayed it over vats of peanuts, that sort of thing. The plants were closed by the government, the company went bankrupt, and there are still Federal investigations pending against our hero, Mr. Parnell.

All this did lead to one humorous moment, when he was called to testify before Congress and took the fifth when he was asked to eat some of his own peanut butter. Mad lulz aside, though, it seems Mr. Parnell is a very bad man.

He’s also a very bad man with an unimpeachable religious pedigree. He belongs to that particular school of Evangelical Christianity prominent in his home town of Lynchburg, VA. His sister was married to a relative of Jerry Falwell’s family, and he himself was a conservative Southern Baptist.

Now, one of the things we hear about religion is that religion serves a valuable social function by providing a framework of morality. Morals, the religious say, are codes of conduct created and sanctioned by God to direct human behavior toward one another, and indeed some religions claim some morals which are, in fact, good ways to behave.

The problem is that the moral values promoted by religions, especially conservative religions, tend not to focus very heavily on things like “do unto others as you’d have them do unto you”–a value claimed by many religious tradition but not really advocated very strongly by most of them. Instead, the moral values are more often, it seems to me, promoted as arbitrary lists of things you’re supposed to do and things you’re not supposed to do, with no coherent underlying logic to them.

And it seems a lot of them are about sex.

When you look at the major organized religions in the United States, and examine their moral teachings closely, you can’t help but come away with the notion that God is nothing short of obsessed with what goes on with our crotches.

This obsession with sex extends to social ideas about morality. If someone tells you “I have strong morals” or “I believe in good moral values,” you can be pretty sure that what they’re talking about is sex.

And they’re probably not going to follow those statements up with “I believe that people should do unto others as they would have done unto them,” either. For all the fact that religion likes to give lip service to notions like that, I doubt many “moral values” folks actually say “That’s why I believe in people making their own choices about who they have sex with, because I want them to let me make my own choices about these things.” 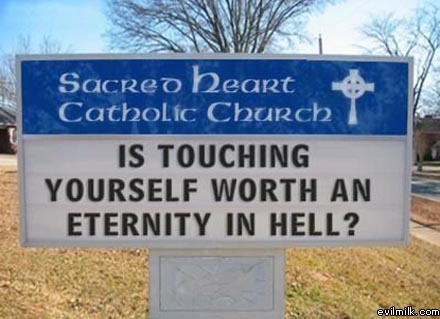 There are all sorts of reasons why institutional power structures are obsessed with sex. It’s a great hook; control people’s basic drives and you control the people. It’s an inevitable outcome of the way our brains work; fMRI studies have suggested that people who hold socially conservative ideas are strongly motivated by feelings of disgust, and tend, by and large, to believe that if something makes them feel an emotion of disgust, their emotional response is proof that the thing itself must be inherently wrong. It’s a characteristic of the way we form social bonds; we are strongly driven, as part of our evolutionary heritage, to divide social groups into “in” groups and “out” groups, and to seek differences to delineate those groups.

And so on, and so on. None of those things is really all that interesting, I think; it’s all just part of the tedious and yucky parts of how social power structures flow, as disagreeable but inevitable in its operation as the flow of sewage through a city’s pipes, and often just as pungent.

So many religions have made such vigorous claim to the throne of moral arbitration that there are actually people who believe that without religion, a person can not be moral. People ask ridiculous questions like “Can atheists be sexually moral?” Commentators claim that without a god, a person can not have “morality in his heart;” and some people even point to the fact that the non-religious are less obsessed with sex than the religious as proof that those without religion are less moral.

But having successfully made the argument to a great many people that they and they alone can protect and promote morality, what do they do with it? That’s the part that disappoints me.

You can argue, of course, that men like Stewart Parnell are driven by greed, and would not behave in moral ways regardless of the teachings of their adopted religions. And that might be true. But the fact is, the major religious organizations tend to focus so heavily on sex as the beginning and end of morality that other lessons are let slip by the wayside.

When a person adopts the idea that morality is primarily about the goings-on in his crotch, a dangerous thing happens. That person can very easily say to himself “I m a good person; I don’t cheat on my wife, have premarital sex,lie with other men as I lie with women, or do her up the poop chute. I am a moral person; immorality is about my sexual behavior, and I keep my sexual behavior confined within the proper parameters.” And once a person says “I am a moral person,” he may stop watchdogging his decisions. He doesn’t question the moral nature of his own actions, because, after all, morality is about sex, right?

I’m not saying that religions don’t talk about the moral dimension of things besides sex. But I am saying that, by and large, so much emphasis is placed on sex that they don’t make the case for an overarching, coherent foundation or morality; they don’t argue that morality is ultimately founded on the notion that you should treat others with compassion and respect, and not make decisions which adversely affect the lives of others.

By, for example, selling them contaminated peanut butter.

And they can’t. They can’t make this case, because if they do, many of the constraints they place on sex begin to look like anomalies, arbitrary rules not founded in any sort of notion of treating others with compassion and respect. 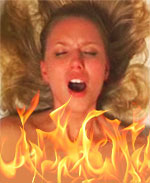 Especially if you accept that it was that very same god who put our wibbly bits within arm’s reach in the first place.

Morality is not about memorizing a set of rules. It is, when it is most properly applied, an entire system of ethical decision-making, one that places a watchdog within us which examines our choices in light of the way those choices affect others. It is an internally consistent set of checks and balances, which reminds us to place ourselves and our actions within a larger context and take responsibility for the effects of those actions on other people.

This weird, obsessive-compulsive fixation on sex will have to end before any religious institution can really become the moral authority they all claim to be.

Now if you’ll excuse me, I have some peanut butter eggs to eat. I hope the company that made them isn’t owned by a conservative Christian.

92 thoughts on “How religion has let society down”