I’ve had a guest for the past four days, and it’s been a lot of fun, because it’s given me the opportunity to do something I haven’t done in the three years I’ve lived in Atlanta: play tourist.

So the past several days have been spent running all about Atlanta visiting The Sights. Every town has Sights; in Orlando, The Sights mostly involve an anthropomorphic rodent and his whacky team of intellectual property attorneys, whereas in the tiny farm town of Venango where I grew up, The Sights almost always involved cows. Lots and lots of cows. Cows, and wheat, but mostly cows.

Here in Atlanta, The Sights include Stone Mountain, though I still maintain that perhaps the word “mountain” is a little ambitious.

This is Stone Mountain: 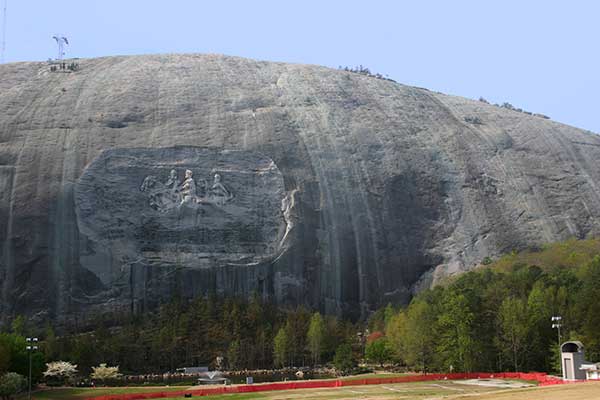 Essentially, it’s a ginormous slab of granite jutting abruptly up out of the ground without any warning, or even any of the things like foothills that proper mountains use to let people know they’re coming.

Quite some time ago, a group of people saw this gigantic piece of granite and said “Hey! We could carve something into that!” Here’s a closeup of the carving that’s been blasted out of the rock: 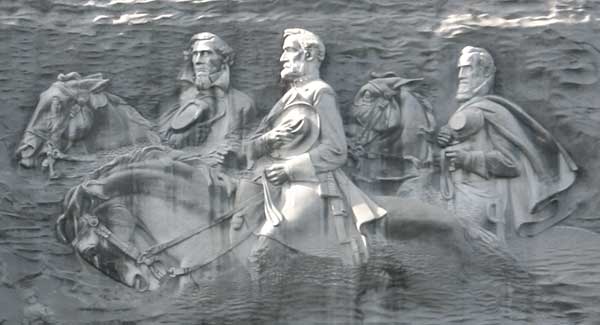 This being Georgia, we can’t have a carving without invoking the War of Northern Aggression, so the people you see here are none other than General Robert E. Lee, Jefferson Davis, and “Stonewall” Jackson. Lee looks a little long in the face, as he perhaps contemplates the wisdom of an agrarian society going to war with an industrialized society; Davis, heart heavy, ponders what the history books have to say about the fate of such agrarian societies; and Jackson looks stoic as ever, while his horse, arguably the wiser of the two, looks ahead at the future of the Confederacy with wild-eyed terror. 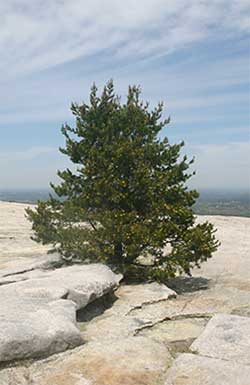 The current carving is actually blasted out of the remnants of an earlier and much more ambitious carving, designed in 1914 by Gutzon Borglum, a man who would later leave his mark (in a highly literal fashion) on Mt. Rushmore. Borglum was a gifted artist but suffered the unfortunate congenital condition of being a Yankee, so no sooner had he begun than political rivalries erupted which would ultimately culminate in his design being scrapped, and, er, scraped off the granite face by dint of chisels and high explosives. The rest of the history of this monument is caught up in the frightfully ordinary and frightfully dull sort of petty squabbling that tends to accompany confederacies of all sorts, and it wasn’t until 1970 that the second-rate, lackluster monument you see here was finished.

The backstory actually makes a more fitting tribute to the Confederate States of America than the stone carving itself, but I digress.

Visitors to Stone Mountain can hike up to the top or, if they are of a more reasonable disposition, take the cable car, which is what we did. The cable car is Swiss-made and offers visitors a few moments of sheer terror to go with the view, something the park employees find endlessly amusing

The top of this lump of rock is actually very cool. This chunk of granite is bigger than God and twice as real, and from the top of it, the view is awe-inspiring.

The wind occasionally blows dust and dirt across the mountain, where it sometimes accumulates in cracks in the rock. This gives rise to a thriving ecosystem, like this tree, which must surely be The Most Optimistic Tree In The World. The dirt in this crevasse extends downward about half an inch or so, so the roots of the tree skitter sideways along the rock like John McCain courting a neocon. 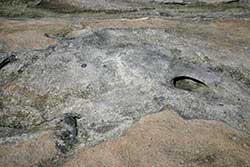 Granite, unlike silicone, has a regular stress geometry; when it fractures, it tends to fracture in circles. Wind and rain continue with the basic circular theme, so the top of the rock is studded with rounded depressions.

These depressions fill with rainwater when it rains, and shortly thereafter the miracle of Life blossoms forth with the promise of renewal, tenacity, and hope in the pit of unrelenting despair we call the Universe. Life, in this case, consists of these rather odd plants that look like grass but are actually quillworts, the rarest of all plant life on Earth.

Quillworts grow in only three places on the planet–all of them unreasonably huge chunks of granite. Perversely, they seem to enjoy sprouting from tiny little depressions in solid rock that fill with rainwater, and becoming dormant again when the water dries up. One would think that they might be a lot more successful if they’d perhaps chosen a less inhospitable ecological niche to occupy, but who am I to judge some other organism’s choices?

The hardiness of these bizarre plants and the fact that they can scrabble out a foothold on such a forbidding surface is a testimonial to the difficult engineering challenge posed by wiping out all life on earth. A lot of folks like to say that nuclear war would wipe out all life on earth; those folks have no idea what a tough job that would actually be.

Oh, it might wipe out all life that we like, which basically means all life that either owes us money or is cute and fuzzy, or all life that we fancy eating, but there’s a great deal of life (much of it slimy, or pinchy, or equipped with stingers, or brown and squidgy and generally unappetizing) that we’d actually be pretty hard-pressed to get rid of. And the weird stuff living in undersea volcanic vents likely wouldn’t take much notice of anything we did, though that’s a post for another day.