Sunday, dayo and I staggered out of bed at the ungodly hour of noonish or so, after a rousing and lively Saturday evening that included, among oter things, meeting many cool people and chaining dayo up in a sling. We were awaiting the arrival of cunningminx, who’d promised to be by in about half an hour, so were quite surprised (and scrambling to fix the indecent states our states were in, being indecent and unclothed) when the doorbell rang some five minutes later. “But…but…she promised us half an hour!”

Was it cunningminx? Oh, no. It was a babble of Jehovah’s Witlesses, come to preach the good news that a Zombie Messiah had risen from the dead to pardon us from a collective sin visited upon us when a woman made out of a rib was persuaded by a talking snake to eat an apple.

Anyway, they left some literature, which included on its cover this picture of Christ the Messiah: 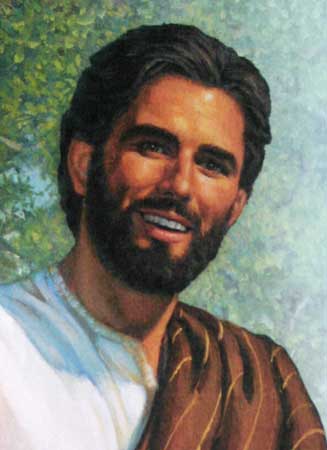 The first thing I couldn’t help but notice is that, my, that Jesus looks awfully Caucasian for a Middle Eastern Jew. cunningminx also observed that he clearly uses Product in his hair, and his beard is remarkably neat for a person living in the desert in a pre-industrial society.

He’s got great teeth, too.

I had no idea that Jesus was a metrosexual. The things one can learn from Watchtower publications…why, they’re nearly as informative as Chick tracts!