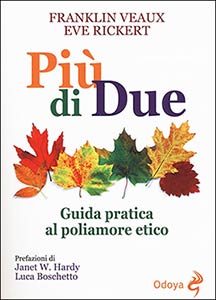 In the universe we live in, the publisher signed an agreement, but then never made the payment that would have activated the rights transfer. They also added a foreword without consulting with us first, something explicitly forbidden in the agreement.

Okay, so that’s shitty and all, but the place where things get especially weird is that so far, every Italian person we’ve talked to about this has nodded sagely and said, “Well, yes. That’s Italy.”

Since things have gone sideways with the Italian publisher, I’ve heard a number of stories of commiseration from Italians. This is, it seems, about par for the course when one sets out to do business in Italy.

Which is really weird, when you think about it.

But I didn’t come here to complain about the Italian publisher of More Than Two. I came here to talk about game theory.

Say you’re a businessperson who deals with a certain…unsavory element buying and selling products you legally oughtn’t. Say that, for your security and that of your clients, you always do business anonymously. You don’t know who your clients are, they don’t know who you are, and never the two of you shall meet. You do business indirectly: you leave a suitcase full of money under the tree stump at the old Dearborn farm, and your client leaves a sack with the shady goods under a trestle out by the abandoned railroad bridge.

This is a variant on the Prisoner’s Dilemma problem, which I’ve touched on before in the context of polyamory. This is a classic problem in game theory. You have a choice: leave your money or leave an empty suitcase. Your mystery client has a choice: leave the goods or leave an empty sack. If you both leave what you’re supposed to leave, you both benefit. If one of you leaves what you’re supposed to leave and the other leaves nothing, then whoever left nothing makes out double–he gets the money and the goods. And if you both leave nothing, neither of you loses but neither of you gains, either.

The temptation, then, is very strong to defect.

Ah, but what if you don’t have just a single exchange? What if you have a standing arrangement where you do the transaction every Friday night at midnight? If your mystery partner defects, you will naturally lose trust, and you’ll have no reason to cooperate. But if both of you defect all the time, neither of you is getting what you want! Presumably you want the goods more than you want the money, and presumably they want the money more than they want the goods, or else you’d never agree to the exchange. So what benefit is there in both of you practicing an all-defect strategy?

Most of the time, we know the other player in these games; it’s rare the other side is totally anonymous. It’s also rare each side is powerless to seek redress if one party defects. In fact, you could make a case for the notion that’s what civilization is: a system designed to prevent people from practicing an all-defect strategy without consequence.

We are a social species. Social entities have to work together. If everyone defects all the time, social structures break down. This is, in fact, hypothesized as the root of altruism: for social species, altruism has positive survival value. Working together, we can accomplish more, and survive challenges we can’t survive apart. (There’s a book about this, in fact; it’s called The Evolution of Cooperation.)

But there’s no getting around the fact that defecting does offer a short-term payoff, especially if you do it and your partner doesn’t. And there’s a huge penalty for cooperating if your partner defects. Them’s the facts.

In most human societies, most people cooperate most of the time. In some societies, however, it seems people are more prone to defect.

The Italian publisher applied and all-defect strategy with us. They defected when they didn’t pay us, and defected again when they added a foreword. When we complained, they said they’d stop selling the book until we resolved our differences; and while we were in the process of negotiating with them to do so, they defected yet again, continuing to sell and advertise the book when they’d said they’d stop. And then, when we complained again, they said, “Ok, sue us, Italian courts are so slow it’ll never go to trial–and even if it does, we don’t have any money anyway.”

So finally, we stopped trying to negotiate, issued a statement, and started filing takedown requests. From the publisher’s perspective, this probably felt like a defection. And neither we nor the publisher got what we wanted. And everyone shrugged and said, “Yeah, that’s Italy for you.”

Worse, the fact that we pulled the plug probably validated the publisher’s idea. “See,” they might say, “this is why we behave the way we do–because, look, people are always screwing us!” When you practice an all-D strategy, your partners are going to defect too. Which means you should defect, because they’re going to defect, so why should you be the only chump cooperating?

But here’s the thing: Since we are, arguably, evolved to be cooperative; since most of the encounters we have are not one-off exchanges (and even if they are, word gets around–if you screwed your last ten customers, the eleventh might not want to deal with you); and since societies need some minimum level of cooperating in order to function…why do we occasionally see places where people appear to play an all-D strategy?

One person Eve and I have spoken to has suggested that Italy has such a long history of corrupt, dysfunctional politics and essentially broken legal systems that people have developed a habit of breaking rules, simply because in a corrupt society, you must break rules simply to get anything done. This pattern has played out in Russia as well, another place where, it seems, all-D strategies are common. If that’s true, it would seem to create a perfect storm of positive feedback: people begin to defect routinely, as a matter of course, because the social systems have become dysfunctional. This causes the social systems to become more dysfunctional, because societies in which many people tend to defect are intrinsically dysfunctional. That increased dysfunction causes more people to defect more often in their exchanges with others, which leads to greater dysfunction, and so it goes.

Which, if that’s true, bodes ill.

There is, right now, in the US White House, a person who has made a career of defecting. The Cheeto-in-Chief is notorious for screwing his contractors, his vendors, and his financial backers; that’s why he ended up in bed with Russian banks–American banks refuse to do business with him. His Orangeness has surrounded himself with people who also tend to practice all-D strategies; indeed, one could argue that the Tea Party was virtually built on a foundation of all-D behavior.

I fear that, if this idea becomes entrenched enough in US society, it will become normalized to defect as a matter of course, in all kinds of business and social interactions. Once that positive feedback loop sets in, I’m not sure how, or if, it can be reversed.

And people will sigh, and nod, and say, “You got screwed by an American company? Yeah, that’s the Americans for you.”

A society that works this way will never remain a world power. (Russia, I’m looking at you here.)