I brought it with me the next time I visited her, where it sat in the sex toy case (because of course there’s a sex toy case) unused. 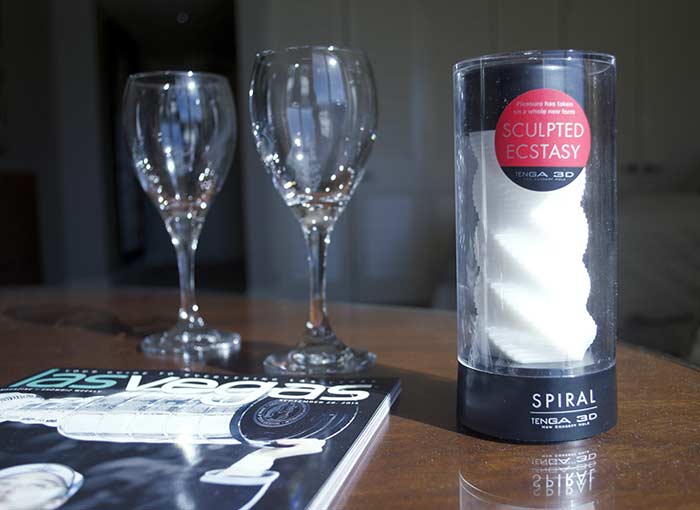 This is what it looks like in its case, all futuristic and funky and spirally and stuff.

Shortly after the book More Than Two was finished, Eve and I found ourselves in the Deep South, talking polyamory to folks in North Carolina. We stayed at a remote cabin deep in the woods, because remote cabins deep in the woods have figured prominently in our story together almost since the beginning, where it came to pass that we were making out and getting ready to get jiggy with it.

And then, out of the blue, she starts wrapping rope around me.

Now, normally I’m more the tie-er than the tie-ee, if you will, so this came as a surprise to both of us. But before long I was lashed down helpless, and she was digging through the sex toy case, and she found the Tenga. “Hmm,” she said, “I wonder how this works?”

So what you see when you look at it in its case is actually the inside. You turn it inside-out to use it, which makes it look rather less futuristic and funky and spirally and stuff. 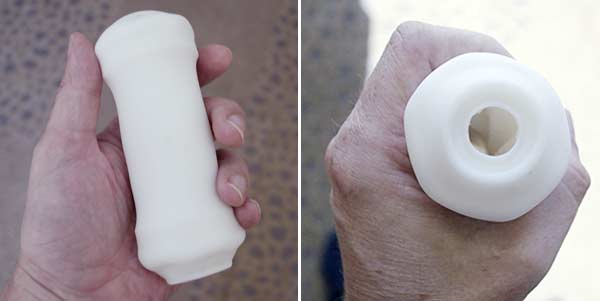 The funky spiral bit is actually the bit that goes against your bits, if you catch my drift.

So she squirted some lube in it and crawled over to me, a gleam in her eye and high-tech, advanced-materials-science silicone in her hand. I, of course, didn’t do anything, being tied quite securely to the bed with a very limited range of things I could do. Other than scream, that is, which apparently I did a lot of. Or so I’m told. I’m not really sure; that’s not what I was paying attention to.

So the whole point of a male masturbator is, as near as I can tell, to put something twixt you and your hand (or your partner’s hand) for the purpose of either better simulating the feeling of a human vagina or changing up the sensation, depending on the deign objective of the object in question. The Tenga toys generally seem to dispense with trying to simulate actual intercourse in favor of creating a host of new and pleasant but distinctly non-human-vagina-like sensations, and this they do splendidly well.

Bottom line: This thing feels really good. It’s very soft but also interestingly textured, it conducts heat well, and it does precisely what it says on the tin.

I don’t actually remember making quite as much noise as Eve says I made, because I was too busy having a mind-blowing orgasm to pay attention to trifles like my own vocalizations. I have no reason to doubt her reports, however. She thought the whole thing was great fun. I thought the state of the art in human pleasure took, thanks to the careful application of materials science to the problem of inducing orgasm, yet another step forward. God bless science.