“What do you want to do tonight?” I asked Eve.

“I’m up for anything,” I said, in a rare moment of underestimating the true meaning of ‘anything.’

“Well,” she said, pointing to her laptop screen, “this looks interesting.”

And so it was we left this plane of reality and stepped into William Gibson’s version of 2014, as seen from the mid-1980s.

It wasn’t actually our intention to travel to a dystopian alternate reality, you understand. We were looking for an evening’s casual entertainment, and didn’t feel like watching Guardians of the Galaxy. So she did a Google search, and found a thing called Richmond Night Market.

If Canada had truth-in-advertising laws, the name “Richmond Night Market” might raise eyebrows at whatever regulatory bodies (tribal meetings of Kurgan warriors? Men in polar bear skins pounding on each other with long decorative spears?) may exist in the bitter frozen wastelands of the North.

“Richmond Night Market.” It’s what you might call a flea market with unorthodox hours, or perhaps a weekly gathering of fishmongers selling wares straight off the boat to the finest sushi restaurants in downtown Vancouver. “Richmond Night Market.” The name conjures wholesome images of open-air commerce, the sort of place where one might go to buy a new china bowl for serving fruit punch in.

One would not expect, from the name, a gigantic rubber duck. Nor a dystopian world of stimrunners and outlawed bioactives, shivs and black docs.

We got there after sunset. The line already wrapped around the fenced perimeter, snaking beneath massive concrete pilings supporting the whining elevated trains. Loudspeakers encouraged us to buy books of passes, which would get us in at a discounted rate. Eve climbed a bit of broken concrete and leaned over the perimeter fence for a picture. 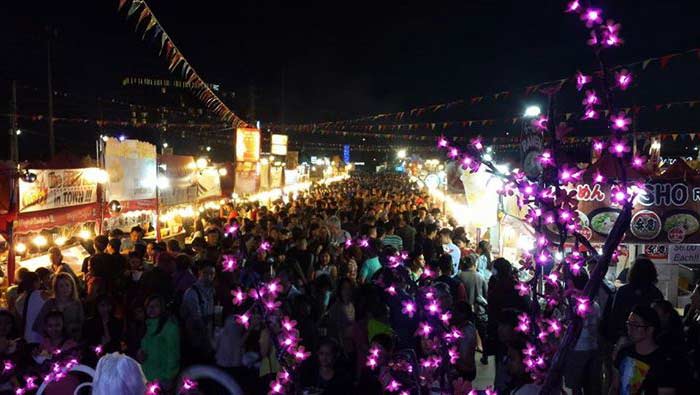 We eventually made our way in, via a quick bit of social engineering to persuade the people in line around us to pool our resources for a passbook (“skip the line!” the cute Asian woman hawking them said. “Save fifty cents!”). Passbook in hand, our ratag group went to the special entrance, and stepped through the perimeter into…into…

If Ridley Scott decided to do an adaptation of Neuromancer, this is where you’d go to find a Netrunner. If Neal Stephenson were to reimagine Snow Crash as a Canadian made-for-TV series, you might find Raven here, scowling and skulking among the stalls. If I ever run a postcyberpunk RPG, this place will be there, somewhere, a glittering Easter egg of neon and LEDs waiting for the players to find.

On the surface, the Richmond Night Market is an open-air collection of vendors selling wares. But such a simple explanation fails to do justice to it, in the way that describing the Great Pyramid of Cheops as a “big pile of rocks” or the combined works of William Shakespeare as “a bunch of words about people being awful to each other” fails to convey the pure Platonic essence of these things.

Richmond Night Market is an open-air collection of vendors selling wares. But such a place it is, and such wares.

Upon entering the Richmond Night Market through the special, skip-the-line-with-your-magic-passbook gate, one is confronted with a riot of bright lights and busy signs, most in Chinese and English, some in Chinese only. Crowds of people flow like oil through the interstitial spaces between the stalls, while vendors work busily to separate them from their money.

We passed hastily-erected tents offering e-cigarettes (“Vape! Vape! Better than smoking!”), small radio-controlled drones with cameras on them, and long black swords (“buy one, get one free!”). Next to the stall selling smartphone accessories was another selling DNA typing (“put your name on the registry! Find an organ donor!”). A dazzling display of laser lights led to a bored-looking woman with a collection of drop knives and canisters of pepper spray. Across from her, another booth offered stem cell tissue typing (“must be between 18 and 35,” the stern-looking woman said). Around the corner, we found small paper buckets of battered squid tentacles, deep-fried Mars bars, and computer services (“Unlock your phone! Run any software! Any software you like!”) Eve accepted a sample of exotic tea in a tiny paper cup that leaked. “They don’t seem terribly interested in selling tea,” I said. “Probably contraband biologicals in the back.”

At one booth, a dour-looking man about the size of Philadelphia stood with his arms folded. A small sign was propped against the table, showing two exuberantly muscled men standing back to back, one holding a sword. “What do–?” I started to ask. He growled. “I’ll just keep moving, then,” I said.

Signs tied to an enormous rubber ducky with bits of nylon rope promised a Magical Candyland. We wandered around, blinking, until we found it: a low concrete wall with flaking paint, behind which a couple of elderly women sold lollipops from a yellowing plastic bin. I didn’t ask what the magic was; I’m still not entirely sure I want to know.

A momentary turbulence in the flow of people disgorged a friend of Eve’s. “I found pens!” she said, before the crowd swallowed her again. “Hello Kitty!” Behind her, a man dressed as a panda sold airline tickets to mainland China. “Samsung TV!” said a guy to my right. “True 4K! Only $3,000!”

“Who the hell,” I asked Eve, “comes here and drops three thousand bucks on an impulse buy?”

We wandered through the noise and mayhem, feeling a bit like the main character of Zero Theorem at the party. Everyone around us seemed to move with purpose, crowds of people here each with an agenda, and almost none of those agendas involving Hello Kitty pens. Eddies swirled in the crowd, looking random–one in front of the DNA testing tent, another at the place selling drones. “Vape! Vape! Run any software! Tissue typing!” A crowd gathered in front of the booth advertising “The secret knowledge of the Bible, what Jesus REALLY said!” and disappeared just as quickly.

Eventually, the flow of the crowd deposited us near where we’d come in. “So, um,” she said, “are you ready to leave? Because this place–”

We headed out empty-handed. I was too old for tissue typing, didn’t have a spare three thousand dollars for a new TV, and wasn’t sure I wanted to start trafficking in restricted biochemical agents just that evening.

Still, I will admit to some nostalgia for the days when we thought dystopia would mean netrunners and celebrities with Zeiss Ikon eyes, rather than the dreary same-old same-old of run-of-the-mill corporate malfeasance and Middle Eastern war we ended up with. We had, for a brief, shining moment, a taste of the more interesting ways society might have run off the rails, and that world seemed so much more fascinating than the dystopia we settled for.